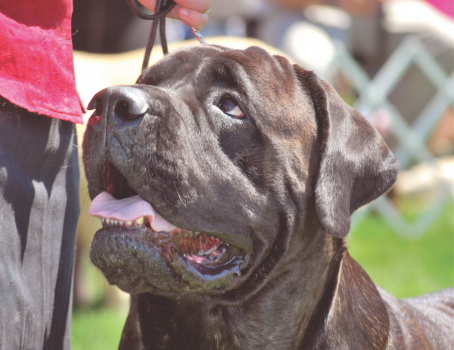 This brindle bitch has a correctly sized and placed ear, which contributes to her very typey head. Photo: Denise Flaim

Lend Me Your Ears

Just, please, if you’re a Mastiff, don’t let them dangle!
By
Denise Flaim

This is a small story about a relatively small feature of Mastiff type. But then again, to paraphrase an old idiom: Type is in the details.

While Mastiffs have ears that are arguably longer than some other Molossers – including Bullmastiffs and Dogues de Bordeaux – an overly long ear is the bane of a Mastiff breeder.

Size is not the only problem with incorrect Mastiff ears: Set is an issue, too. The ear should be placed high, with their base on the lateral margins of the skull – not low, toward eye level, which evokes a Bloodhound. This fawn bitch head demonstrates that long ears are often accompanied by a long, snipey muzzle. The result is more Bloodhound type than Mastiff.

Breeder-judge Dr. William Newman of Bedford, Pennsylvania, says that at its lowest point, the Mastiff ear should not extend beyond the black beauty mark that each dog has behind its cheek. “When they get that long, the tip of the ear tends to turn, like earrings,” he says. “It completely destroys the head. It doesn’t look like a Mastiff – it can look like anything but.”

Instead, what’s desired is an ear that is held tight against the head, practically right against it. Newman also notes that many times, long ears are accompanied by a slightly snipey or overly long muzzle.

Newman says he seems to see more incorrect ears today than in years past, though he can’t say if that’s because the problem has gotten worse, or if there are simply more Mastiffs around. What he does know is that breeders who want to breed a dog or bitch with this fault should take care to find a mate who has a strong foundation of good ears in his or her pedigree. A Mastiff from the late 1980s showing proper ear length and placement.

“A lot of people think, ‘So what?’ They don’t think it’s important,” Newman says. ““But it is a pesky thing to get rid of.”   In the end, while ear length is not a functional concern, maintaining good head type should be important to Mastiff fanciers.

“The Mastiff is not a head breed – it’s a working breed in which the head is very significant,” Newman explains. “We don’t want Mastiffs that look like Goofy or Pluto.”

AKC Mastiff standard: “Ears small in proportion to the skull, V-shaped, rounded at the tips. Leather moderately thin, set widely apart at the highest points on the sides of the skull continuing the outline across the summit. They should lie close to the cheeks when in repose. Ears dark in color, the blacker the better, conforming to the color of the muzzle.”

FCI standard and KC/UK standard: “Small, thin to touch, wide apart, set on at highest points of sides of skull, so as to continue outline across summit and lying flat and close to cheeks when in repose.”

A look at ears in other Molosser breeds: AKC standard: “V-shaped and carried close to the cheeks, set on wide and high, level with occiput and cheeks, giving a square appearance to the skull; darker in color than the body and medium in size.”

FCI and KC/UKC standards: “V-shaped, folded back, set on wide and high, level of occiput giving square appearance to skull which is most important. Small and deeper in colour than body. Point of ear level with eye when alert. Rose ears highly undesirable.”

Food for thought: “Although the Bullmastiff standard calls for medium ears, with Bullmastiff ears I like to see the smaller the better, the darker the better,” says breeder-judge Helene Nietsch of Banstock Bullmastiffs in Newtown, Connecticut. “A larger, low-set ear gives the head a more ‘houndy’ appearance, and ears that are too small and too high set and too ‘rose’ are equally incorrect, giving the head a more ‘Bulldog/Staffy’ appearance.” AKC standard: “Set well above the cheekbones. May be cropped or uncropped. If cropped, it is in an equilateral triangle. If uncropped, they are medium size, triangular in shape, held tight to the cheeks, and not extending beyond the jaw bone.”

FCI standard: “Triangular, drooping, with a wide set on high above the zygomatic arches. Often cropped in the shape of an equilateral triangle.”

Food for thought: Here is yet-another Molosser where a too-large ear hurts type. “When the ears are pendulous and hanging down, it changes the look of the head,” explains Shauna DeMoss of Castlegard Cane Corsos in Cedaredge, Colorado. “It blurs the square line around the cheek, rounds out the head, and brings down what should be a very uplifting expression.”

Like many American fanciers, DeMoss strongly prefers a cropped ear, though that can ruin a Corso head, too, if done improperly: “Sometimes they either crop too long, like a Doberman or Dane, visually elongating the head, which we don’t want – we want square and blocky,” she says. “Or they do a rounded cut” – sometimes called a “battle” or “bear” cut – which removes too much of the ear and also creates an undesirably rounded appearance.

What DeMoss strives for is what the standard describes: “A nice, equilateral triangle, as tall as it is wide, with a nice point standing erect.” AKC standard: “High and laterally inserted, set well apart due to the width of the skull. Functionally, they should be cropped and erect, in triangular shape and with a length which does not exceed 50% of the front edge of the auricle of the natural ear. Without being cropped, they are of mid-length, broad, thick, flat and rounded at the tip. Covered with smooth hair which is a bit shorter than on the rest of the body; they may show small spots, not to be penalized. In natural position they hang down covering the back of the cheeks. When the dog is alert they may be half-erect.”

FCI standard: “Set high, lateral, well apart due to the width of the skull.  Functionally, they should be cropped and erect, in triangular shape and with a length that should not exceed 50% of the front edge of the auricle of the natural ear.  Without being cropped, they are of medium length, broad, thick, flat and rounded at the tip. … Covered with smooth hair which is slightly shorter than on the rest of the body; they can have small spots, not to be penalized. … In natural position they hang down covering the back of the cheeks. When the dog is alert they may be carried semi-erect.”

Food for thought: The right size for a natural ear on a Dogo is about on par with the ear on a Labrador Retriever, says Pam Gilley of Mata Cerdos Dogo Argentinos. “And Dogo ears do fold a lot, not so much like a pitbull, but more like a Bull Terrier trying to get its ears up,” she says. Dogos usually have very strong ear cartilage, oftentimes with extra tissue and bumps at the bottom of the ear that are often not removed during the crop. When the ear is viewed from the front, these “earrings” interrupt the smooth outline of the cropped ear. Typically, less is more with Dogo crops, and males are often cropped slightly shorter than females. Gilley says she usually brings the crop on a male just to the end of the ear where it folds over to join the head, which is very pronounced in the Dogo; bitches are cropped just a bit above that. AKC standard: “The ear is small in proportion to the skull and of a slightly darker color than the coat. The front of the ears’ base is slightly raised. They should fall back, but not hang limply. The front edge of the ear is close to the cheek when the dog is attentive. The tip is slightly rounded, and should not reach beyond the eye. Set rather high, at the level of the upper line of the skull, thus emphasizing the skull width even more.”

FCI standard: “Relatively small, of a slightly darker colour than the coat. At its set on, the front of the base of the ear is slightly raised. They must fall down, but not hang limply, the front edge being close to the cheek when the dog is attentive.  The tip of the ear is slightly rounded; it must not reach beyond the eye. Set rather high, at the level of the upper line of the skull, thus appearing to accentuate its width even more.”

Food for thought: Judges often check for a Dogue ear that does not reach beyond the eye by pulling the ears forward – a welcome sign, says Jennifer Roberts of Rising Star Bordeaux in Lafayette, Colorado. “There are certain bloodlines that tend to produce larger ears, and it seems they are getting more common – some I have seen reach the chin,” she continues. “To me, ears that are oversized take away from the overall essence of a Dogue head.” Also a problem, she adds: Ears that are badly or too high set, and rose ears. AKC standard: “Set well above the cheekbones. May be cropped or uncropped, but are usually cropped to an equilateral triangle for health reasons. If uncropped, they are medium sized, triangular in shape, held tight to the cheeks, and not extending beyond the lower margin of the throat.”

FCI standard: “Small in relation to the size of the dog, of triangular shape, set above the zygomatic arch, they are flat and close to the cheeks. When they are cropped, they have the form of an almost equilateral angle.”

Food for thought: Like most Molosser breeds, a natural ear on the Neapolitan Mastiff needs to avoid houndiness, ideally not extending beyond the jawline and only slightly turned out where it frames the face.

“Whenever you see a faulty ear, the front tip by the cheekbone sticks out too much,” says Lena Moles of Whispering Oaks Mastini in New Ulm, Texas. She notes that cropped ears tend to be either Italian style, where the ear is laid down on the top of the head, or American style, where it forms the equilateral triangle outlined in the standard.

Moles adds that the size of the triangle depends on the ear cartilage – the stronger the cartilage, the longer the crop can be without risk of the ear eventually flopping. “That is the real key – a combination of the dog’s genetics and the vet’s skill,” she explains. AKC standard: “Ears: Medium size, V-shaped, pendant, set-on high, dropping forward and hanging close to head. Raised when alert, level with the top of the skull. The ear leather is thick, covered with soft short hair, and when measured, should reach the inner corner of the eye. Low-set and/or hound-like ears to be severely faulted.”

Food for thought: “Because of the different varieties and types within the breed, there is tremendous variation in the size and length of the ear,” says breeder-judge Richard Eichhorn of Drakyi Tibetan Mastiffs in Palmdale, California. “Most important is the higher set and V shape of the ear. They are to be set high, hanging closer to the head with a drop forward. It is important that they are level with the top of the head when alert.”

“Larger heads should have proportionately larger and longer ears,” he concludes, “always reaching at least to the corner of the eye.”

© Modern Molosser Magazine. This article may not be reposted, reprinted, rewritten, excerpted or otherwise duplicated in any medium without the express written permission of the publisher.
Sun, 09/06/2015 - 11:33pm