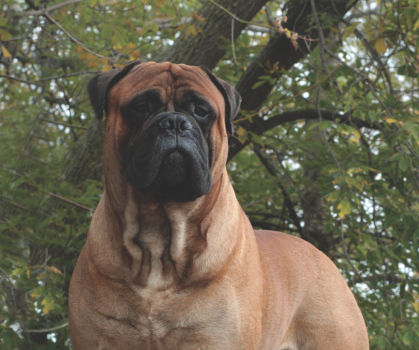 Who was the prototypical Bullmastiff?
By
Pam McClintock
I think it is probably safe to say that the modern-day Bullmastiff is an indeed somewhat changed beast from the night dogs that roamed the forests in the late 1800s.
In that frenzied and relatively anarchistic time in England, it was most important that the night dog be keen, agile, silent and tough. The keenness was necessary for him to want to do his job with precision and determination. Agility allowed him to move easily over and through rough terrain, while lightness of foot made him a silent adversary. A tough dog was not deterred from his duties. He could and would take a man down with the swift and lightning-quick reactions that were such a necessary element of his character.
Exactly how did the forebears of our Bullmastiffs become such a compelling and necessary commodity? It had long been determined that a canine with a formidable appearance and strong constitution was needed to combat the theft and blatant disregard for law and order that permeated the land. Mastiff types were far too large and clumsy to be of significant advantage when apprehending a poacher. Smaller Bulldog and Terrier types were so aggressive that they would savage a man quickly and often without any justification. It was paramount that a canine of large size and bold temperament be utilized. The prerequisite of the night dog was not to kill or maim, but rather to overtake by the power of his stride and propulsion of his body, allowing him absolute control and a defensive stance over the poacher. Do I think that the night dog may have frequently bitten his opponent? More than likely this act would have occurred, as dogs are by nature oral creatures. But the most correct and proper night dogs used the power of their body and their terrifying form to engage their foe. 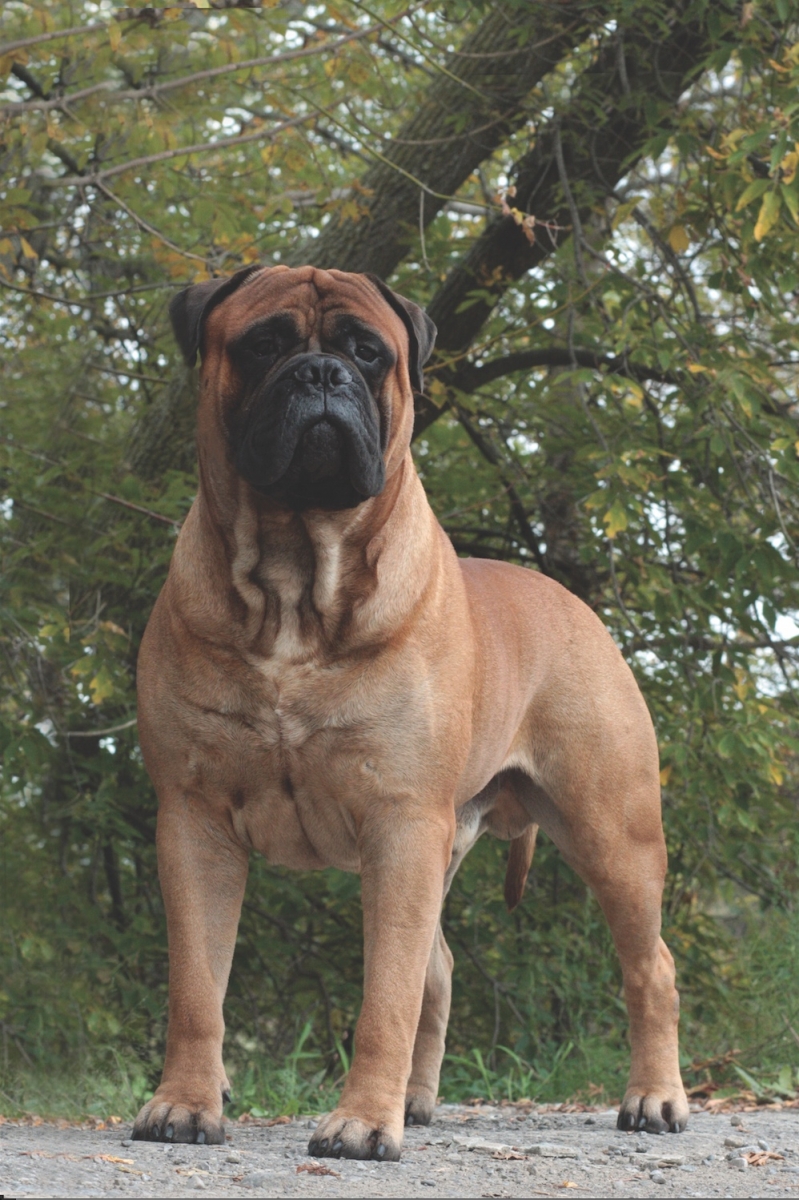 Undoubtedly the early night dogs averaged perhaps 80 to 90 pounds and wore a brindle coat. Many depictions might put the height of the dog in roughly the same parameters as is demanded now. The above-mentioned weight would still allow for a wiry and lithe canine, but with the musculature and size needed for multi-tasking. He needed to be able to move about well on the open land as well as in the king’s forests, while at the same time maintaining a quiet stealth. He could not hunt or chase down game; acute hearing was imperative, and he probably air-scented, or perhaps he even was able to track well. Bursts of speed and quick changes in direction would propel him toward the poacher. And just when the adrenaline rush would have him poised for the kill, a part of his brain demanded acquiescence, and he submitted to the leap, down and hold stance, brilliant in his independent thinking and unerring ability to be the gamekeeper’s most respected assistant.
What an amazing, diverse canine athlete! Here was a stout and strong warrior, a tracker, a hunter, a trotter and runner, a guardian and a thinking, loyal protector. What do we know of his sojourns into the fields and forest and what bodily mechanisms would have allowed him to go about his appointed rounds? Surely his skeletal structure and muscle mass contributed to the strength and agility that were so important for his tasks. This dog might have walked, trotted or galloped for many miles to find and reach his quarry. He would have cast about in the dense brush of the forest or might more easily have trotted the lanes and paths that crisscrossed the estates. He must have been a “moving” machine to withstand the rigors of nighttime hunting and the many hours that he may have spent searching and quartering the land in his quest for the poacher.
We are familiar with the educated and near exacting measurements that sort our canines, one from the other breed, and one from the other within a breed. Those with the most perfect bodily conformation measurements are the chosen ones, while the lesser measured fall through the cracks of the breeding scale. In the early days of the Bullmastiff, as he slowly evolved into a breed with a standard, what if any emphasis was placed on shoulder angles, bone lengths, stifle bend or body length? Probably little; rather, the importance was on the creation of the night-dog type with an addition of substantive form and function that allowed the animal to breed true to a certain look and style. But when the look was right, no doubt the structure was right for the time.
We can be relatively certain that the night dogs were strong, powerful and free moving, or how else did they perform the arduous tasks that were expected of them? The dog must have worked somewhat independently of the gamekeeper and likely covered far more ground during each patrol. In my thinking of those early years, this dog would have trotted endlessly, walked for a time, leaped over low-lying logs or waded through shallow streams, then burst into the forest at dizzying speeds to apprehend the poacher. Surely structure and symmetry would have been an asset during this nightly performance. I think, with a relative degree of certainty, that the night dog/Bullmastiff must have been and should be an effectual trotter. He would not have walked his estate rounds, as to do so would have been painstakingly slow. Neither would he have loped everywhere, as this too would have ultimately been tiring and wasted energy. But a light jog would have carried him forward on smooth ground and through unobstructed fields, thus speeding his progress and maximizing chances for apprehending the thief.
Certainly the Bullmastiff cannot be the Iditarod trotter. That is, the lighterweight, long-distance trotting engine that travels in a relatively straight line from point A to point B. Rather, his ancestors might have trotted in large circles, gradually combing the estate lands further afield from the starting point until a thief was detected, then employing the rocketing speed for the final knockdown and pin. And without doubt, as he maneuvered his circles throughout the area, his methodical trot would have given way to walks while pursuing a scent or lightly loping onward when the current area was devoid of interest.
Certainly, a sturdy body and substantial form carried on good legs would have been a great asset, allowing the dog to work efficiently. Combine this outward appearance with a splendid mind that included ambition, courage, loyalty, tenacity and fearlessness, and the end result is a synchronized, intelligent canine. 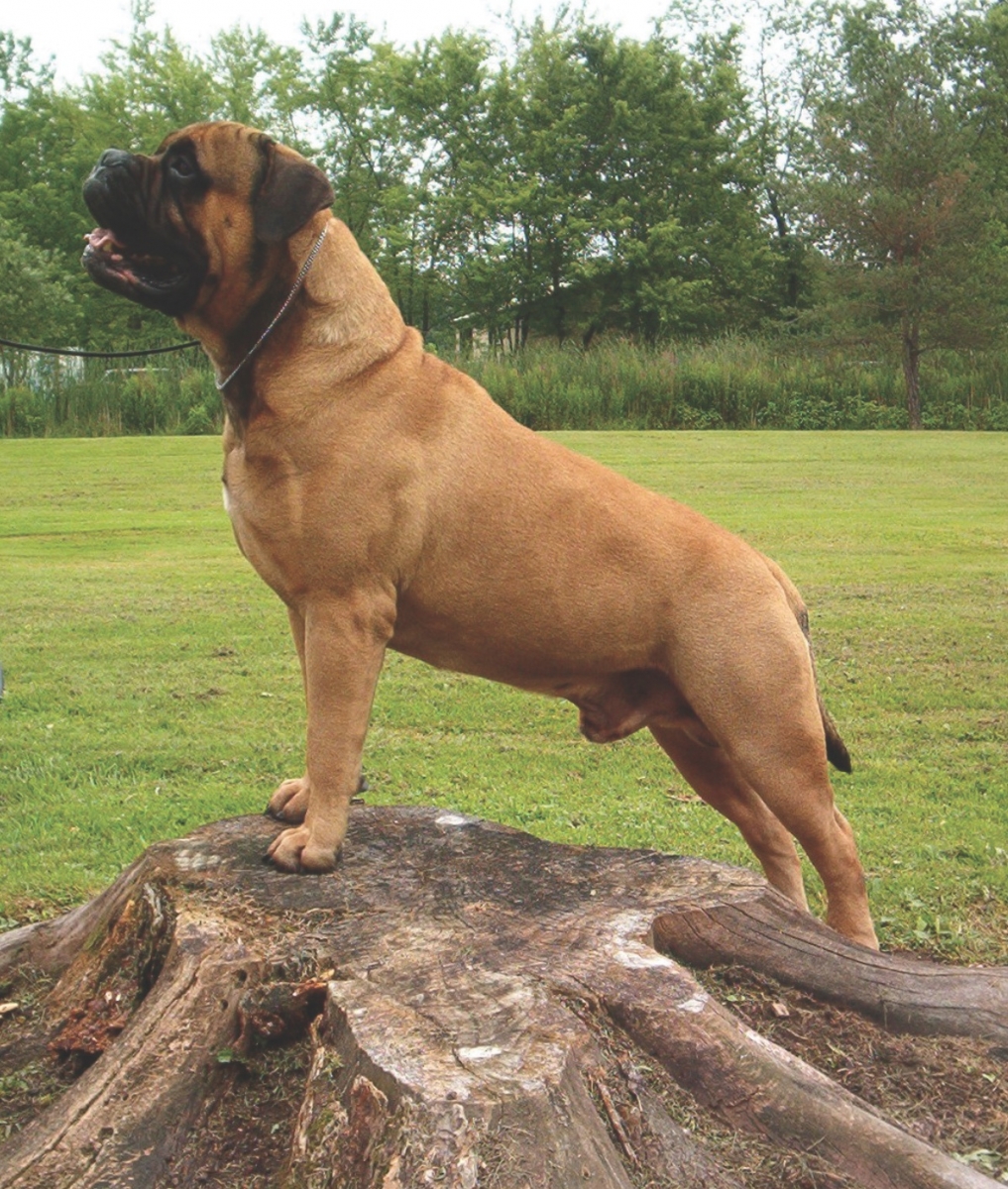 As the Bullmastiff was fashioned from austere beginnings, it was imperative that he retain these original characteristics so that the night-dog tradition did not vanish in subsequent years. The Mastiff and Bulldog combination of that era combined the courage and bulk of the former with the confidence and resolve of the latter. The end result was a unique and quite exceptional dog. With the development and writing of the blueprint (standard), early admirers determined that his legacy not be lost. Thusly the present-day Bullmastiff standards demand sound structure, powerful body, a tractable temperament and that magnificent blocky head that is the crowning glory.
Without doubt, the subtle changes from night dog to purebred dog are apparent. Size has likely increased, and attention to structural detail is paramount. He is a large, imposing guard dog that must be a functional, all-encompassing unit. This is no soft, demure fur kid, but rather a majestic protector and companion. The standards use such phrases as “sound and active,” “movement indicates power and a sense of purpose,” gait “free smooth, and powerful” or “free, balanced and vigorous.” These descriptions of movement originate from the standards of three different countries. In each instance, it is obvious that the Bullmastiff must be an effective trotter, capable of covering the ground smoothly and easily. Further, the massive muscling in the hindquarters enables him to burst into a full gallop in an instant, turn on a dime and propel himself into the air if required. Who among us as owners has not witnessed this amazing ability?
When he is right, the Bullmastiff displays all of the unmistakable distinctiveness of the night dog. The written standards have allowed for traits, style, structure and behavior to be emphasized, thus reinforcing an English tradition born of necessity. We current caregivers must not waver from the blueprint for personal reasons or vain ideals. To do so tarnishes the very reason for the Bullmastiff’s existence. While he may never see a poacher, still history tells us that this was his beginning, and to that end the modern Bullmastiff is a reflection of his heritage.
© Modern Molosser Magazine. This article may not be reposted, reprinted, rewritten, excerpted or otherwise duplicated in any medium without the express written permission of the publisher.
Sun, 03/25/2018 - 4:26pm