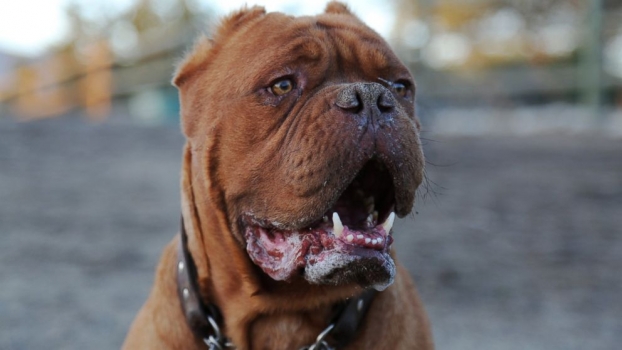 Hooch may be a stereotypical name for a Dogue de Bordeaux. (Thank you, Tom Hanks.) But there is nothing clichéd about the dog that California-based Marley’s Mutts rescued almost four years ago.

The severely abused Dogue was in such bad shape that many at the time considered euthanasia to be the greatest kindness he could have been shown: His ears had been cut off, and the remaining stumps were infected. He weighed 43 pounds – less than half his normal weight – and was struggling with a serious case of pneumonia.
But all that paled in comparison to what the veterinarian found when he took an X-ray:

The Dogue de Bordeaux’s tongue had been cut off at the base.

Hooch had been deemed aggressive by the shelter that had first impounded him because he would growl and bark whenever anyone came to hose out his run: What no one knew at the time was that he was starving and dehydrated, unable to swallow normally, and desperate to communicate his distress. Zach Skow and the dog he calls his “wingman.” All photos courtesy Zach Skow.

“He doesn’t have a tongue to move the food to his molars and premolars,” explains Zach Skow, founder of Marley’s Mutts in Bakersfield, California, who adopted Hooch soon after. Not only does not having a tongue make eating a challenge, but Hooch has a hard time cooling off during hot weather, and the drooling that is commonplace with Dogues is ever-present with Hooch.

Though no one can say for sure, Hooch was likely used as a bait dog to teach fighting dogs to sharpen their skills, and his tongue removal might have been a punishment for barking excessively. Skow feeds him by moistening his kibble with hot water, packing it into a ball and placing it all the way at the back of Hooch’s throat, then holding the Dogue’s head upright while gravity does it job.

When Hooch accompanies Skow on his other kind of rescue missions –visiting alcohol and substance abusers – most react with outrage and anger at the mutilation. “People get taken aback when they see his ears aren’t there,” Skow explains. “And when they learn that he doesn’t have a tongue, it’s a gut shot for most people.”

Skow’s job is to help them see Hooch as the success story he is today, not the victim he was in the past. “The whole point is, he’s fine.” And the unspoken message is that they will be, too. Hooch’s ability to overcome his abusive past and live in the moment is a powerful example for those struggling with substance abuse.

Skow knows all about the transformative powers of dogs: In 2008, he had hit bottom so hard that his alcoholism had left him with end-stage liver disease. He turned to rescuing dogs, which gave him unconditional love – and a purpose in life.

Skow takes his “big orange bear” to visit a whole spectrum of people who can benefit from the power of the human-canine bond: non-verbal autistic children, the homeless, prisoners who are battling severe addictions.
“If you characterize Hooch’s energy, he’s very confident, not timid at all,” Skow says. Though Skow says Hooch “hasn’t met a person he didn’t like,” occasionally he’s pulled back into a past he’d rather forget – especially when a stranger greets him with a loud voice and outstretched hands. “He’ll shy away and recoil from that,” says Skow, who estimates Hooch is about seven years old. Because Hooch’s tongue is missing, keeping his drooling under control can be a challenge.

Skow’s rescue program specializes in “dogs that don’t have any hope of rescue” – dogs that are injured, sick or are hard-to-place bully breeds. In addition to Hooch, Skow’s personal pack includes a Fila Brasileiro named Baloo and Maggie, a 3-year-old Cane Corso who lived a feral life in an industrial park and was totally unfamiliar with human contact. “At one point, I’ve had every type of mastiff,” Skow says, ticking them off: a Neo named Bubba, a Mastiff named Oasis.

Hooch with friends Maggie the Corso and Baloo the Fila Brasileiro.

“I’ve always felt like Molossers are reincarnated humans,” he says. “I appreciate their instincts, which are to guard, and that protector instinct is so interwoven into the fiber that composes them. They help you feel safe – you really feel that they’ve got your back. I love their ability to take direction, and their resilience. They’re just special dogs.”

As for Hooch, Skow calls him “a testament to how we all ought to live” ... with resilience, flexibility, forgiveness — and just enough drool to make it interesting.

© Modern Molosser Magazine. This article may not be reposted, reprinted, rewritten, excerpted or otherwise duplicated in any medium without the express written permission of the publisher.
Fri, 07/28/2017 - 10:23pm