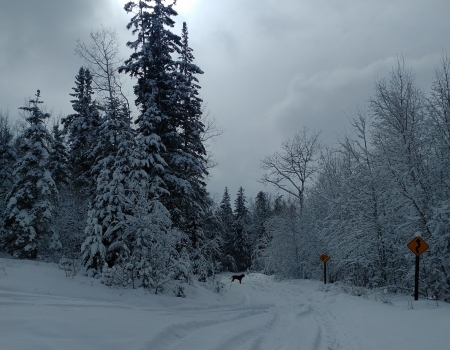 Here’s to the Heartache

Managing the grief when it's time for a Molosser to say goodbye
By
France Turcotte
My eyes opened softly as I glared at the clock. It was 1:27 a.m.
The sound of Ben’s breathing was different than usual. I knew every familiar sound of dogs at the sanctuary, and this sounded like he was in distress. I got up from bed and walked over to him.
Something was not right. Ben was struggling to lift his massive Dogue body, and his back legs were not collaborating. His gums were white as snow, telling me there was no more blood circulating and that this was an emergency. I had just woken up to my worst nightmare.
Ben was dying.
We were 50 minutes from the nearest animal hospital, and even if I tried, I could never get him in the truck and there in time. I knew what was soon to come, as his condition was worsening by the minute.
Moments later, my 187-pound Molosser collapsed to the floor. At 1:57 a.m., Ben took his last breath in my arms as I kissed him gently. The last thing he heard was the sound of my voice, whispering over and over, “Mama loves you so much.”
It was a perfect moment: Peacefully at home in my arms, I felt Ben leave me. He had allowed me to be there with him so I could say goodbye. That was his gift to me.
As I glanced over at his lifeless massive body, I thought to myself: He just looks like he is having a nap. I covered his body gently with a blanket, leaving his head exposed as to selfishly enjoy the last moments I could look at his beautiful face. I kissed him gently over and over and talked about the other dogs he needed to go find in doggie heaven, carefully naming them all one by one. I wanted the moment to never end, but I knew it had to. 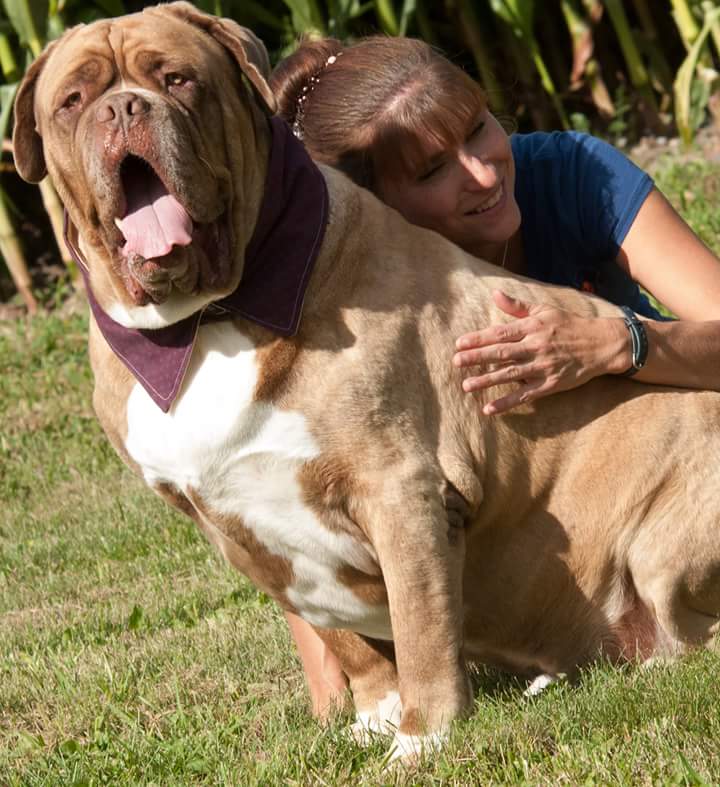 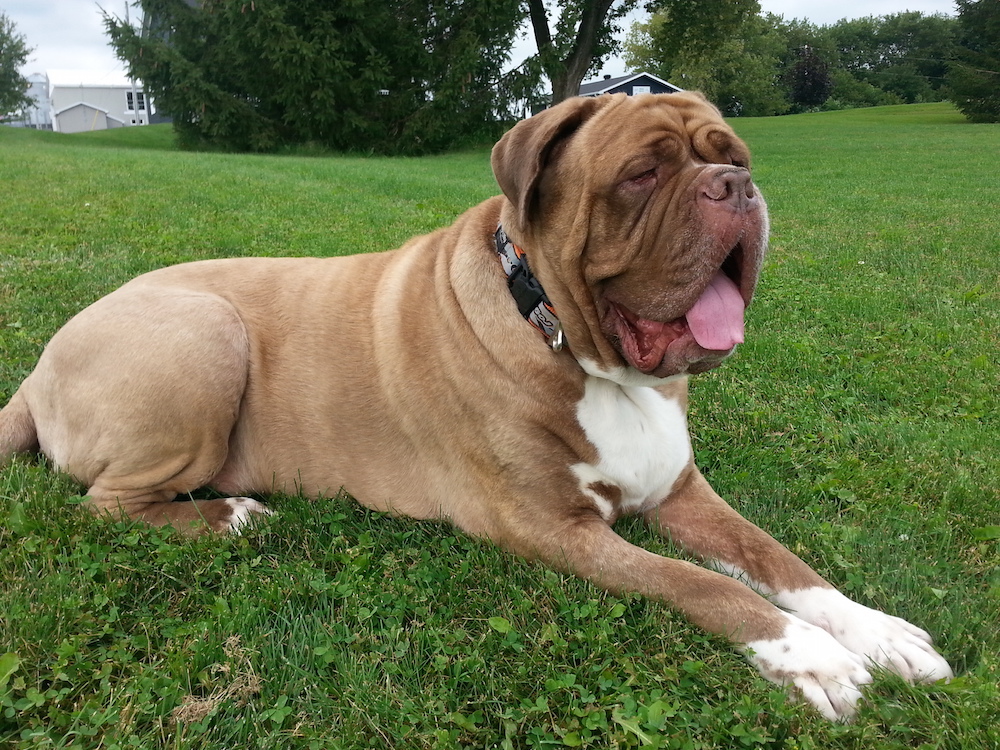 Until we meet again ...
A mistake would be to make important life decision during this time. Some people rush to find a new dog, as if to replace the pain with love. But a state of mind filled with sorrow can’t be much of a productive one. You may be pushed by an impulse to fill the void. Losing a pet leaves quite a hole in your home as much as in your heart. Think about waiting before making any major life decisions. You may feel differently as your feelings of grief lose their intensity, and the changes may add to the stress you’re already experiencing.
There is no textbook recipe to follow when grieving. There is no right way or wrong way.  Feel the emotions, talk about them, cry the tears, scream the anger, but most important, surround yourself with support and with people who care and share your compassion about animals and the special role pets play in our lives. Grief is an authentic, true, almost palpable feeling. Your remarkable true story of you and your pet has just ended, and you may be consumed with emotions or feeling a little lost and alone – especially those who lived alone with their pet.
Over the years, I often wondered if dogs know they are going to die. Although the true nature of that question is a spiritual one, my younger, logical brain once convinced me there was no way an animal or human could know. Then, over the course of many years, dogs sometimes passed away at the sanctuary in a natural way, without the assistance of euthanasia. Every time, they exhibited an unusual behavior that struck me, and I started questioning the connection. At first I thought it was nonsense that I was even considering this, but unmistakably, over and over, it happened: The day before a dog would die, there was always a “moment” in which the dog would do something out of the ordinary. A short-lived moment of pure bliss and perfect happiness, a sudden eruption of energy would take over their body, and in an outburst of excessive joy, the dogs would start running or playing as if they were puppies or goofy teenagers again.
I grew to believe after seeing this happen every time, even if for only seconds, that it was no coincidence. My only conclusion is that maybe death is not the end.  Now, it’s easy for me to recognize these “moments,” and every time I do, my heart fills with a feeling of contentment, love and peace. 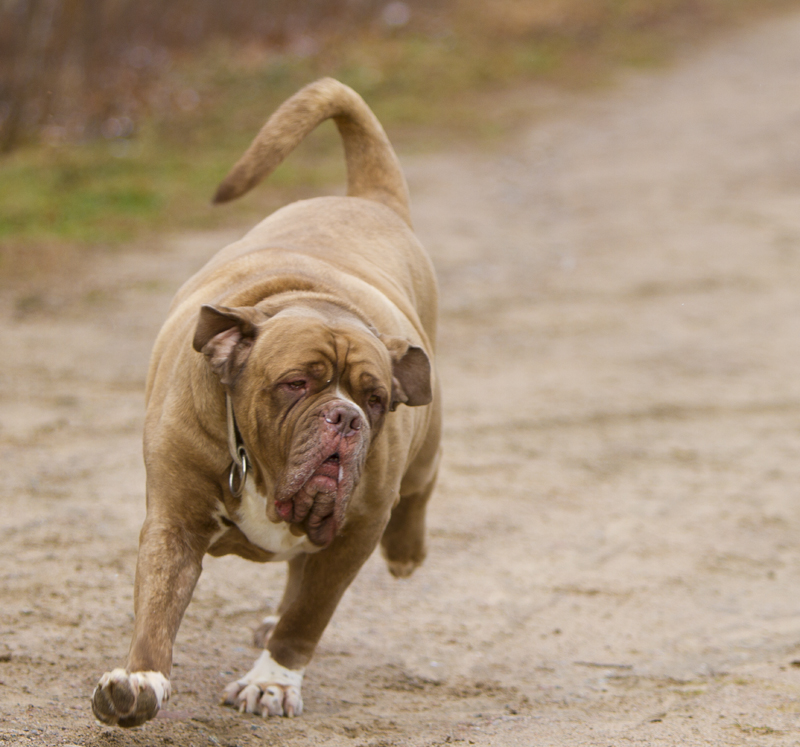 Ben on the run.
The evening before Ben passed away in my arms, we went for our last walk before bedtime. His massive body riddled with arthritis, Ben had not run in more than two years. Pain management could only do so much. Our walks consisted of a slow-paced 10-minute stroll on our wooded trail. It was always the same routine, like snails walking in a parade.
Then, suddenly, Ben glanced over at me, made eye contact and became the young, energetic, playful Dogue de Bordeaux I had known years ago. He pranced and hopped like a young buck, and ran down the small hill heading to our house like he was winning the 200-meter race at the Olympics. He was smiling when I got to the house. Bruno, my other longtime resident Dogue de Bordeaux, followed suit with a confused look.
I shouted at this unexpected event: “Ben! You are running, mon amour!” My heart was content, because I knew this behavior well: My baby boy was saying goodbye. I smiled back and hugged him, trying to wrap my arms around my big boy. As I kissed his head, I made peace with what was about to come. It was the only thing I could do.
The path you choose to take in your process of grieving is yours alone. Walking those footsteps and realizing that your life will never be the same is a bittersweet victory. Make a new beginning once your heart has healed just enough to consider squeezing enough room for the love of another best friend. And if it’s a Molosser, better be ready for the adventure. 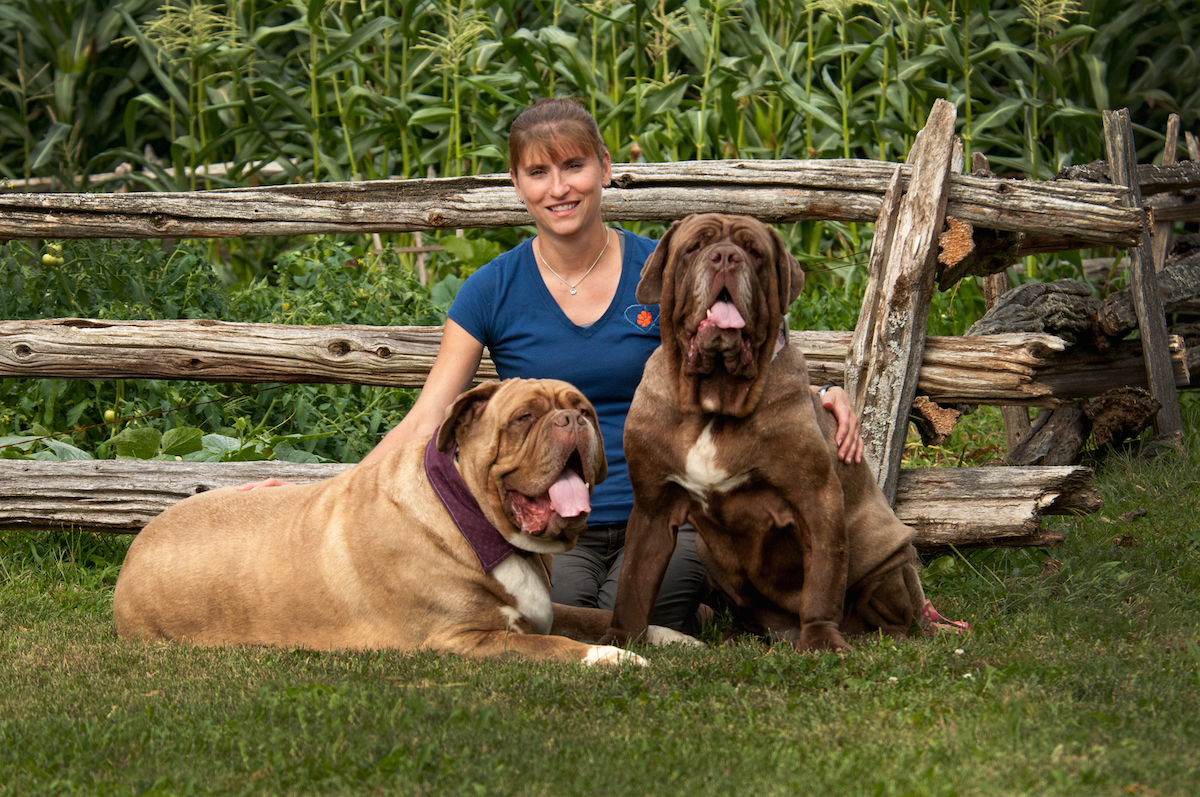 France Turcotte founded Valley Mastiff Rescue in 2008. Surrounded by dogs from early childhood, her first job was in a boarding kennel, which is where she saw her first Mastiffs, and fell in love with the breed. Her Quebec-based sanctuary welcomes Dogues de Bordeaux, Neapolitan Mastiffs, Bullmastiffs, Mastiffs and Bulldogs, and will also help related Mastiff breeds in need. Certified in canine nutrition, Turcotte’s other interests include natural and alternatives medicines, herbalism, the healing power of food and canine behavior.
© Modern Molosser Magazine. This article may not be reposted, reprinted, rewritten, excerpted or otherwise duplicated in any medium without the express written permission of the publisher.
Fri, 08/24/2018 - 6:38pm