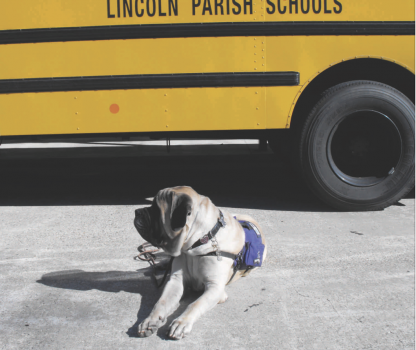 This gentle, super-sized Mastiff is a role model to disadvantaged schoolkids.
By
Denise Flaim
The two 13-year-old boys, angry and agitated in this Louisiana classroom – where poverty, broken families and behavioral problems are as common as the graffiti on the desks – faced off. As they inched closer to each other’s faces, it was clear a fight loomed. And the grown-up in the room, Natalie Allouche, knew she was no match for their near-adult size, or their bottled fury.
Then, a 200-pound mediator ambled over. Ed the Mastiff delivered an elegant head butt, positioned himself between the two, and stared. His message was clear, and the boys listened, returning wordlessly to their seats.
There are therapy dogs, and then there are therapy dogs.
In September 2008, on a shoestring budget of $50, Natalie, a former oncology nurse and certified humane-education specialist, founded Brothers in Arms, an accredited program that addresses the anger, frustration and grief of at-risk grade-schoolers. Twice a week for an hour, Natalie and Ed meet with eight fifth-grade boys and girls in a pilot program that teaches self-respect and coping skills – with the help of what Natalie cleverly calls M.A.T., or Mastiff Assisted Therapy. 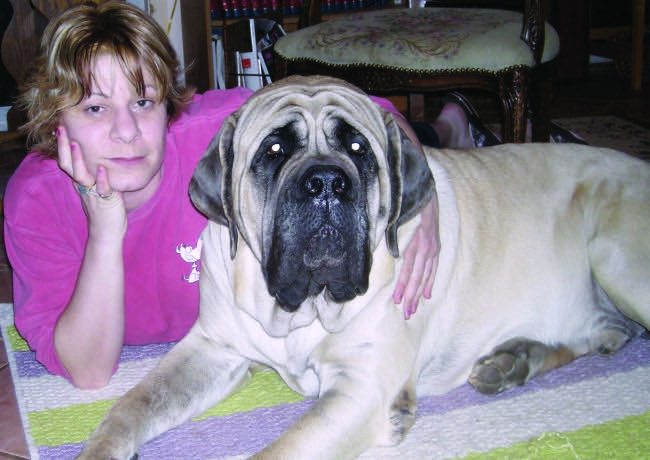 Natalie Allouche with Ed.
“The children say, ‘We just like the fact that he is so big, so cool, and so all right with himself,’” says Natalie of 2-year-old Ed. “They realize that such a big dog has nothing to prove, and his gentle demeanor and presence are a form of reassurance for them. He broke a lot of barriers and stereotypes, which was so good for the breed. If I had a poodle, that wouldn’t be happening.”
Natalie, who lives in the Piney Hills of northern Louisiana, knows full well the healing power of dogs: Ed came into her life in March 2007, a month after she lost her second son at age 8 to a rare form of liver cancer.
“Ed literally saved my life,” Natalie says, noting that Ed shares a birthday with that same son, named Yonadav. “I spent every minute socializing him until he was exhausted. I exposed him to everything I possibly could. He’s a very special dog, for many reasons.”
Realizing how important her sons’ pets had been to them during their illnesses, and to her four surviving children, Natalie decided she wanted to work with kids who were grieving or in crisis. “My kids enjoyed their lives to the last nanosecond. I feel it’s my duty to carry on for them,” she says. “I want to say to these kids, don’t you dare give up, you have been given the gift of life. I have a responsibility to do this.”
So she founded the touchingly named Brothers in Arms, in honor of her two boys. And the centerpiece of her program is big, loveable, unflappable Ed. 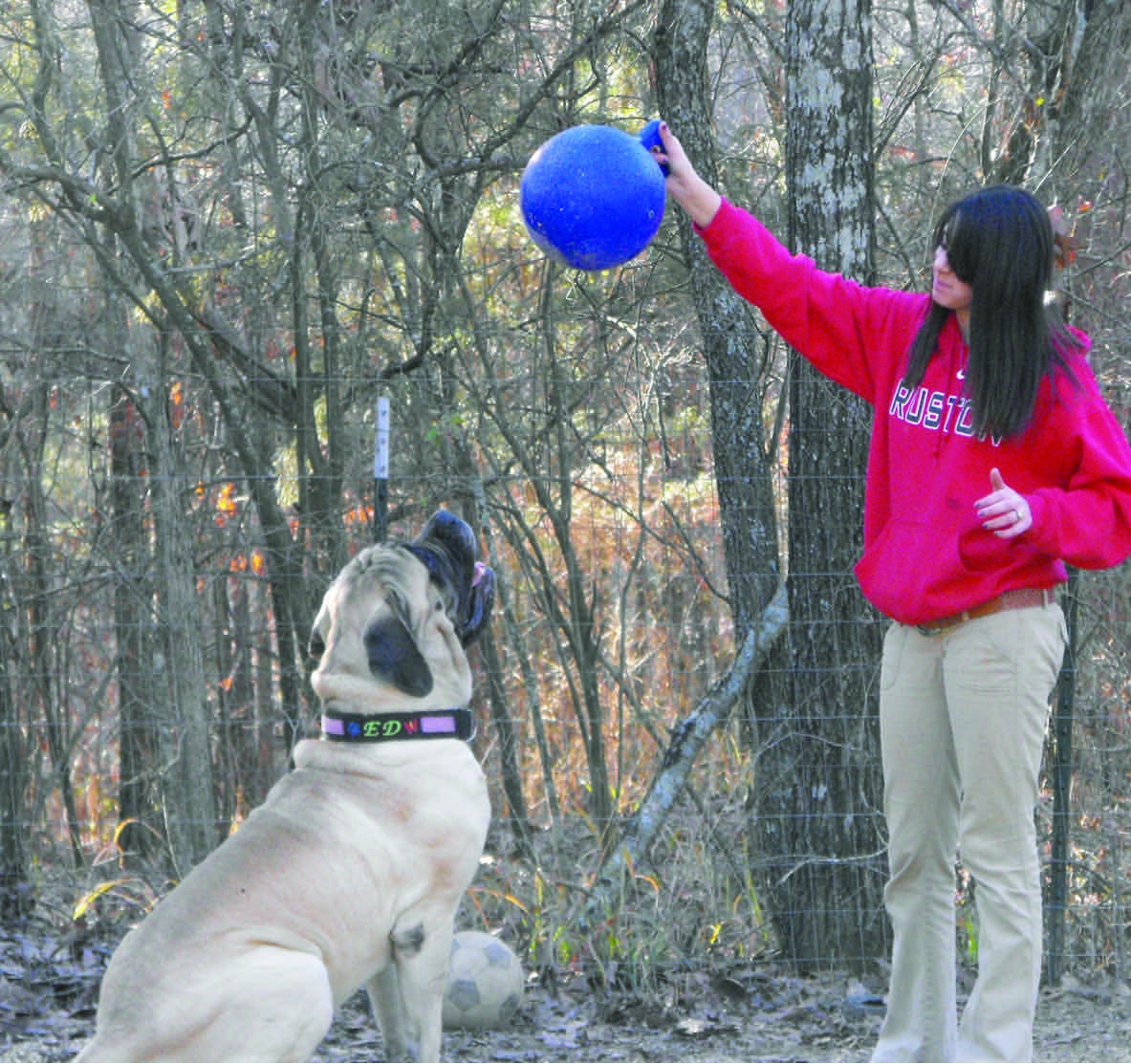 Ed with Natalie’s daughter, Moriah, and their favorite pastime.
The handsome fawn Mastiff had 11 points toward his championship when Natalie told her handler she was going to pull him from the road to begin his training in earnest. They became certified as a Pet Partner Team by the Delta Society. In the summer of 2008, she and Ed participated in an intensive four-day training program sponsored by the FEMA-certified National Animal Assisted Crisis Response Organization. Ed handled the mock fires, blaring sirens and simulated shelter environments in his usual unruffled style, and he was soon certified as a canine first-responder, only the second Mastiff in the country to have that honor.
School classrooms are usually not considered on par with plane crashes or disaster sites, but Natalie notes that many of the 500 kindergarteners through fifth-graders at Ruston Elementary School, where she and Ed visit, come from domestic war zones. Gang violence and abuse at the hands of family members have whittled down their self-esteem. 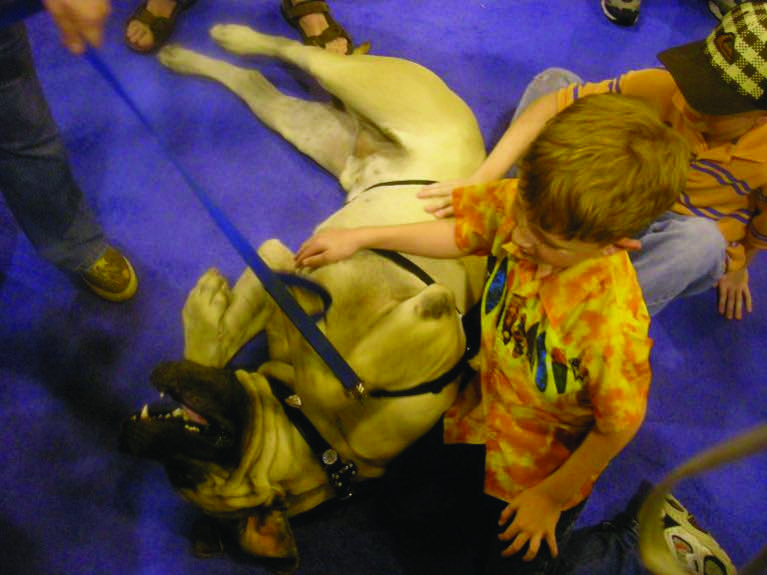 Ed enjoying himself at the Meet the Breeds event at the Reliant dog show series in Houston in July 2008.
On a visit she and Ed made to 50 kindergarten-aged students, Natalie brought two bags: One contained human “necessities,” such as a blanket or toothbrush. The other held Ed’s basics.
Natalie began a narrative that was punctuated with objects pulled from the first bag. “It was heartbreaking to see how many of the children could not explain the rationale for a soft blanket or a toothbrush,” she says.
But when the story line turned to Ed, and children began pulling items out of the “Ed” bag – food, treats, a blankie, a soft toy – a lightbulb went on, Natalie says: “The connection between taking care of oneself and one’s need for comfort translated over to Ed and his need to be a healthy, well-adjusted member of society.”
When Ed first entered the classroom in September of last year, the children were so terrified of him Natalie had to keep him confined in his crate. But within weeks, they were waiting with anticipation as he went from desk to desk, ruffling papers with his nose in a thorough “homework check,” or took turns “teaching” him to sit.
In these children’s world, dog fighting is simply a part of daily life. With her group of teenage boys, Natalie challenged their opinion of the status quo by inquiring blithely when and where the next fights would be.
“‘I’ll be there with Ed, and I’ll put Ed in and see how he does,’” she told the boys, who were mortified at the thought that the big, gentle dog who let them hug him and whisper secrets in his ear would be mauled by the neighborhood pit bulls. “And so I asked them, ‘Why is it OK to do it to your dogs?’” 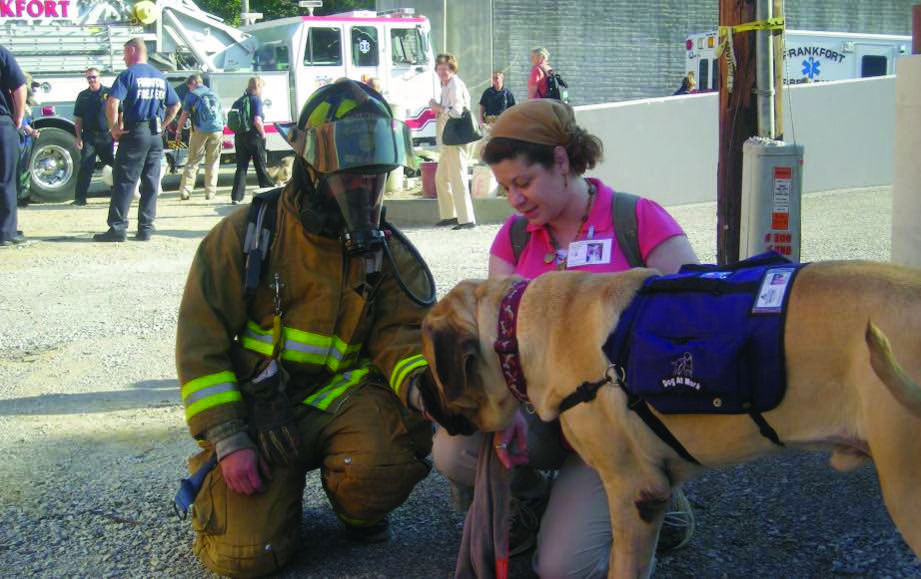 Ed at National Animal Assisted Crisis Response training in Kentucky in 2008.
Natalie estimates that she spends about 80 percent of her time trying to teach the students how to express anger in a way that society finds acceptable. In one exercise, each created a collage that illustrated the word “Violence,” using photographs cut out of magazines. When it came time to create a collage for the opposite word, “Peace,” each collage had a photo of Ed.
Part of the “Brothers in Arms” mission is to promote the “good nature and grandeur” of the English Mastiff, and to educate the public on the breed. Ed’s student delighted in knowing just what kind of dog Ed is: “This is an English Mastiff, not just any mastiff, and they come in three colors,” they tell other students, proud of their new-found knowledge.
By the end of April, before graduation, Natalie noticed the students were starting to be kinder toward each other. “Unconsciously,” she says, “they were taking values they were applying toward Ed and applied them to each other.”
None of the children’s family members showed up for the special graduation program that Natalie planned, but she hurriedly filled the seats with school faculty, students from other grades, and her husband Erez, a professor of engineering and researcher at Louisiana Tech University.
“A friend of mine who’s a wonderful quilter and who has Mastiffs made a lap quilt for each child,” Natalie remembers. “It had paw prints, and the Brothers in Arms logo.” Each youth also received an album filled with photos taken of themselves and Ed throughout the program that year, decorated with inspiring quotes and a pair of dog tags. One side had a laser-engraved photo of Ed. The other side had three words – courage, strength and humility – virtues Natalie had woven into her program and Ed had helped them learn.
The school and the city gave Natalie and Ed a KEYS award, short for “Keep Educating Youth To Succeed.” The Mastiff Club of America awarded them its 2009 service award, at the Specialty in North Carolina.  Ed and Natalie were nominated for the American Kennel Club’s prestigious ACE Award for 2009. At press time, Natalie was still waiting to learn if the school has been given an education grant to fund her work. If it is, she and Ed will be hired by the school board as full-time employees.
But perhaps her greatest reward has been the tears sparkling in the eyes of Ed’s first graduating class, asking if he can follow them to sixth grade.
“He’s like a glove,” says Natalie of her canine partner. “He fits perfectly.”

For the moment, Brothers in Arms is a one-dog show: While Natalie’s almost 4-year-old brindle bitch Lucy has pinch-hit on occasion, Ed shows the most aptitude for the work, which is very stressful, even for the most well-adjusted canine.
“After 45 minutes of intense dealings with these kids, he’s snoring,” Natalie explains. “He has to behave and maintain his attention, and sometimes it gets very emotional, as a child might grab him and start crying and yelling – whatever they had to do to get their emotions out.”
Natalie’s youngest puppy, 5-month-old Bumble, will be trained for this work as well, and it’s her hope that some puppies from her upcoming first litter will continue on as therapy dogs, a role she sees tailor-made for the majestic, magnanimous Mastiff.
“Mastiffs generally do not tend to be over-reactive dogs. When a fight breaks out in a classroom, a child has a meltdown, or needs to be physically removed, Ed will alert and go stand near the youth or children. This is the way of our breed,” she says. “They will place themselves between that which they see as the one who needs protecting and the instigator. This is their demeanor.”
Natalie would also like to see Brothers In Arms expand to other breeds – specifically, Molossers.
“I feel very strongly about using Molosser breeds. Many of them used to be war dogs, and they’re not anymore,” she says. “These children’s lives are so full of chaos, so very warlike. And I tell them, ‘In Ed’s family tree there were war dogs long ago. They made the transition. There’s no reason why you can’t walk away from this, too.’”
© Modern Molosser Magazine. This article may not be reposted, reprinted, rewritten, excerpted or otherwise duplicated in any medium without the express written permission of the publisher.
Sun, 04/04/2010 - 9:48am