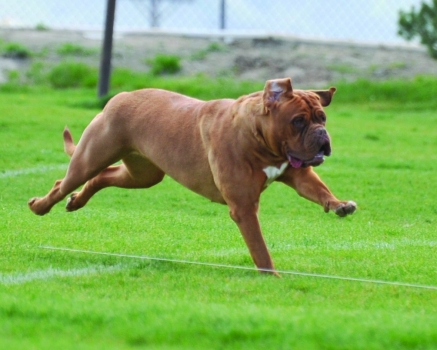 Proof of her breed's athleticism, this Dogue de Bordeaux tries her paw at the fast-paced Sighthound sport of lure coursing.

The, ahem, lure of the athletic Dogue de Bordeaux
By
Gale Bandsma

To those unfamiliar with the breed, the Dogue de Bordeaux may seem a mystery – why a Working dog? For lack of a better choice in classification, they may assume, the “mastiffy” Dogue was assigned to the Working Group by default.

This couldn’t be further from the truth.

The exact origins of the breed will probably always remain a subject of discussion and debate. But all the theories describe a working dog used over the centuries in a variety of tasks, including guarding homesteads, baiting bears, herding livestock, pulling carts or hunting down game. Today, this long history of working ability is confirmed daily by the Dogues who successfully compete in rally, agility, obedience, weight pulling, carting and other performance events.

I would not have known of the Dogue’s athletic potential without those who participate in these events and their enthusiasm in sharing their experience and knowledge. Seeing a Dogue run an agility course impressed me with its working ability. When I got my first Dogue, I considered it the “perfect” little-old-lady dog – very loyal, but not extremely active. But all my Dogues have proven that they are athletes: They have the desire and ability, and are willing to try just about anything I challenge them with. In recognition of the breed’s working nature, the Dogue de Bordeaux Society of America has a working-dog program that recognizes those Dogues that compete in events other than conformation, such as obedience, rally and agility.

My kennel club has “open” lure-coursing practices in the summer for Sighthounds and any other breeds or mixes that want to come out for some exercise. I thought, “What the heck?” and was pleasantly surprised. My Dogues (aka “wrinkled Sighthounds”) stunned everyone with their intensity and what I call “ground pounding.” What Dogues de Bordeaux don’t have in the grace of a Sighthound’s double-suspension gallop they make up for in focus.

In lure-coursing, dogs follow a "lure," usually a white plastic garbage bag, around a defined course.

That said, lure-coursing with a Dogue (or any mastiff-type breed) is quite different than how a Sighthound owner would prepare his or her hound. While Sighthound puppies are exposed to the lure early and start running short sprints while young pups, I would not recommend anyone consider practicing their Bordeaux until it is at least a year old. Dogues are also brachycephalic (a fancy term for “smushy nosed”), which means they don’t have the long muzzle of a Sighthound for cooling. Like any athlete, the Dogue needs to be in good physical condition, well hydrated and “warmed” up. So, before deciding to take on a coursing test, you must take into account the temperature and condition of the dog. Don’t think you can take out your “couch potato” and run the course. Even a Dogue who has done practice runs should be warmed up with brief running sessions prior to a run.

Needless to say, I was excited when earlier this year, the AKC announced the Coursing Ability Test as a new performance event. CAT events are very relaxed – blue jeans, a hat and comfortable shoes. A slip lead, suntan lotion, plenty of water, a cooling coat or fan, and a crate are the basic equipment needs. The club will have a “roll call”: Each dog is inspected to be sure it is sound and not lame, and bitches are not in season. Then it’s “Tally-ho!” from the hunt master, and the chase begins.

The Coursing Ability Test is a modification of lure-coursing, a simulated rabbit hunt for Sighthounds that uses a plastic bag on a pulley system as the prey, or “lure.” To compete, dogs must be at least 12 months old and registered as with AKC, FSS or Canine Partners. It is pass or fail: The dog must complete the course by himself with enthusiasm and without interruption. Lure-coursing is a sport created for Sighthounds, like these Greyhounds (above), to simulate a rabbit hunt. Today, all breeds can try a modified version of this sport with the CAT, or Coursing Ability Test (below). In regular lure-coursing trials, Sighthounds run in groups of up to three, following a course that ranges from 600 to 1,000 yards long, and are not timed, but rather numerically scored on agility, speed, follow, enthusiasm and overall ability. The CAT test, by contrast, comprises a 600-yard course for dogs over 12 inches, which they must complete in less than two minutes without interruption; smaller dogs – and flat-faced breeds, such as the Dogue de Bordeaux and Bullmastiff – run a 300-yard course, which they must complete in less than 1½ minutes. To earn a CA title, your dog must past three tests under at least two different judges. At 10 passes, he earns the CAA (Coursing Ability Advanced) title. The sky is the limit after that!

As in the early days of the Dogue de Bordeaux’s AKC recognition, you will find that you and your Dogue will occasion stares and curiosity at the event. Some participants have never seen a Dogue or think it is a “canine partner” (mixed breed), so you should be willing to introduce your Dogue and explain the breed. You may also have to explain why your “large” Dogue runs the shorter of the two distances, which may give your fellow test-takers the idea that the Dogue de Bordeaux is not “competitive.”

My Dogue’s first test was at the Pocatello Kennel Club in Idaho. It was an amazing turn-out of more than 100 runs. After her first run, “Izzy” (GCh. Rising Star’s Izmos), was noticed and her performance was commented on by the sponsoring coursing clubs. The hunt master described her as “a large and lovely Dogue de Bordeaux who showed us that brachycephalic should never be misconstrued as ‘shortened nose, shortened interest.’” Other dog owners were surprised at her coursing, and I was so pleased she performed so well. 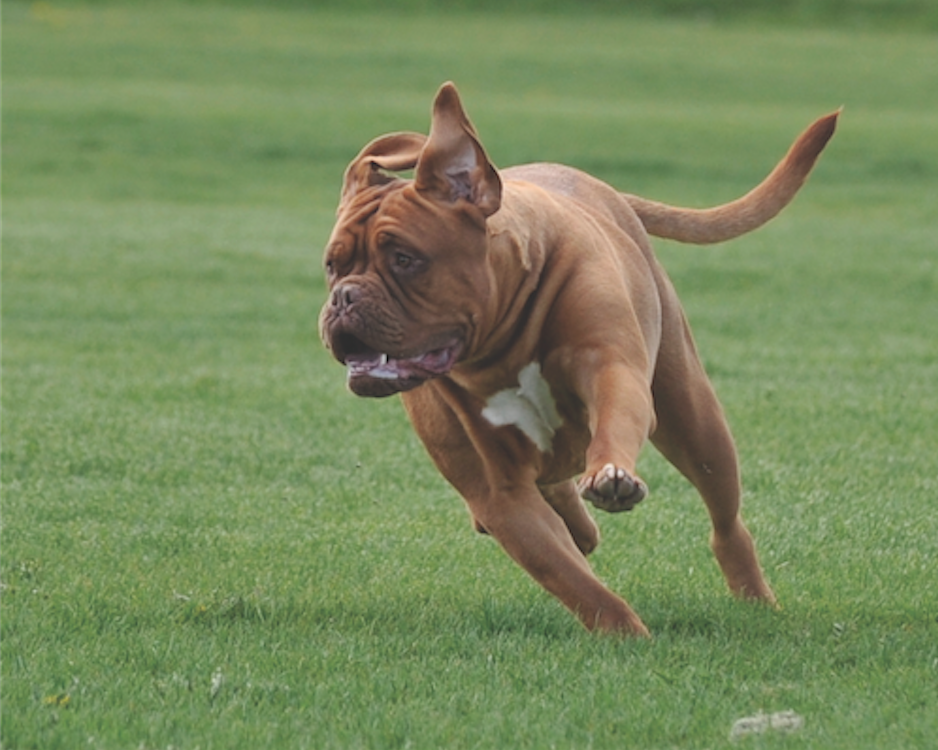 “Izzy” (GCh. Rising Star’s Izmos) proves that shortened nose doesn't mean shortened interest on the field.
At the Rocky Mountain Borzoi Club test in Colorado in late May, Izzy finished her third successful run. Three orange ribbons in hand, she had earned her Coursing Ability (CA) title – the first Dogue de Bordeaux to do so. Because at the time the event was so new, the picture was taken without the usual signboard indicating “new title holder.” But the gorgeous background of Pikes Peak more than made up for that.
Photos by Randy Gaines.
© Modern Molosser Magazine. This article may not be reposted, reprinted, rewritten, excerpted or otherwise duplicated in any medium without the express written permission of the publisher.
Sat, 02/04/2017 - 4:12pm