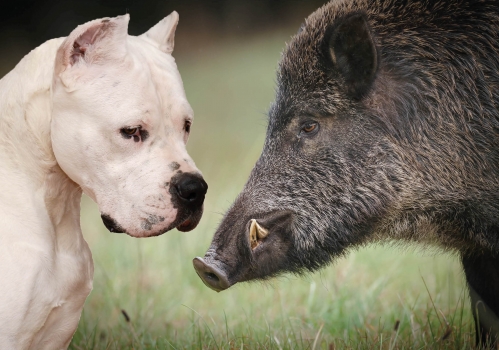 In this day and age, there are many jobs that working-dog owners can chose to do with their dogs. But will those jobs completely fulfill a dog purposely built to physically subdue violent and destructive predators?

In the case of the Dogo Argentino, the answer is likely not – unless, of course, the job is to rid land of destructive feral hogs.

Wild boar, the primary prey for the Dogo Argentino, have long teeth that form tusks. As the hogs mature, these teeth grow and sharpen to the point where they are like daggers sticking out of the hog’s mouth. Many of these hogs are very crafty in their attack, and can slice a dog very badly depending on where the dog holds them.

Hunting scars are not just those inflicted by the wounds of a worthy adversary. They may also come by way of fencing, underbrush, gear and occasionally a misguided bite from another pack member. 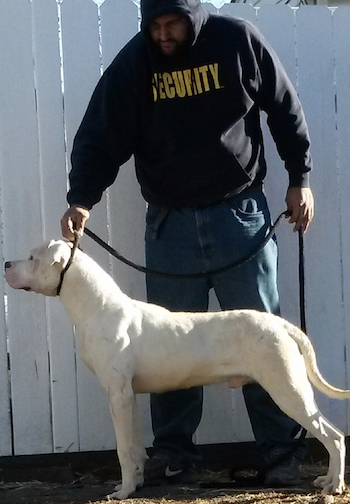 Honorable scars on a Dogo Argentino are often found on the legs and face.

In an effort to keep the Dogo Argentino useful, we must not shy away those whose skin is a roadmap of their lifestyle. With American Kennel Club recognition just around the corner for the Dogo Argentino (the breed enters the Working Group on January 1, 2020), it is important that exhibitors, judges, breeders and hunters all treat a field-tested Dogo that has the scars to prove it equally to a clean, show-prepped example.

The heaviest burden will lie on the hunting community, which needs to bring these tested and proven Dogos out to show and confirm that this is normal. The next to bear the weight of this task will be the judges. If they do not put some of their typical expectations of show conditions aside, they may cast away the best example of the breed and in turn set a precedent of overlooking real working dogs.

And those working dogs are our bedrock. In the United States, I believe owners of this majestic breed really embrace its origins and history by supporting breeders and groups that promote the working Dogo Argentino. The breeding efforts of many of today’s kennels are still based on the principles set forth by the breed’s creator, which were included the ability to rid farms from the destruction of crops by wild boar. Though there are many Dogo Argentinos that will never see a wild boar due to their location or their owners’ beliefs, just as many – and maybe more – will engage a wild boar in their lifetime. 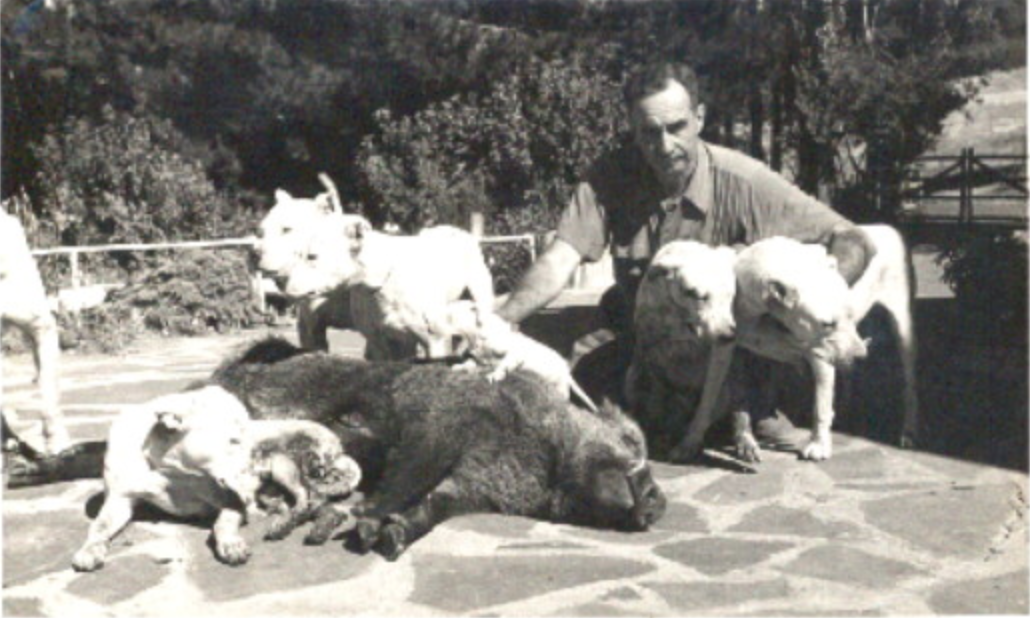 Breed founder Antonio Norez Martinez's brother, Augustin, with some of Dogos and their quarry, 1962.

Today's Dogo Argentino in the United States has a much lower risk of these injuries compared to the Dogo Argentino of past generations in Argentina. This difference lies mainly in the use of technology afforded by modern hunters compared to the minimalist approach of a rancher protecting his own crops. Though they are both using the Dogo’s innate abilities to protect the lands, modern hunters who do not rely on these dogs to protect their own crop often use ATVs and GPS collars. 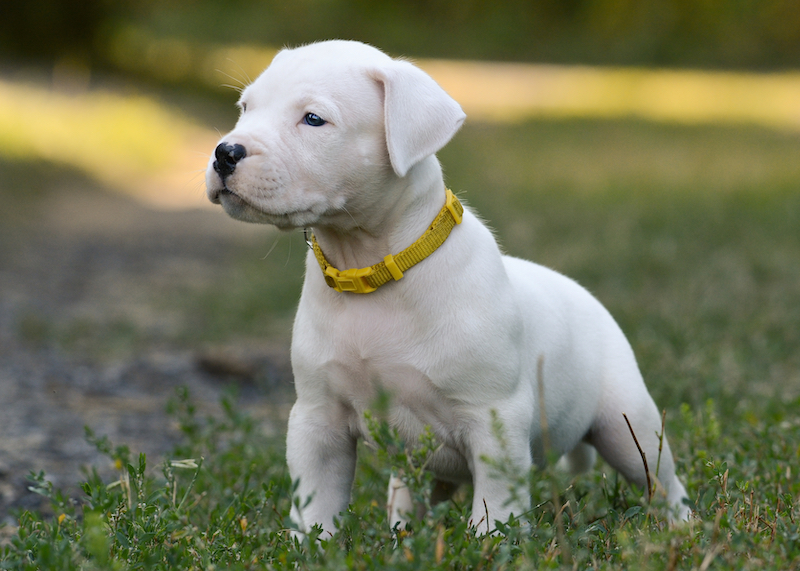 What lies ahead? Show dog or a boar hunter? Why not both, the author asks.

Many modern hunters also use protective “cut gear,” designed to protect the vital areas of these dogs and often made of ballistic materials such as Kevlar. At minimum you will typically see a cut collar that offers the most freedom of movement and covers the jugular vein. The most common places that you will see working scars are the forelegs and the face, due to the Dogo’s tendency to attack head on and an inability to offer a reasonable balance between movement and protection.

A word on ears: My friend Lucas Granja of Alta Gracia Cordoba Argentina (Criadero del Tajamar) grew up in the Argentine countryside, where they would either walk and at times run with the pack or follow along on horseback. From his accounts, the Dogos would hunt alongside of dogs that had other jobs on the farm, such as herding and guarding. He notes that typically the function of the ear crop was to avoid injury from the sharp, dense underbrush and trees (espinillos, piquillin, chañar, churqui, carqueja and poleo ) and less for the damage inflicted by the quarry. This makes a lot of sense since we have many natural-eared Dogos in our breeding program who hunt and have never had serious ear injuries. 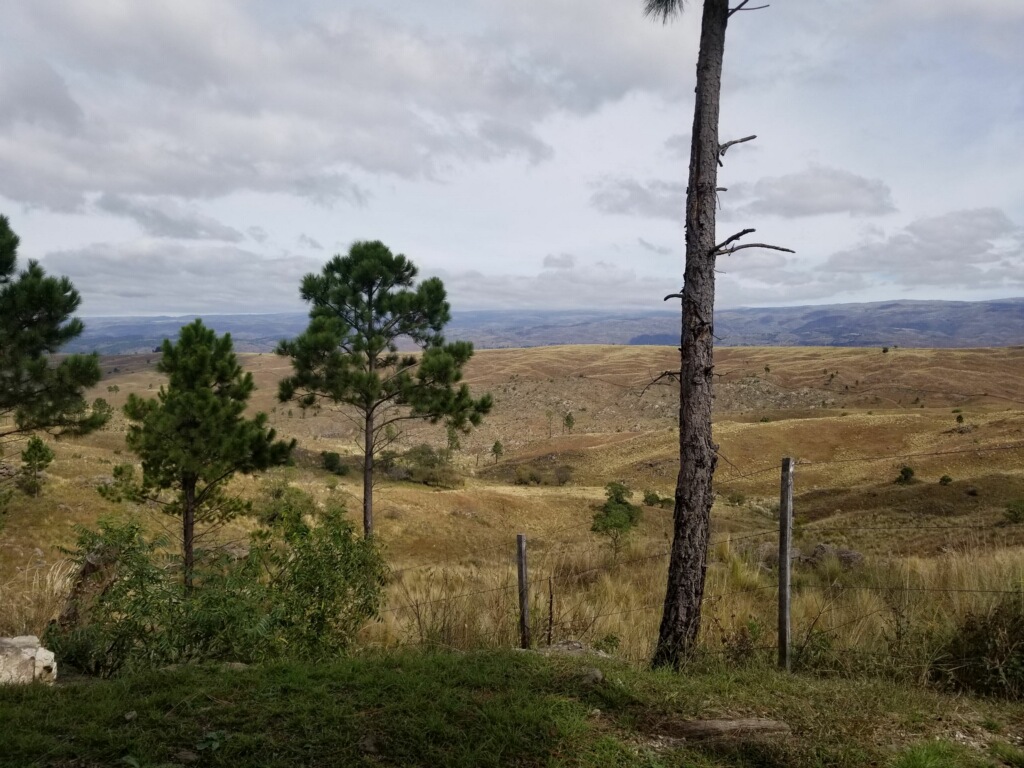 Vista of the Argentine countryside.

Another thing to avoid faulting is broken teeth. When the Dogo has hold of a bony prominence such as the face or skull of a hog, the struggle may culminate in a broken or lost canine. It is inevitable, for a Dogo Argentino with the correct temperament that attacks head on, to break a tooth over years of hunting wild boar. In all dogs, the canine teeth are the most likely to suffer a fracture, so it only makes sense that in a breed used to hold down large, dangerous prey, these teeth are at a higher risk of injury. 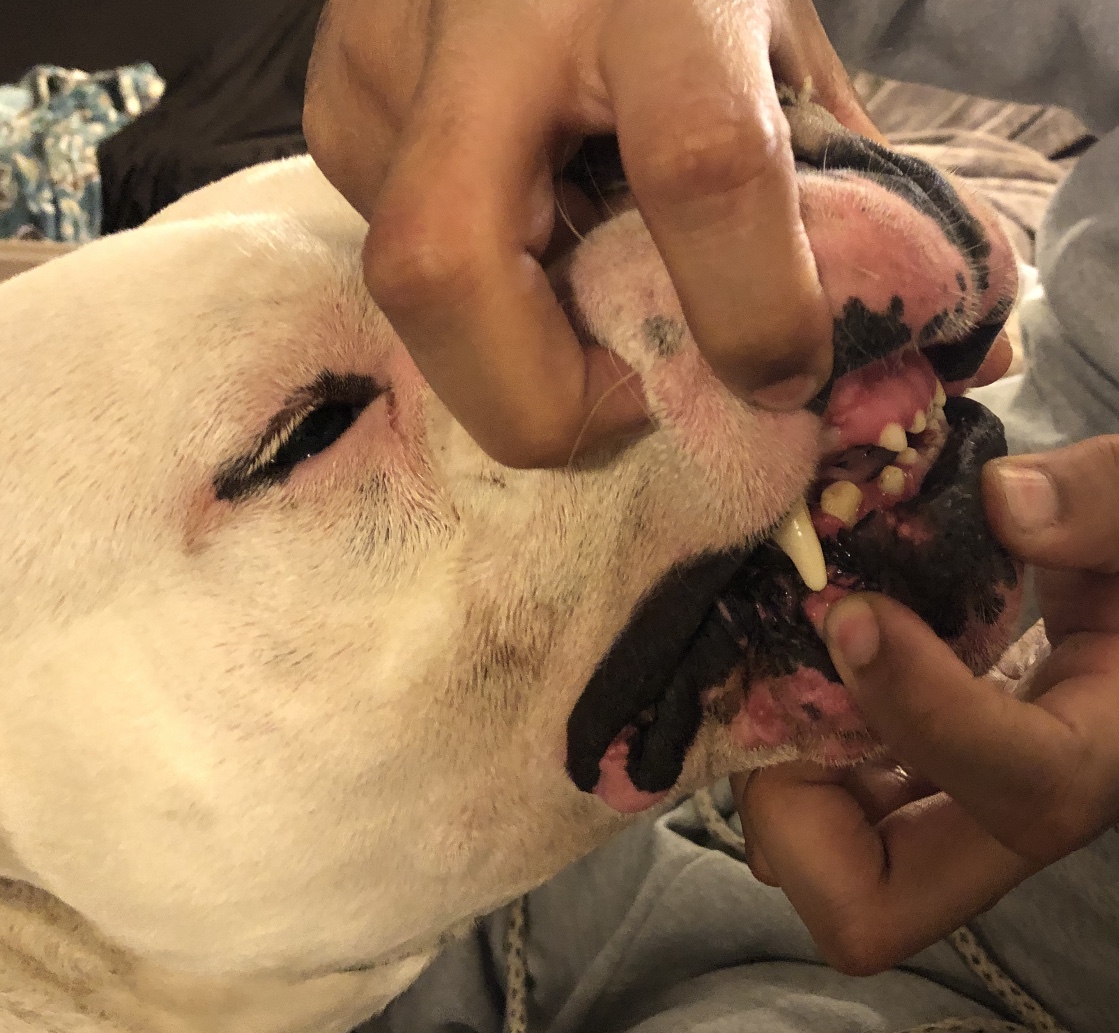 I never really understood the need to have a caveat regarding “honorable scars” on any dog, because just as with us humans, blemishes happen. But if there was any doubt about the acceptability of working scars on our breed, I hope this article has laid it to rest. 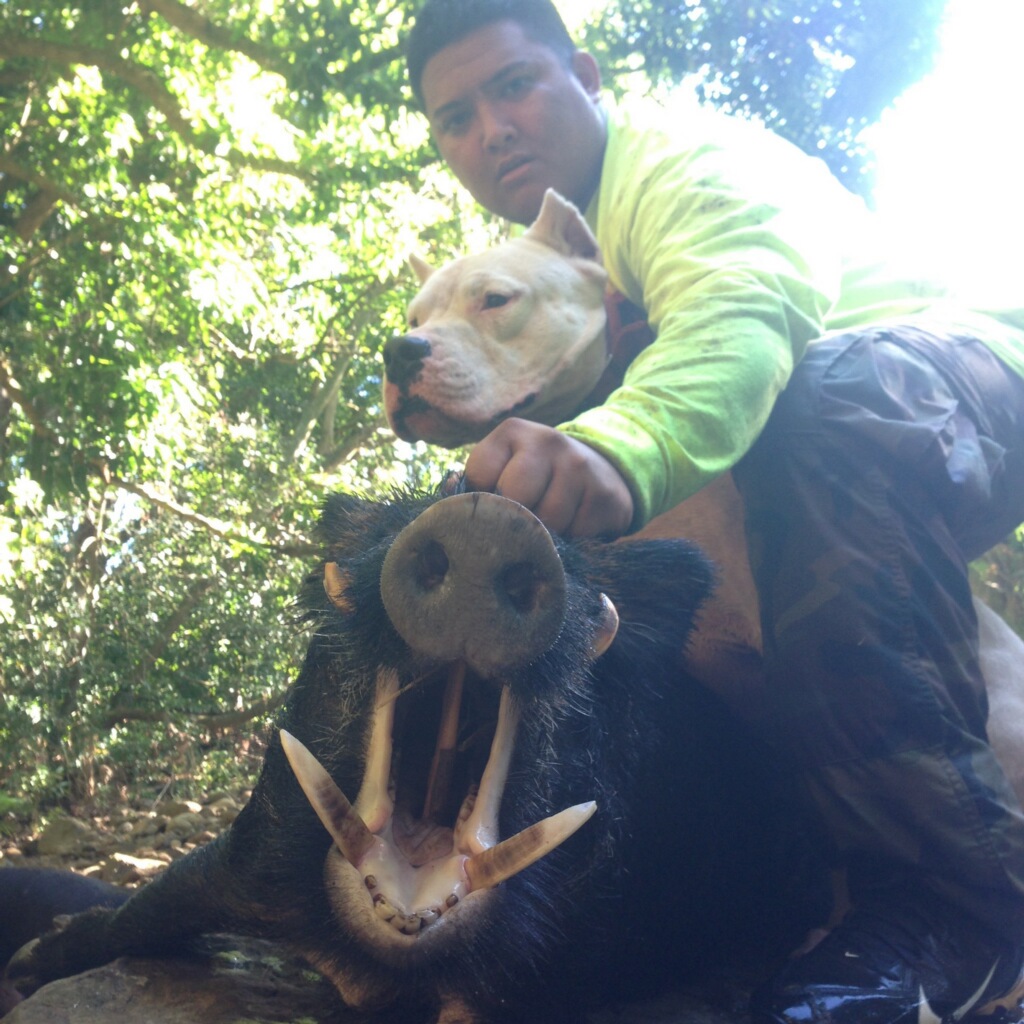 The business end of a wild boar.

The show Dogo and the hunting Dogo must be the same specimen, and I think thus far, with a few exceptions, the breed has not been separated into two different dogs, one for the bench and one for the field. This may be the single most important reason for hunting scars to be accepted, because if we shy away the functional dogs from being shown, this separation, which has happened in so many other breeds, will soon follow.

The Dogo Argentino is a beauty like no other, a rugged and rustic beast, while at the same time a finely tuned machine built for the pursuit of dangerous prey, with no part of its entirety standing out from another. The diary of each dog is etched in the rips of their cut gear or the scars on their hide, telling a story of just how well those attributes fit together.

© Modern Molosser Magazine. This article may not be reposted, reprinted, rewritten, excerpted or otherwise duplicated in any medium without the express written permission of the publisher.
Tue, 04/23/2019 - 8:50pm