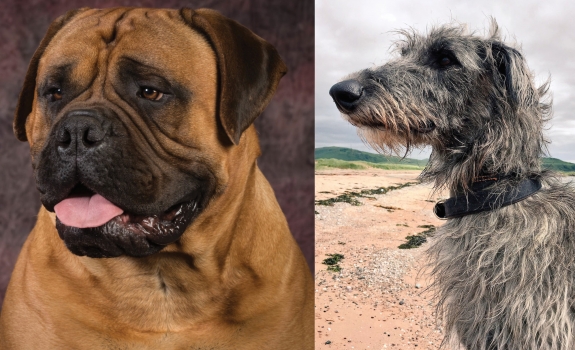 Cheating on Your Molosser

True confession from a Bullmastiff fancier who took on a creature from a planet far, far away
By
Billy Brittle
Up until now, Molosser breeds have been all I have known.
For 35 years, I have owned, shown and judged Bullmastiffs, and have been very fortunate to be closely connected during that time with the Oldwell Kennels, the most successful Bullmastiff kennel of all time. My only foray into other breeds was as a founding member and first chairman of the Neapolitan Mastiff Club of Great Britain and a founding member of the UK Dogue de Bordeaux Club.
So why would I want to make the transition to a completely new breed and one that outwardly has no significant connection to the one I am so used to and comfortable with?
A Scottish Deerhound, no less? Author Billy Brittle with two birds of a very different feather.
Well, for that the blame ... or credit ... lies with my wife. For more than 30 years she has accommodated my love of Bullmastiffs and adopted one puppy after another without any fuss, loving each one without reservation. However, for her 50th birthday, she informed me that she would like to pick our next breed of dog, and I could not really argue. I foolishly assumed that she would go for a Frenchie or a Bulldog, which other Bullmastiff owners seem to favor. But, no, she announced it had to be a Deerhound. Her father had been a long-time owner of racing Greyhounds and her childhood had consisted of a stream of retired dogs, and she had always had a love of the Sighthound type of dog.
Looking back, I can see that there was a huge amount of fate involved here, as for the previous three years I had built a good relationship and friendship with Hector Heathcote and his partner Sue Finnet in their capacity as vets running the UK Clone franchise, which we had used very successfully to impregnate a number of Bullmastiff bitches with frozen semen imported from the U.S. Quite coincidentally, Hector and Sue are also the owners of the Hyndesight Deerhound kennel, one of the most successful in the U.K. Having been to Hector and Sue's premises a number of times, I had developed a fascination and curiosity for this elegant and ethereal breed. So the prospect of owning one was very exciting, and my wife was delighted when Hector and Sue agreed to let us have a dog pup.
My expectation was: Pick a pup, bring him home at eight weeks, and make my wife very happy. However, this was when I began to realize that a Deerhound is not a Bullmastiff: Hector put the block to our expectations by telling us that we could not take the pup until 11 or 12 weeks. As I was quite used to letting robust, fat and advanced Bullmastiff pups go at eight weeks, I thought that Hector and Sue's caution was perhaps a trifle over the top.
It was not until I saw the litter at nine weeks that I realized how accurate Hector was, and how far behind a typical Bullmastiff litter of the same age they were -- all legs, fragile and certainly not as boisterous as Bullmastiff pups of the same age. There was no way that an 8-week-old Deerhound pup would be ready to leave its mother or the litter. My initial reaction was to be reminded of Bambi attempting to walk on ice, and we realized that this was a whole new ballgame to what we were used to.   Eventually, Moth, as we called him, came home, and the real differences kicked in.
I think that a lot bull-breed owners tend to think that their breed is at a higher level of canine intelligence than the typical hound, and I must shamefully admit that I was one of those. How wrong I was: Moth was clean within a week, able to open the door leading to the garden within three, and ruler of the house instantly. This was a revelation. The nice but dim dog I was prepared for was suddenly running rings around us all.

Baby puppy walk – one of these is not like the others!

Once again, having had a breed that could top 150 pounds I thought I knew everything regarding managed growth and careful rearing. Wrong again! Suddenly I had a dog that seemed to grow an inch each day and absolutely defied all reasonable logic with the speed of his growth. Hector did warn me, but one again I thought what would apply to a Bullmastiff would also apply to a Deerhound. I now know better.
The immediate physical differences are pretty apparent, and the lack of drool and the continuous molt that are a fact of life with the Bullmastiff was and is very welcome. The huge bursts of energy followed by a comatose sleep are also very different from Bullmastiffs, who seem to pretty much match their owners' sleeping pattern. As for pain threshold, I was scared witless the first time I trod on Moth's tail and was convinced his scream of anguish was the result of a severe break at the least, only to find that five minutes later that he had returned to complete normality, apart from a very accusing glare. Compare this to Bullmastiffs, whose pain threshold is so high that on occasion they can be severely sick or injured without you even knowing.
Mentally, there are a lot of similarities: a real affection for their owners and a real interest in everything that is going on around them. Obviously, with the old fighting Bulldog heritage of the Bullmastiff you do have to be careful around other dogs, especially the males. This fortunately is not a worry with the Deerhound, but nevertheless their sheer size does surprisingly attract a lot of apprehension from the ignorant, which I find really annoying.
Quite clearly, the Deerhound is the pickpocket of the canine world. Papers, money, you name it, if it is not nailed down then he will take it. Food of any description is fair game and in his world belongs to him. No matter where you put it he seems to find a way to get at it, and at the risk of offending every Sighthound breed this seems to be a characteristic that is shared. Perhaps I should not be surprised, as a certain incident with one of my father-in-law's Greyhounds and the cooked Christmas turkey springs to mind. A Bullmastiff, on the other hand, is very law abiding and would not dream of committing such an offense.
The show scene in the U.K. is such that throughout the year Bullmastiffs and Deerhounds are almost always exhibited on different days, so there is little or no interaction between owners and dogs. Making the effort to attend some shows, I was struck with the difference in the way each set of owners acts and even dresses.
Bullmastiff owners and exhibitors are very casual in their manner and dress, but obviously are aware of their dogs' potential dislike of other dogs and so are very careful in keeping their dogs under control. Compare that to the typical Deerhound exhibitor, who seems to dress specifically for long walks in a gale-force storm, and to the collective "heap" of dogs that pile up outside the ring with no apparent risk of any altercation and whom seem to accept each other with total good grace.   I think in the scheme of things the Deerhound is far more likely to take a Group or Best in Show than a Bullmastiff, as I think there is a perception that Bull breed owners along with their dogs are a bit "rough," whereas the Deerhound and its owners are a little bit more genteel. So perhaps the British obsession with the class system extends to dogs!
One of the most remarkable things for me is the relative physical stability of the Deerhound breed compared to a Bullmastiff. The pictures below show the difference the Bullmastiff has undergone since recognition in 1924, almost a totally new breed. Compare that to a winning Deerhound of the same era and a recent winner, almost no change at all. This is something very refreshing, as I am getting fed up seeing Bullmastiffs win that are a considerable distance from the original breed standard. Clearly there is not an appetite to continuously change the appearance of the Deerhound as there appears to be in many other breeds. Ch. Hyndsight Riddick, whelped more than a century later, in 2009.

Remarkably for me, there is something intangible that is very similar and shared between these two distinct breeds. The honesty, loyalty and sheer love of life of both breeds is apparent, and the nobility of spirit identical. Although they are two outwardly different breeds, there is a definite shared honesty that is a pleasure to be part of.
Will I always own a Deerhound? The answer must be a resounding yes.
Will I always own a Bullmastiff? Of course.
© Modern Molosser Magazine. This article may not be reposted, reprinted, rewritten, excerpted or otherwise duplicated in any medium without the express written permission of the publisher.
Fri, 08/07/2015 - 6:35am