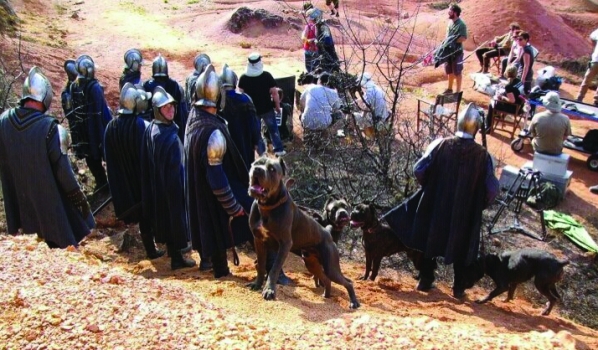 Renaissance Rome wasn’t all art and architecture: As Michelangelo was painting the Sistine Chapel, power-mad popes plotted wars, courtesans helped spread a plague of syphilis, and the gunpowder revolution turned killing into a wholesale sport.

In short, it was a time of great brutality as well as great beauty. And so it is fitting, perhaps, that a pop-culture portrayal of that 15th Century papal state would include the Cane Corso, a breed that itself straddles the line between serious and stunning.

Corso fans were thrilled to see their breed in the season premiere of the second season of “The Borgias,” the Showtime series that follows the fortunes of the eponymous family whose corrupt reign encompasses virtually every mortal sin, and then some. The episode, which aired in early April, showed a pack of war dogs accompanying Roman soldiers on a manhunt, eventually cornering their human prey in a sinewy show of power and ferocity.

Hungarian animal handler Árpád Halász, who procured and trained the Corsos for the cable-network series, says the breed was selected for the scene because it was period appropriate.

“In paintings, drawings, stonework and descriptions, we found dogs who looked like a Cane Corso,” he explains. The breed’s intimidating appearance was perfect for the role, which called for a canine brave and brawny enough to ride shotgun with mercenaries and papal forces.

Filmed in Budapest, Hungary, the show used six Cane Corsos plus one understudy – all of them formentini (dilute grays), but for one black and a dark brindle, though Halász notes the dogs’ working ability was more important than their color. And while the crop-eared crew might look historically correct accompanying chain-mailed soldiers, getting 21th Century dogs to perform like their Renaissance forebears took a bit of work.

“These dogs had to chase people, weren’t allowed to bite each other,” and they had to look imposing, Halász explains. “The dogs had to run a lot, and in the last scene they had to bark at the actor without harming him.”

Halász obtained the dogs from Hungarian breeder László Schindler of Kratosz Kennel, who competes in high-level obedience trials. Though they all came from the same bloodline, the dogs grew up with different owners, so the first step was getting them acquainted and comfortable with each other. Once they could run and work together as a well-behaved pack, Halász began training them to bark and act aggressively on command. The set provided its own challenges. The scenes were shot in a stone quarry, “on rough ground, where the weather was very hot and there was almost no shadow,” Halász says. “The dogs had to run up and down a hill continuously for a very long time.” To help them cope with the heat, the dogs were watered, cooled and rested frequently.

Having trained several hundred dogs for work in films and advertisements in the course of 25 years, Halász has worked with many breeds, including Corsos. The chase scene in “The Borgias” was “the first time that we could show the abilities of this breed,” he says, from their responsiveness to commands to their athleticism.

Because of the dogs’ intensity and their appearance, “at first, everyone was a little bit afraid of them,” Halász admits. But the trepidation of the actors and crew soon dissipated once they realized the dogs were aggressive only for the script, and not in real life. Indeed, by the time the final sequence was being filmed, and the dogs were chasing the actor up a hill and barking at him fiercely, onlookers were chuckling at the hotdog pieces that were being flung at them as their reward.

As any actor will tell you, shooting on a set all day is hard work, and that goes for alpha dogs as well as leading men. “The dogs were tougher than we thought,” Halász concludes, adding that as a trainer he was struck by the tenacity of the breed. “It wasn’t an accident that back then people used this type of dog for that kind of work.”

© Modern Molosser Magazine. This article may not be reposted, reprinted, rewritten, excerpted or otherwise duplicated in any medium without the express written permission of the publisher.
Thu, 11/19/2015 - 12:41am