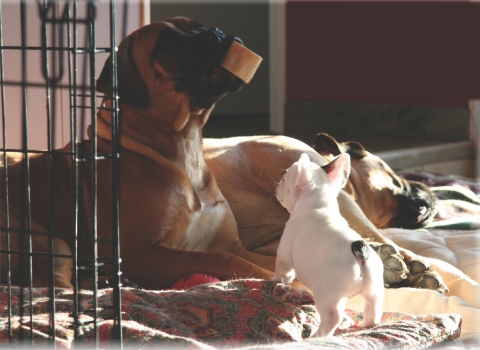 The French Bulldog is the Bullmastiff's bowling-ball-shaped shadow
By
Denise Flaim
When it comes to classic pairings, there’s love and marriage …  peanut butter and jelly … salt and pepper.
Dare we add … Bullmastiffs and Frenchies?
Anywhere there is a confluence of Bullmastiffs, it is almost inevitable that in tow will be one, if not two or three or (potato-chip alert!) more French Bulldogs. Pint-sized Molossers in their own right, Frenchies seem to be the mini-me of choice for Bullmastiff owners, who are drawn to their squishy faces, compact proportions and overall Bulliness. Last year’s Bullmastiff National saw an informal “added class” at the end of Sweeps judging, when breeder-judge Vince Grlovich was presented with a bevy of mostly French Bulldogs, all with money tucked under their collars. 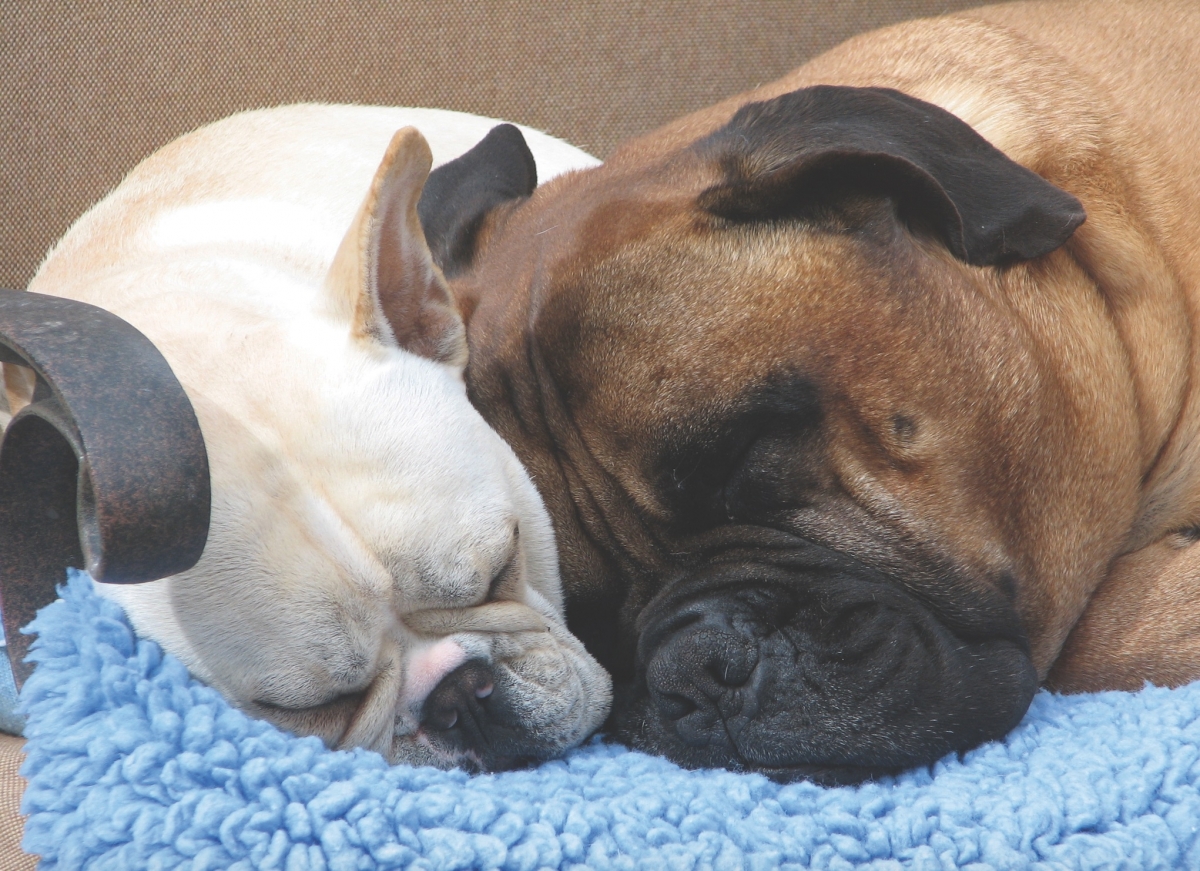 Antje Fray of Washington, Conn., inherited three Frenchies, and merged them into her pack seamlessly.
“They seem to share the same happy attitude for life – snooze when possible and enjoy the day when it’s beautiful outside,” she says. Her Bullmastiffs took to the Frenchie invasion quite readily: “They ‘let’ the Frenchies think they are the boss. They let them take their toys without a problem and tolerate them jumping all over them. If they have had enough, the Bullies get up and move.”
The biggest problem is all the explaining she has to do on walks. “Most people who see them look closely, not believing their eyes,” she says. “Some have asked if ‘the small dogs are the puppies’ or somehow related.” 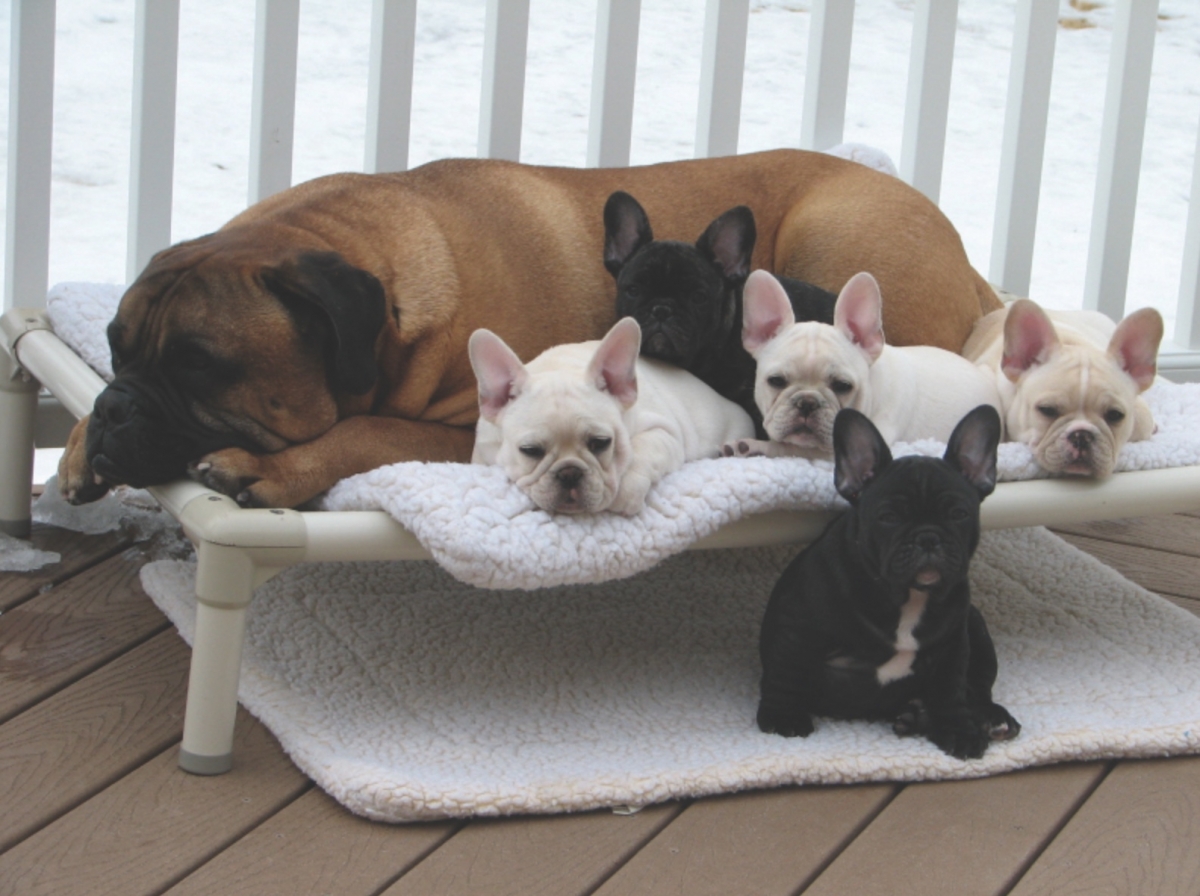 Smush-faced breeds are not born equal: French Bulldogs, it seems, have the advantage over similarly sized flat faces such as Pugs or Boston Terriers when it comes to communing with the Bullmastiff soul.
Kay Reil of Bramstoke Reg’d Bullmastiffs in Grimsby, Ontario, Canada, acquired a Pug when her kids wanted a smaller dog to show in Juniors, “but the shedding was horrendous and the attitude was worse,” she remembers. “They would not back down from any size Bullmastiff.”
Enter an irrepressible little pied Frenchie with a black bunny tail named Lily. “I hadn’t seen anything much cuter than this, and I think that the Bullies felt the same way because they let her get away with murder,” Kay says. “She is right in the middle of any wrestling tournament, and when one of the big guys happens to be on their back during the wrestling, she takes the opportunity to hop on and have a hump.”
Thus her nickname: “Humperdink.”
Unlike the Pugs, Lily “has enough respect for them to know when enough is enough,” Kay says. As a puppy, she made a habit of curling up in the loin of Kay’s 140-pound male, sleeping soundly. “She is great entertainment for the Bullmastiff puppies as Frenchies are so sturdy and tough,” Kay notes. “They just seem to bounce off the brick-wall Bullmastiffs.”
Simpatico souls with Spaldeen constitutions – as these photos attest, it’s a match made in heaven.
© Modern Molosser Magazine. This article may not be reposted, reprinted, rewritten, excerpted or otherwise duplicated in any medium without the express written permission of the publisher.
Wed, 03/31/2010 - 3:07pm