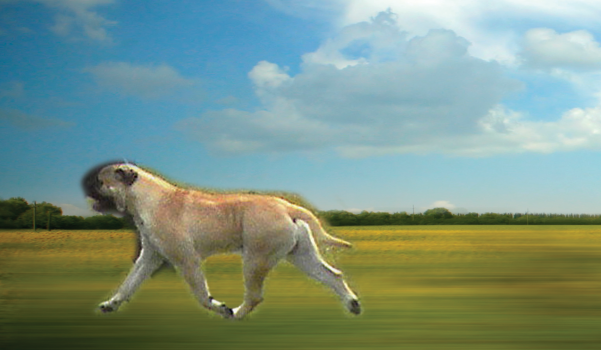 Getting a handle on correct Bullmastiff gait
By
Alan Rostron

In the 55 years that I have been associated with the Bullmastiff, I have had many conversations regarding the desired movement for the breed. Although there have been many interesting and informative discussions, on more occasions than I would care to mention I have heard some of the most ridiculous statements, so much so that it made me wonder just what these people imagine true, sound Bullmastiff movement to be.

Some of these statements were made by long-established breeders, and on occasion by people who are allowed to judge the breed. They only show that those making them have little knowledge about the construction and movement of the breed.

That’s quite understandable in the case of the novice – after all, we all had to start somewhere – but when judges and established breeders think the same way, one is greatly concerned for the future of the breed.

Although I will not be around to observe it, I would hate to think of the breed that I love going down such a disastrous road that it may finish with very few dogs that can move with the required purpose and drive.

It is with these thoughts in mind that I decided to write this article, in the hope that it may bring the possible future problem to the attention of the true lovers of the breed, and that they may take steps to avoid them.

Sound movement is inseparable from correct construction. A fit, healthy dog, if he is correctly constructed, should cover ground with a spring in his step and a hint of arrogance in his posture.

The U.K. standard says: “Movement indicates power and a sense of purpose. When moving straight neither front nor hind legs should cross or plait, right front and left rear leg rising and falling at same time. A firm backline unimpaired by powerful thrust from hind legs denoting a balanced and harmonious movement.”

This, one would think, is self explanatory. The only thing to add should be that good extension of the foreleg is required, together with flexing of stifle and hock to bring the rear foot well under the body, thus facilitating propulsion and drive. I must mention here that although a hackney movement looks flashy, it is incorrect and highly undesirable.

When viewed from the front there should be no paddling or plaiting action. The legs should move nearly parallel to each other with the elbows close to the body. As speed increases, they should begin to converge slightly; however, when the dog comes to rest he should stand foursquare. It is highly undesirable to see, when the dog is moved at the correct speed, the legs converging so far as to be single tracking or, worse, crossing.

When viewed in profile, there should be good reach of the forelegs, and the pasterns should demonstrate that they are firm and strong. The stifle and hock should flex sufficiently to allow the rear foot to land approximately in line with the center of the body. If the hind legs cannot function in this way, they will give very little drive. The topline should be held firm, with no dropping of the topline, especially behind the withers, nor should there be a pronounced rise over the loin.

The head carriage should be above the level of the topline as this facilitates better reach of the foreleg, thus giving better balance.

The foreleg can only be brought fully forward when the head is carried high and supported by the neck muscles. Such a configuration permits a considerably longer stride by enabling the brachyocephalicus muscles, which pass from the skull down the neck and are inserted into the bones of the forelimb, to more efficiently bring the leg forward.

Nothing looks worse than a dog moving with his head down rolling from side to side with the often accompaniment of a slack, rolling body lumbering around as if it is too much effort to move. Such low positioning of the head when on the move is that of Scenthounds, where a head lower to the ground is needed to fulfill their purpose.

A dog with an upright shoulder usually carries the head horizontally or in extreme cases even lower when in motion instead of lifting the head above body level, as it should. An upright shoulder coupled with a short neck will force the head carriage even lower so that the head drops down far below the level of the topline. Correctly angulated shoulders will allow an upright head carriage, which in turn will encourage the muscles responsible for advancing the forelimb to contract with full advantage.

When the Bullmastiff is moving at a trot, one should be able to see a firm topline and a triangle formed between the foreleg, the rear leg and the topline as the rear leg lands at the place from which the foreleg leaves the ground. These will form the two sides of the triangle, and the body completes the top. To further illustrate this, if we look at the Bullmastiff, the height from the ground to the withers is approximately that of the body from the prosternum to the rear of the pelvis, and at the same time the limbs are of a proportionate length. With such a construction when moving at a reasonable pace, the hind feet will as required land fairly close to where the front feet were.

As one can appreciate, the shoulder construction plays a substantial part in the front movement – in particular the assembly and angulation of the scapula and the humerus.

Given that the configuration of the scapula and humerus is acknowledged to be the mainstay of the front movement, one must be aware that one of the prime factor in determining the angle of the scapula is the curvature of the first four pairs of ribs or the point of greatest curvature. If the curvature is too great then the upper ends of the scapula are forced apart, which will lead to a more upright scapula with the predictable restricted reach. The breed specifics call for a wide front with chest and brisket well let down, together with a well-sprung ribcage; this is not to be confused with a barrelled ribcage. The greater curvature of the ribs will naturally give rise to a slightly steeper angle of the scapula than that expected in the majority of other breeds. This steeper scapula will allow the foreleg to pass over the greater curvature of the ribs. Because of these requirements, the optimum angle of the scapula to compensate for the spring of rib and avoid loose or tied elbows and still to allow good extension of the foreleg will be a little more than the 45 degrees that is recognized as the optimum in most breeds. For the Bullmastiff, to fulfill all of the aforementioned requisites, this angle should be approximately 50 degrees. This degree of angulation will allow for good extension of the foreleg and the desired typical front movement of a heavier-built breed of dog.

After the shoulders, the next part to assist in achieving excellent front movement is the pastern. This should be straight, firm and have the ability to carry weight, thus preventing the feet from spreading on landing. It is also an absolute necessity to have the right amount of spring with which to absorb the stresses incurred through the foot on landing.

Clearly, as explained, with the angle of the scapula being closer to 50 degrees, the forward reach will obviously be a little less than if it was 45 degrees. This is not, however, to be considered as a reason for the much shorter reach to be seen in dogs with insufficiently angulated scapula. Such restricted reach should not be accepted. As can be seen, the head carriage together with the assembly of the forequarters plays an important part in attaining the correct front movement.

The hind legs should again move as the front – nearly parallel – and when viewed coming and going should be in the same plane as the front. There should be no crabbing, overreaching or pacing. They should not toe in or out when the dog is moved at the correct speed, and definitely not be so close as to touch each other or cross; there should be no distorting of the legs either inward or outward. The hocks and the rear pasterns should be firm and straight when viewed from the rear, and there should be no sideways movement of the hocks. Hocks should be set at a moderate height, and there should be moderate angulation of the hock joint. When viewed from the rear, the hock and rear pastern should be perpendicular to the ground. From the hock joint to the floor, the legs should move parallel to each other. However, as with the front movement, they will converge slightly as speed increases, and, as with the front, when he comes to rest he should stand foursquare. When assessing rear movement there is very little that looks worse than to see the hocks flapping about loosely or moving so close they actually touch each other. UK Ch. Graecia Mercury, Best of Breed at Crufts in 1996.
To attain the requirements for such movement it is most important that the anchor point for the hindquarters, the pelvis, is set at an angle of approximately 30 degrees to the floor, and the assembly of the hindquarters is commensurate with that of the forequarters. Too steep an angle of the pelvis can lead to over-angulated hindquarters, with the resultant loss of power and drive. This is because with excessive angulation the power is directed onto the wrong area of the acetabulum and will therefore reduce drive. On the other hand, too shallow an angle of the pelvis will result in most of the propulsion being utilized in lifting the hip instead of driving the dog forward. An often seen consequence of such a shallow angle is that the tail is incorrectly carried over the level of the topline as in a Hound fashion. A good, firm, correctly set hock and correctly angulated stifle with an ample, muscular second thigh allow the dog to flex and drive with power, thus attaining the desired dynamic movement.
The Bullmastiff is a medium-size breed, and as such should have movement appropriate for his size. One would not expect his movement to be the same as that of a Toy breed, nor should it resemble that of a giant breed. It should show coordination, power and resolve. Balance and free-flowing, harmonious movement with drive are only attained when there is complete harmony between the front and rear assemblies, with no exaggerations of either. A dog that is properly balanced is light on his feet and a pleasure to watch.
© Modern Molosser Magazine. This article may not be reposted, reprinted, rewritten, excerpted or otherwise duplicated in any medium without the express written permission of the publisher.
Sun, 09/06/2015 - 10:06pm