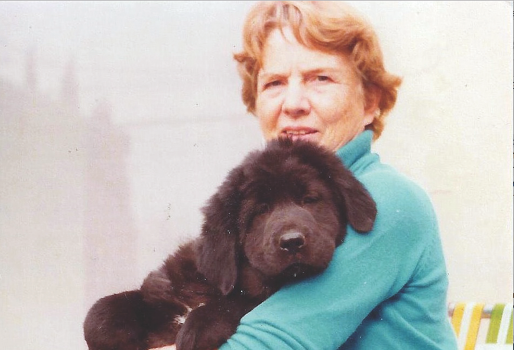 My life with Tibetan Mastiffs began with several acts of kindness, one of which was decisive.

I’d been interested in the breed for more than 20 years, and had contacted the Nashes of Ausables Kennels in New York when they placed their first “ad” in a dog publication. This must have been about the time of their famous “A” litter. I had to tell Linda Nash, who’d been kind enough to spend an hour or so interviewing me on the phone, that my life at that time didn’t permit me to take a puppy. But I promised I would when I could.

When the circumstances were finally right, in 1994, Linda was no longer involved with the breed. I was preparing to go to Southern California to see a litter when the massive Northridge Earthquake occurred.

Around the same time, I was introduced, by phone, to Ann Rohrer. I knew of her landmark book – The Legendary Guardian – and was thrilled to “talk TM” with her. Our connection was instantaneous and powerful, in that way that sometimes happens when kindred spirits meet. I was dithering about going south and worrying about where I would stay when Ann stunned me by proposing that I stay with her. She hardly knew me, and I felt it would be a terrible imposition. But Ann was absolutely insistent that I should come ahead, even when I explained that I planned to bring a veterinarian friend. Sarah and I arrived at a time when Ann was confined to a wheelchair, as she’d been ill. But it was obvious that she was “a woman of valor,” one of those rare women who were cut from a different cloth than most of her generation. She was what we used to call “a great lady,” but not one who would be primarily known for her starched curtains and white gloves, though assuredly she had a lovely home and knew when and where gloves were required. She had a lively intellect, a remarkable confident air, and a searching curiosity about different cultures. She was in no way naїve, but her approach to others was open and kind. She began by expecting goodness from others, which almost always guaranteed that she would receive it.

Of all the peoples she had encountered in a fascinating and well-traveled life, the Tibetans clearly had her heart. She described her first sight of a Tibetan, coming down from the highlands into Burma (now Myanmar) and how thrilled she was. She was obviously what Tibetans refer to as “a past lifer.” She had a profound connection with Tibet and its people, despite having been born in the West, and Tibetans invariably responded to her as a friend.

She described her enjoyment of the Tibetan world view, which she characterized as open to all, because anyone you met might have been a relative or a friend in a previous existence. She was thrilled with the way this effaced all barriers of social class. In fact, I have come to realize that the social fabric of old Tibet was a little more complex than that, but what I think might be true is that Ann’s experience of Tibetan attitudes mirrored the openness she demonstrated and elicited from everyone she met.

She was quite familiar with diplomatic environments on the highest levels, but that didn’t hamper her ability to gallivant about in the hinterlands, eating and drinking what most Westerners would have considered unspeakable. She described with relish the famous salted Tibetan tea with yak butter, which she found delicious. She thought nothing was more wonderful than a steaming cup, when coming in from the dry cold of the high plateau, unless it was one of the little potatoes that the Tibetans kept boiling on the stove. She described how delicious they were, when you were tired, cold and dehydrated, and popped one into your mouth.

We spent a lot of time talking that first weekend. I wanted to know everything about the introduction of the Tibetan Mastiff into the American West. She emphasized the character of the authentic dogs, which she greatly admired. She didn’t spare herself during an account of reprimanding her famous Kalu for destroying a bush she had just planted. Despite being an adult male Tibetan Mastiff, Kalu accepted the reproof respectfully, with good-natured dignity, but it became almost immediately clear that another dog was the culprit. Ann threw her arms around Kalu’s neck, begging his pardon and asking his forgiveness. She was deeply affected by this incident, when she had misjudged his character. It had been many years before, but she almost cried when she talked about it.

Ann’s Tibetan Mastiff, Sugar, watched me suspiciously at first. True to her kind, Sugar was a serious guardian, and she made it very clear that she wouldn’t permit anything to harm Ann. Since I respected that, Sugar relaxed with me. Ann also had a pair of Tibetan Spaniels and a little Tibetan Terrier. It was a charming tableau when someone came to the door. First the little dogs would yap and bark, then Sugar would rush to the door with a deep bark, then the spaniels would leap on the tops of the nearby furniture, and it was obvious that this must be the way they were intended to interact for the protection of Tibetan families.

When it came time to go to sleep, Sugar came in and saluted us very formally, pressed her nose into each of our hands, fixed us with a serious gaze, and then departed. She was clearly saying: “I really like you both, but you understand that Ann is my responsibility, so I cannot stay and protect you. Good night.” In fact, we discovered that she went into Ann’s room for the first part of the night, then stationed herself right at the front of the hallway to both Ann’s room and the guest room, so that no one could get to any of us without Sugar knowing about it. We were very struck with the sense of responsibility that Tibetan Mastiffs possessed. That was merely the beginning of a profound and rewarding friendship that extended until Ann’s death some years later – and perhaps beyond. This much I learned from the Tibetans – friendship isn’t limited by the physical.

Ann had already donated much of her collection to various institutions, but asked me to catalog her remaining Tibetan artifacts, and find a suitable home for them. An attempt to get Tibet House in Manhattan to take the collection led to a hilarious trip across the California desert with Robert Thurman, the most significant Tibetologist in the United States at that time, and his wife, Nena. We listened to the United Nations vote on the Chinese treatment of the Tibetans on the radio, and every time the vote went our way, we cheered. Robert mentioned that his daughter was living in Southern California, and it was only later that I realized that this was the beautiful actress, Uma. All contacts with Ann had this peculiar “star crossed” quality. Strange things would happen, and strange connections would be made.

She was a magical friend, with a fine mind and a great sense of adventure. She was a consummate lady, but she had a wicked sense of humor, which she’d only reveal if she knew you well enough. She loved Tibet, her country, her family and Tibetan Mastiffs. She was more in the mold of Amelia Earhart than of the young ladies of her generation, who were trained to know how to conduct themselves in drawing rooms ... but she was at home in either world. Even when she was severely debilitated, she saw to it that her hair and nails were beautifully groomed. That wasn’t vanity. That was self-discipline and an unwillingness to become slack and sloppy. Her manners were exquisite, but she was always “a natural.” She was the sort of person who was at home in her own skin.

The thing I most treasure, though, in all the conversations and all the stories and all the information, was a piece of wisdom she imparted to me very early in our acquaintance. I was worrying myself sick about choosing the right puppy and being the right person for the puppy. I was dithering about what to do, when Ann said: “Mary, I can see that you are taking this very seriously, but you are worrying unnecessarily. The Tibetans believe that each of these dogs has a ‘spirit’ that always watches over it. These dogs will find their true home. Don’t fear to take the puppy you are thinking about. It will be all right.”

I realized that there was a deeper wisdom in what she was telling me, and I called and said I’d take the puppy. The next day, I departed with my adored first Tibetan Mastiff puppy, Dzogchen.

And therein lies a tale ... Mary Fischer says everything she has ever loved begins with the letter “H” – horses, harps, hounds and husband. An Egyptologist with a particular interest in the theriomorphic deities, she resides in Northern California with two extremely spoiled and adored dogs – a Tibetan Mastiff and a Finnish Lapphund.

© Modern Molosser Magazine. This article may not be reposted, reprinted, rewritten, excerpted or otherwise duplicated in any medium without the express written permission of the publisher.
Fri, 08/05/2016 - 10:40pm

How to Speak Cane Corso (and Mastino, too)
How do you pronounce "Cane Corso"? What exactly is a "giogaia"? Our guide to the most common terms used with the Neapolitan Mastiff and Cane Corso will have you "al corrente" -- up to speed -- in no time!