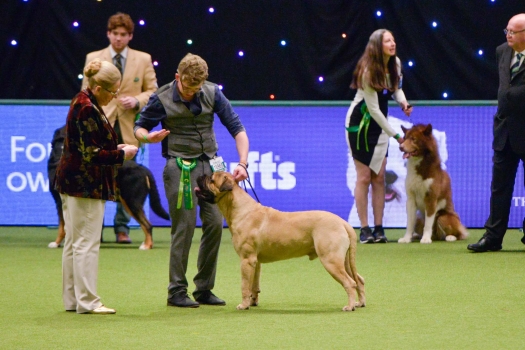 10 Things to Know Before Judging the Bullmastiff

Read the history of the breed, which began in England in the late 1800s. While it is true that the job for which the Bullmastiff was originally created no longer exists, the characteristics developed remain in the dogs of today. His duties took place at night. The dog was the gamekeeper’s right hand, and it was his job to work with the gamekeeper to apprehend the poacher (poaching was a capital offense in those days) by dispatching the poacher’s dog (usually a lurcher), and then knocking the poacher down and holding him until the gamekeeper could get him under control. This required a dog of stability, one who could wait for the appropriate command, leave the game alone, dispatch the poacher’s dog and then hold the poacher for the gamekeeper. This meant he would hold him but would not savage him. During the day, the Bullmastiff was a devoted companion to the gamekeeper’s family. He had to have total stability and loyalty to “his family” and have a rock-solid temperament. 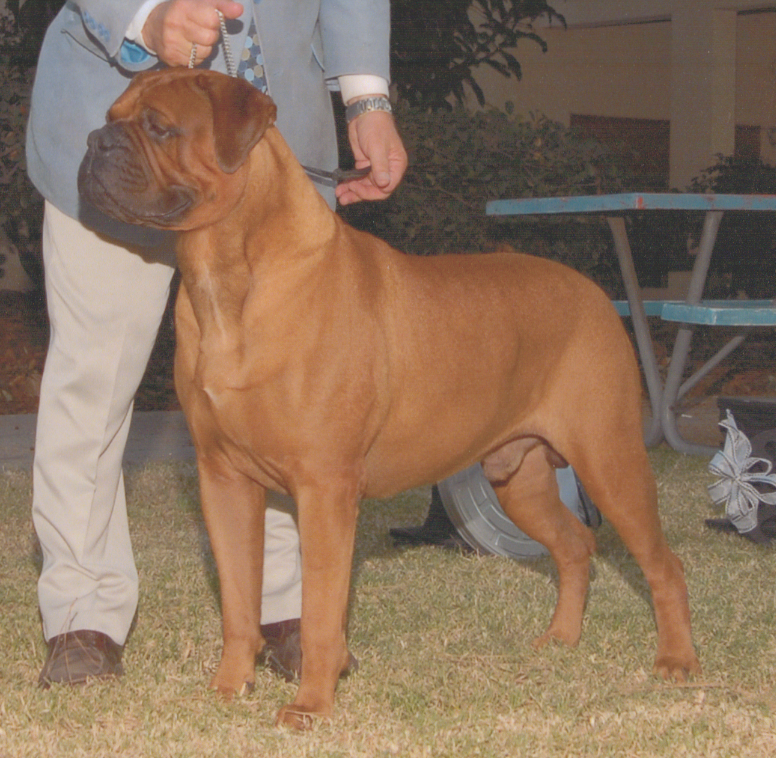 The Bullmastiff should exude power without being cumbersome. He has a presence about him that says, “Look at me.” We have a two-inch tolerance in each gender: 25 to 27 inches for males and 24 to 26 inches for bitches. They should give the impression of substance, which comes from correct muscle definition and not fat. A fat Bullmastiff cannot do the job he was developed to do. When judging the Bullmastiff, please take into consideration that a 25-inch male may conform more closely to the standard than the 27-inch exhibit. Bigger is not necessarily better. Unfortunately, in many instances the eye goes immediately to the larger dog, but if the correct equations are not there – i.e., proper length of back in proportion to height, substantial bone to go with that height, weight in proportion to that size but not to the extent it gives a bovine appearance – then it is time to look beyond the height of the dog. 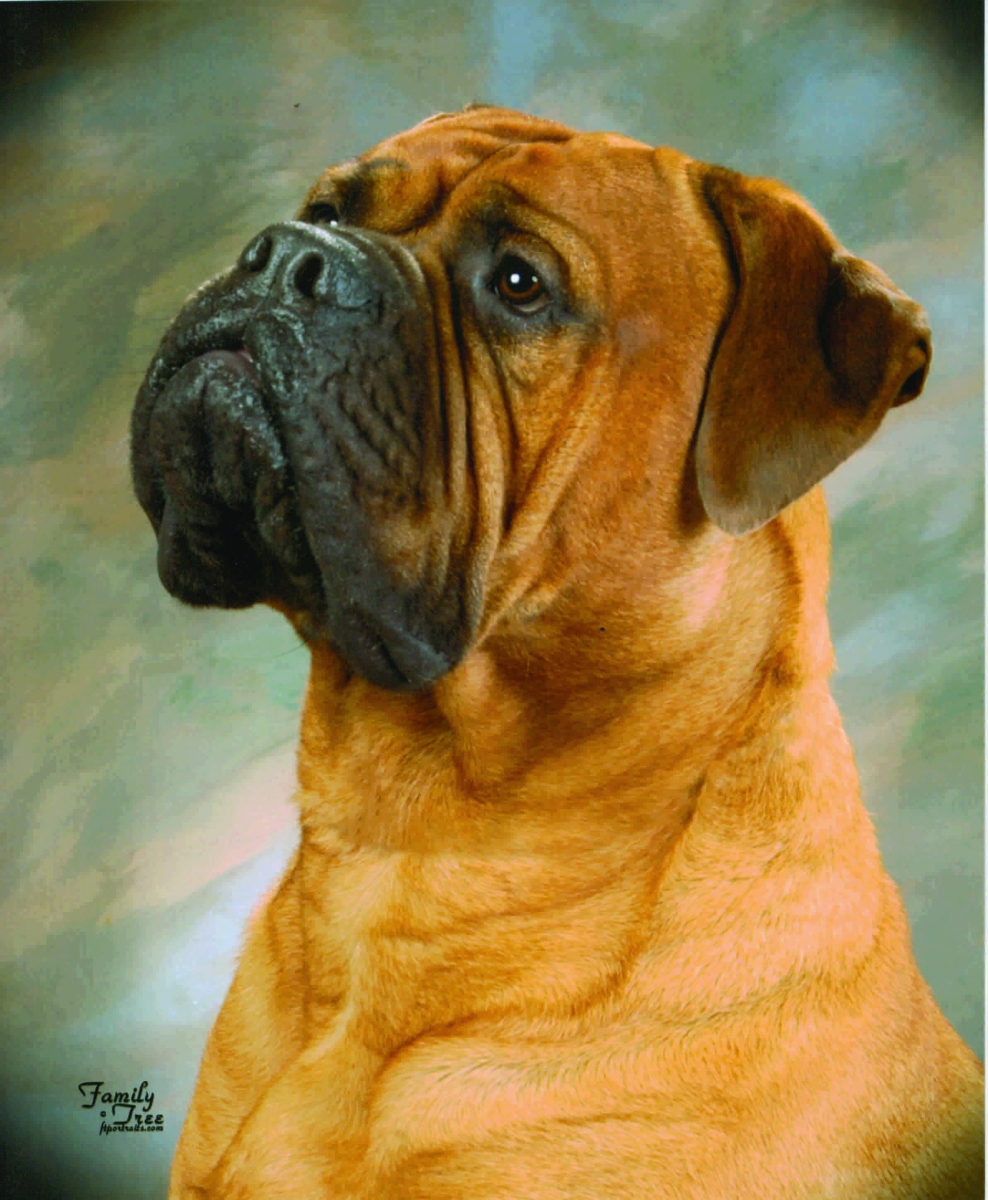 As with many Working breeds, a correct headpiece is very important. Breeders are constantly challenged to produce dogs with heads that veer neither to the Mastiff nor the Bulldog. The head should denote essentially a cube on a cube. The skull should be large with a moderate stop. There should be a fair amount of wrinkle when the dog is alert, and cheeks should be well developed. The top skull should be flat, ears should be set on high, held close to the cheeks, giving a square appearance, and should be darker in color than the body. Eyes should be dark in color, and medium in size and set wide apart.
The muzzle must be short and deep, with a wide underjaw. Sometimes appearances can be deceiving, and a dog can give the impression of a wide underjaw, but in fact lacks the width to go along with the required squareness of the muzzle. Bite should be level to slightly undershot. While I appreciate a level bite, I am also aware that the breed originates from two breeds that were undershot and take that into consideration. However, the bite should always be covered so as not to detract from the square appearance. From time to time you will see specimens in the ring with a wry mouth, which is definitely not acceptable. Flews should not be too pendulous (reverting to the Mastiff). The mask should be dark. My preference is to see the mask cover the muzzle, but not to extend all the way up to the eyes, since it takes away from the expression of the dog.
With all these things in mind, as you approach each specimen the head should denote strength and power, giving the appearance of a dog who is impressive, docile but confident in his demeanor.

A Bullmastiff should have a slight arch of neck, moderate in length, setting off his beautiful headpiece. The neck should be muscular and almost equal the circumference of the head. A dog that lacks length of neck gives the appearance of having the head stuck on his shoulders – not a pleasing picture. The topline should be straight from the withers to the loin with a slight rise over the loin. The length of the back should give the impression of a well-balanced dog. The loins are wide and muscular, denoting strength. The body should have good spring of ribs, the chest wide and deep, set down between the forelegs. The tail should be strong at the root, wide, extending from the base of the spine and tapering to the hocks; it may be carried down or curved, but never carried hound fashion.

The shoulders should be muscular but not overloaded and slightly sloping – forelegs are straight with good bone and set wide apart (accommodating that nice chest). The elbows should be neither turned in nor out, pasterns straight, feet medium size (personally I like nice “cat feet”) with round toes that are well arched. Nails should be black.

Coming back to a muscular dog, the hindquarters should have a well-developed second thigh that denotes power but is not overdone (remember the dog was bred to cover short distances very quickly, and a powerful rear is essential). He should have moderate angulation (again, needed for powerful movement). Obviously, cow hocks and splayed feet are not desirable and do not mesh with the need to have a powerful rear.

The coat should be short and dense. We have three colors: red, fawn and brindle. When judging, please do not overlook the brindles. Remember, this was the original color of the breed (you can’t see a brindle in the dark). This is a color you must have your hands on. The striping on brindles can be extremely deceiving and can give the impression of a fault that is simply not there when you put your hands on them. I personally like the reds and fawns to be clear, but if you have a dog that is otherwise a beautiful specimen, I’ll take a little sootiness. A small amount of white is permitted on the chest (the less the better on a brindle, for obvious reasons).

A Bullmastiff should move with power, freely and smoothly, with good reach and drive (remember those muscular hindquarters and well-developed fronts). The topline should be level as the dog moves around the ring. He should move in a straight line, with the feet converging under the body; the joints should never twist in or out, and there should be no crossing over of the feet.
Before leaving the issue of movement, I must give way to a pet peeve. Please don’t reward the Bullmastiff that is flying round the ring at breakneck speed. Bullmastiffs are not Afghan Hounds, nor should they move like them. I like nothing more than to see a good-moving dog step out, but you can hide an awful lot of faults when you are racing round the ring. Far better to have them go around a second time at a reasonable pace, which will reveal any movement faults. 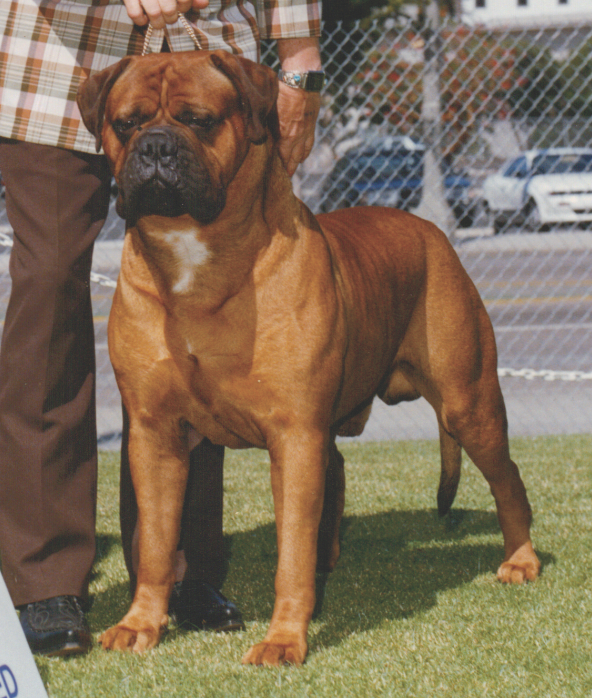 A Bullmastiff has to have a good temperament or, in my opinion, he isn’t a Bullmastiff. They are much too big and powerful an animal and could do a great deal of damage if they have an unsound temperament. Temperament is at the heart of the breed. They were beautifully trained by their gamekeeper from puppyhood on to do a specific job at a specific time. The rest of the time was spent with the gamekeeper’s family, which included children of all sizes. This was the dog’s “family,” and he would die to protect it.  This trait remains to this day, and it is what makes him such a good family companion.
10
So now you have the tools at hand to judge the Bullmastiff. Watch as your exhibits enter the ring. There will be one or two that catch your eye. Watch them gait around the ring (they usually go at a little slower pace when trotted as a group), make a mental note of those with great reach and drive who move effortlessly around the ring. Then they are lined up for examination. Take time to look for those dogs on the line that exemplify the standard. Are they an example of a dog that exhibits confidence, power, proper musculature, the proper balance of height and weight? Do the lines on the dog flow, or could you bisect the dog with a mental ruler and does it look like two different dogs?
Next you get to begin your examination by getting your hands on the dog. Does the head exhibit the proper characteristics of the breed? Is he a giant Bulldog, does he lean toward the Mastiff, or does he combine the attributes of both so that he exemplifies what a Bullmastiff should look like? Do the lines flow from his substantial head to a neck that is muscular with the slight arch? When you put your hands on the dog, is he well muscled or does he tend to be sloppy and fat? As Judge Wilcox used to say, “This one’s an easy keeper.” Is his topline straight? Does he have the moderate angulation called for in the standard? When he moves out, does he exhibit the confidence and power necessary for a working dog? Are his reach and drive exceptional? When he returns to you, is he moving straight and true?
Finally, do line your exhibits up to show you their fronts and rears – comparing one to the other. Are the fronts true or are they easty-westy or knuckling over? Do they have nice tight feet? What about those rears – are they substantial? Is the second thigh well developed? Is the rear in disproportion to the front, looking weak and weedy?
Hopefully you have now found the dog that in your opinion most closely adheres to the standard. There are times when the choice is easy, and there are times when it could have gone either way on a given day.
Have fun judging this most magnificent breed. Hopefully you will come to admire them as much as I do. 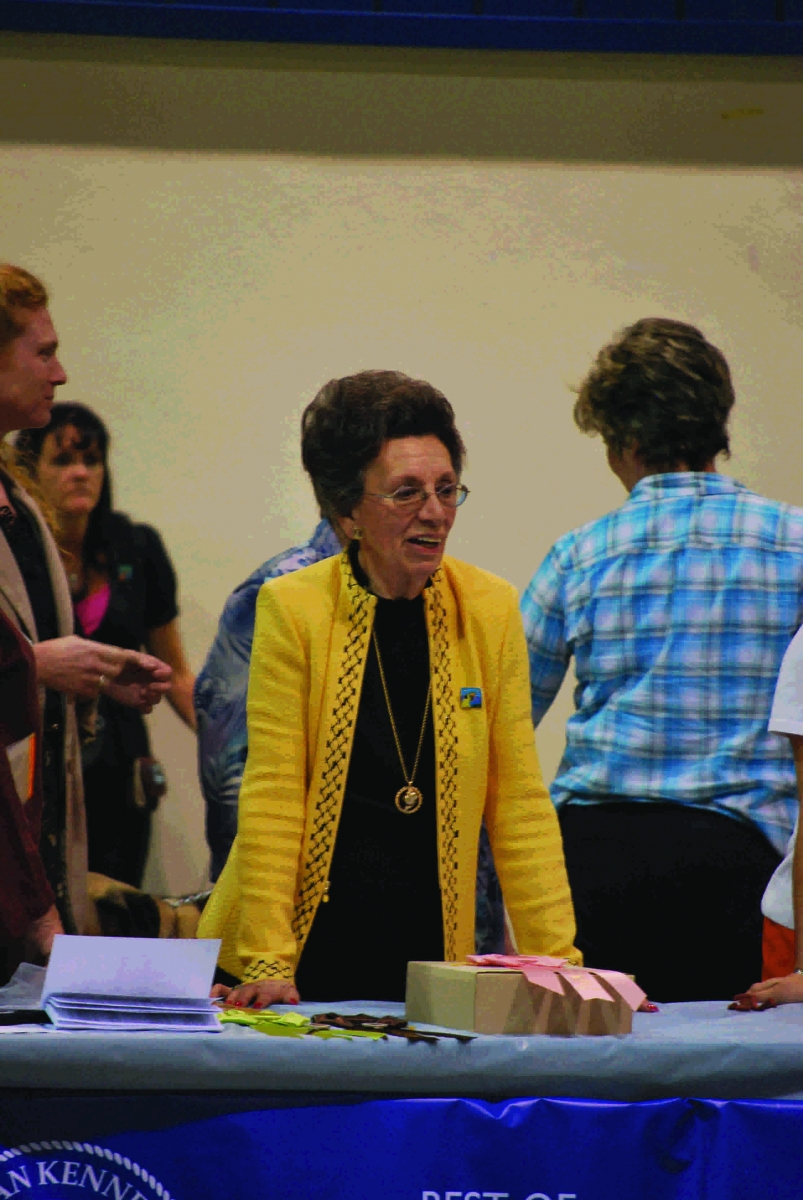 Pat O'’Brien of  Bullmast Bullmastiffs in Fullerton, California, has had Bullmastiffs all her life: She was born in the house with a Bullmastiff and has had them ever since. She is the oldest continuous breeder of Bullmastiffs in the United States, with her kennel established in 1948.  She does not breed extensively, usually one or two litters per year. Her original stock came from England, and she continues to periodically return to the English lines.
© Modern Molosser Magazine. This article may not be reposted, reprinted, rewritten, excerpted or otherwise duplicated in any medium without the express written permission of the publisher.
Fri, 03/16/2018 - 1:19pm