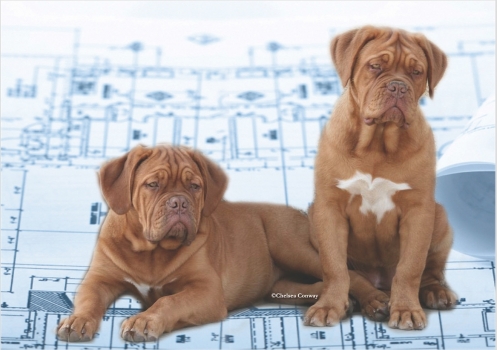 Crafting the American standard for the Dogue de Bordeaux took time, patience ... and lots of overseas input
By
Denise Flaim
Mark McElderry of Northland Bordeaux in Earlville, Ill., acquired his first Dogue de Bordeaux 19 years ago. Because the breed was so rare in this country, McElderry and his late wife Cindy waited a year and a half for a puppy bitch from Pete Curley, importer of the “Turner and Hooch” dogs that put the breed on the map stateside.
At the time, there were two Dogue de Bordeaux registries and their related clubs, neither of which survive today. And at the first National Specialty the McElderrys attended, the entry was all of 15 dogs.
You’ve come a long way, dogue. Today, the Dogue de Bordeaux is fully AKC recognized, and the red dogs with the strikingly smushed faces are serious contenders in the Group ring.
But it was a long journey getting there. It took from 2004 to 2007 to arrive at an AKC version of the Dogue de Bordeaux standard, a process that McElderry spearheaded. McElderry says he was approached to work on the American standard based in part on his profession: As a bank examiner with the FDIC, he is detail oriented and also accustomed to doing a fair amount of writing at work.
“When we started seeking AKC recognition, the standard was one of the main projects,” he remembers. “It was a several-year process – you’d think I was writing it from scratch.” 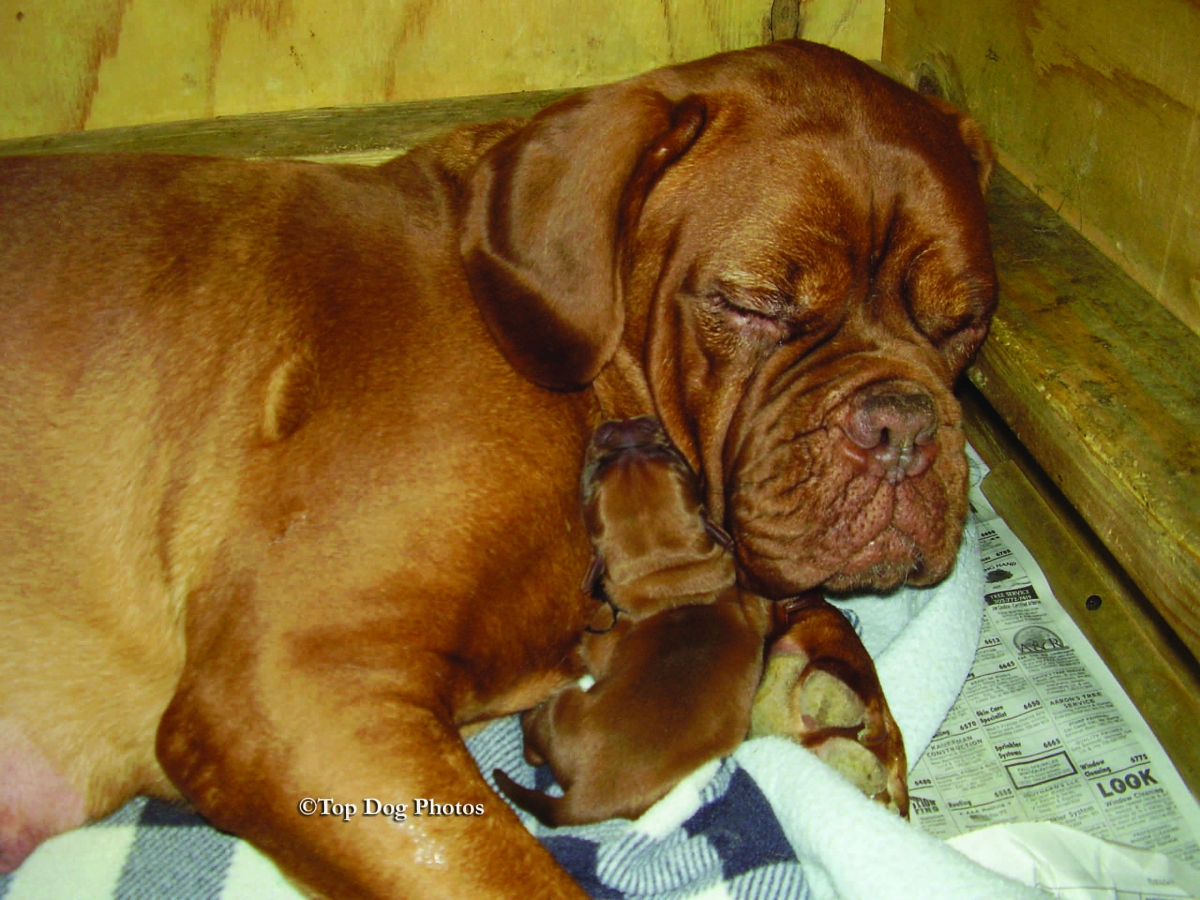 Part of the challenge was that the new standard not only needed the approval of the parent club, the Dogue de Bordeaux Society of America, and the American Kennel Club: McElderry also wanted the blessing of Prof. Raymond Triquet, the heralded breed expert who authored the modern French standard.
Also providing input was well-respected Mastiff judge and publisher Bas Bosch of The Netherlands (who was recently on this side of the pond adjudicating Mastiffs and Bullmastiffs at a damp Bucks County Kennel Club show) and the late Anne Rogers Clark, one of American dogdom’s most respected doyennes.
Because the French Dogue de Bordeaux standard was essentially written by Prof. Triquet, who is an academic with a deep appreciation for precision, it is laden with scientific and technical terminology. The good news was that many of the terms were actually English words; the not-so-good news was some did not pass muster with AKC.
“Typical concave lined brachcephalic molossoid,” muses McElderry, quoting from the French standard’s opening description under General Appearance. “They didn’t like that.”
Armed with Harold’s Spira’s definitive dictionary, “Canine Terminology,” and the American Kennel Club’s guide to writing breed standards, McElderry set out to close the gap between what the French standard called for and what the AKC would accept. His underlying concern, he admits, was that the AKC document be so divergent that “the American dogs were going to be different from rest of the world’s.” 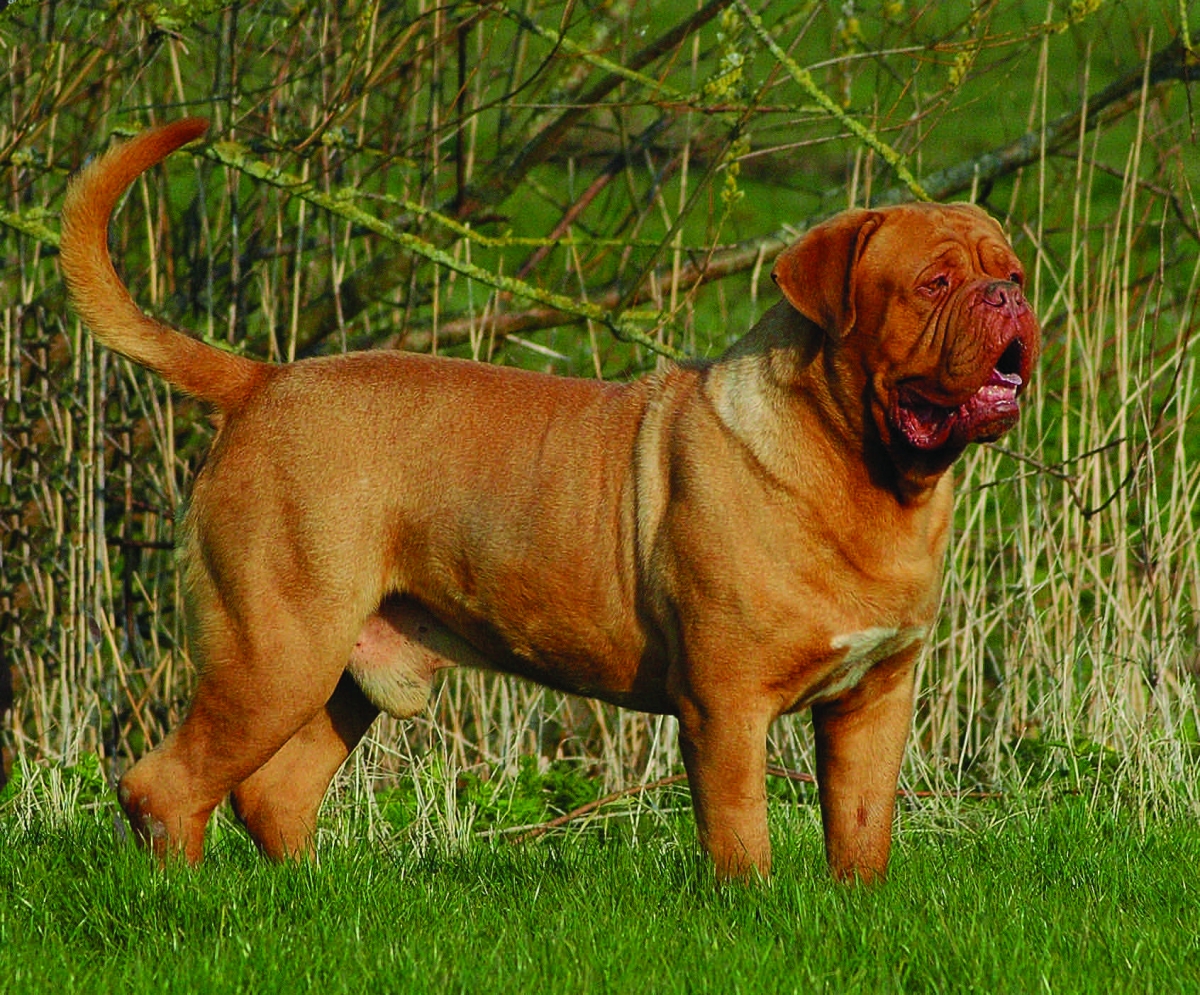 Admittedly, the French standard is repetitive in certain areas, which was streamlined in the American standard. Also eliminated were references to faults or problems that would not be tolerated in any breed, from monorchidism to difficulty breathing.

A persistent concern as the Dogue de Bordeaux progressed toward AKC recognition was that the move would prompt a loss of type as breeders raced to produce dogs with sweeping movement who would stand out in the Group ring.

"This is a Molosser. This is a dog that should have a heavy movement, which has been described like that of a draft horse,” McElderry explains. “The concern was that we are going to have these narrow-bodied, narrow-headed dogs that move like a Doberman.”

It was a fear that so far has proven unfounded, as far as McElderry is concerned. “I’m pleased with the quality of the dogs that became champions” since AKC recognition last year, he notes. If one accepts the definition of a compromise as a solution in which neither side gets everything it wants, then the Dogue de Bordeaux standard that McElderry helped shepherd through the AKC approval process arguably fits the bill. In the American version, that “typical concave lined brachcephalic molossoid” is merely a “brachcephalic molossoid.” But both standards are still very much describing the same dog – the ultimate victory all around.

1337 to 1453. Hundred Years War between England and France, after which the Anglo word “dog” creeps into the Gallic lexicon, eventually spelled “dogue.”

1863. The first French dog show takes place in Paris in the Jardin d'Acclimatiation, with Dogues de Bordeaux entered. The winner was a bitch named Magentas.
1883. Next written reference to the Dogue de Bordeaux. At this juncture, there are three types: the Toulouse (longer bodied, with a large head), the Paris (more wrinkling and heavier bone), and the Bordeaux (more aligned with where the breed is today).
1896. French veterinarian Pierre Megnin writes the first Dogue de Bordeaux standard.
1910. J. Kunstler, a professor of comparative anatomy of the Science Facility of Bordeaux, publishes A Critique Etude du Dogue de Bordeaux ("A Critical Study of the Dogue de Bordeaux").
1970. Professor Raymond Triquet pens the modern standard, in collaboration with veterinarian Maurice Luquet.
1993. French standard is updated, again by Prof. Triquet, with Philippe Serouil, president of the French Dogue de Bordeaux Club, as the breed readied for FCI recognition.
2007. American standard for the Dogue de Bordeaux approved by the AKC.
© Modern Molosser Magazine. This article may not be reposted, reprinted, rewritten, excerpted or otherwise duplicated in any medium without the express written permission of the publisher.
Tue, 07/03/2018 - 4:28pm