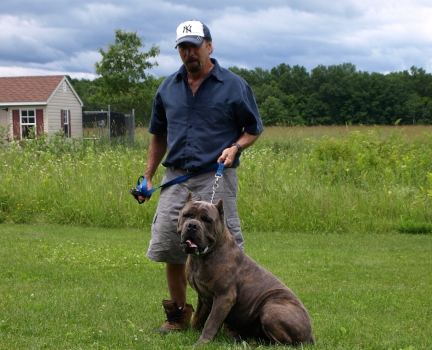 Ed Hodas, the "godfather" of the American Cane Corso, reminisces about the early years
By
Denise Flaim
Something old, something new: That pretty much describes the Cane Corso.
On the one hand, the Cane Corso it is said to be an ancient breed, an all-around farm dog and protector of the Southern Italian contadino for centuries as he tended land and livestock. But on the other hand, it has been very recently formalized, with a standard that was adopted by the Italian kennel club (ENCI) only in 1988, and recognized by the Federation Cynologique Internationale (FCI) in 1996.
Adding to this historical vertigo, the breed in the United States developed simultaneously with the Italian “recovery” effort of the 1980s and 1990s to reinvigorate the breed in its country of origin. The degree to which the American scene diverged from the Italian one – and the question of whose dogs are more authentic and true to the original type – is hotly debated, and likely unresolvable: Like many breeds that teetered on the brink of extinction, the Cane Corso was re-created as much as it was restored.
The breed’s American roots are more like a single tap root: In 1988, Michael (“Mickey”) Sottile Sr., a Neapolitan Mastiff breeder, imported a litter of 16 puppies into the United States, referring to them by their Sicilian moniker, the Branchiero Siciliano. A year later, he imported a second litter from Sicily, and in 1990, he brought in a third from the Naples area.
Sottile, whose kennel name was Alaric, registered these dogs with the now-defunct Federation of International Canine (FIC), a canine registry he and his wife had created in the late 1960s, and eventually rechristened them Cane Corsos.
The dogs in that trio of litters formed the basis of the Cane Corso gene pool in the United States. Particularly influential was the first litter, which produced the “Super Six” – a half-dozen dogs that went on to become champions, many of them with great notoriety in rare-breed rings, in particular a male named Cocomo.
Sottile has since passed away. But the American Cane Corso community has another long-standing founder figure, one who today is referred to by many American fanciers as the “godfather” of the breed on these shores, and whose dogs are in the pedigrees of virtually all American Cane Corsos.
Ed Hodas of Bel Monte Kennels in Barryville, N.Y., got involved in Cane Corsos in 1991, when he saw Cocomo at a rare-breed show in New Jersey that had a champions-only entry.
“Out comes the most magnificent specimen of a dog we have ever seen, winning the tournament hands down,” remembers Ed, who knew Mike Sottile for more than a dozen years before the latter began importing the Cane Corso. As it happened, there was a litter of Cocomo-sired puppies on the ground, and Ed and his wife Kristie immediately acquired a son, soon to be Ch. Rocco. 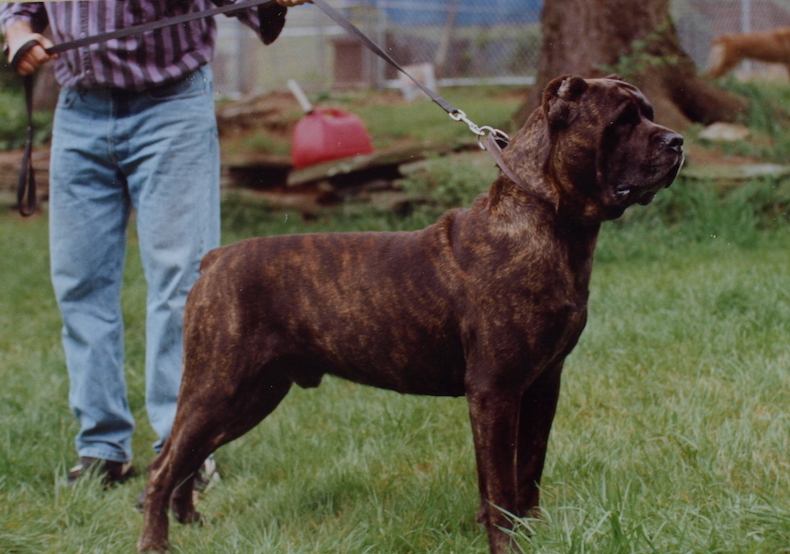 Ch. Cocomo.
Six months later, the couple was able to purchase Cocomo himself, as a foundation sire. The striking brindle was already a mature adult by then, and Ed recalls having to keep the “very dominant male” in the garage for weeks because he would not let Ed approach him. “I had done sleeve work with him before,” Ed explains of the protection-trained Cocomo. “And he didn’t forget.”
Later, in search of more breeding stock, Ed and Kristie accompanied Mike Sottile to Italy, where they were shepherded around by his cousin, Corrado Bellapianta, who owned Cane Corsos and knew local breeders. 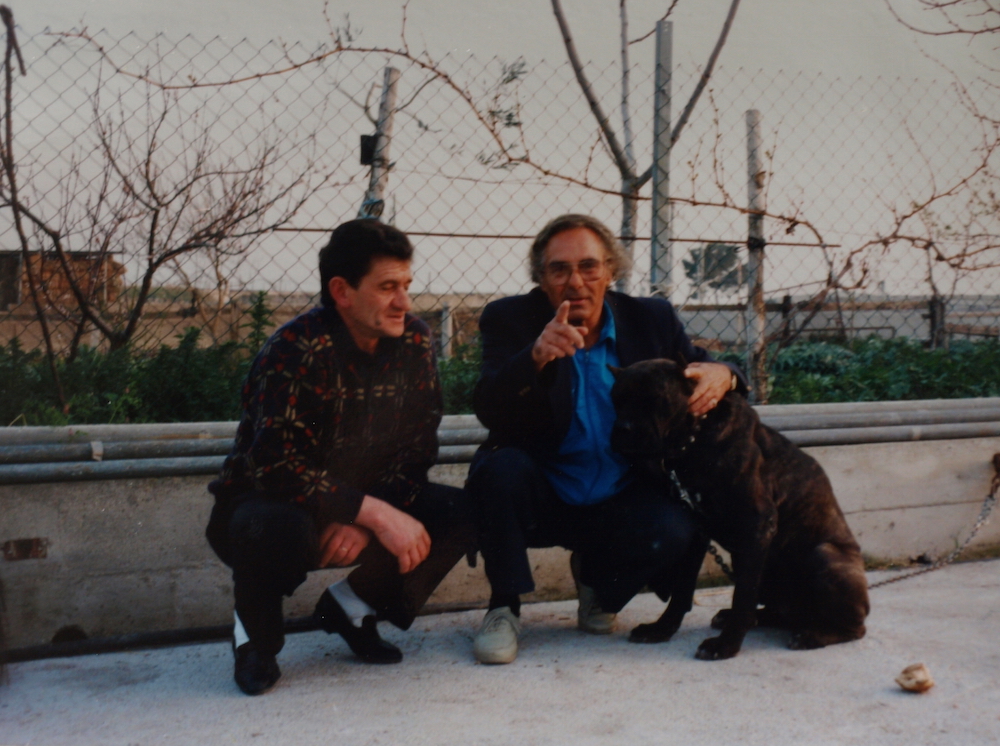 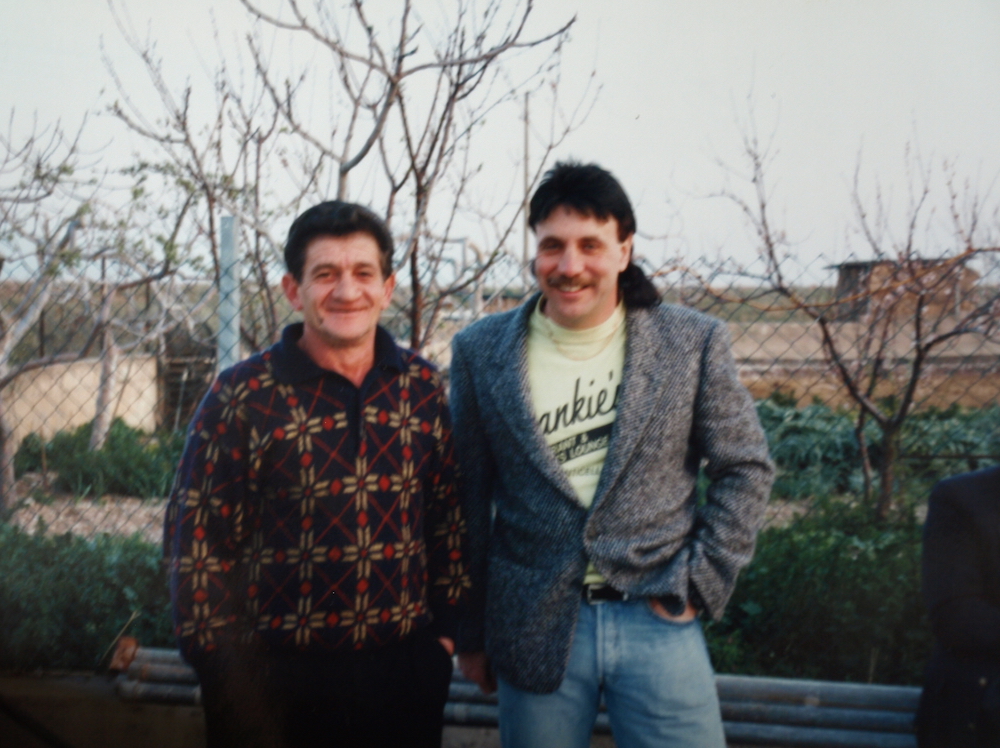 “We were going up single-lane roads, up the sides of mountains, to people’s farms and backyards” in Naples, Rome and Puglia, the region that is said to be the cradle of the breed, Ed says. The farmers “called the dogs all different breed names,” and used them for diverse jobs, from guarding chickens to goats to sheep. “Some looked like American Staffordshire terriers, some were heavier. It was a type of dog, but it wasn’t conformed into a breed yet. But they all were strong dogs, all mastiff-type dogs, all working dogs. They were a top athlete.”
Quality was uneven at best. “We had a hard time finding a good dog,” Kristie notes. Indeed, the puppy that the couple returned with, Corrado, named after Mike’s cousin, didn’t turn out, and was later given away. “There was no consistency” in what the dogs produced, Kristie adds. “A dog you thought would be a grand champion turned out to be an ugly pet.”
Temperaments were also far from ideal. “In the beginning there were a lot that were too shy, or too tough – there was nothing in the middle,” Ed says. 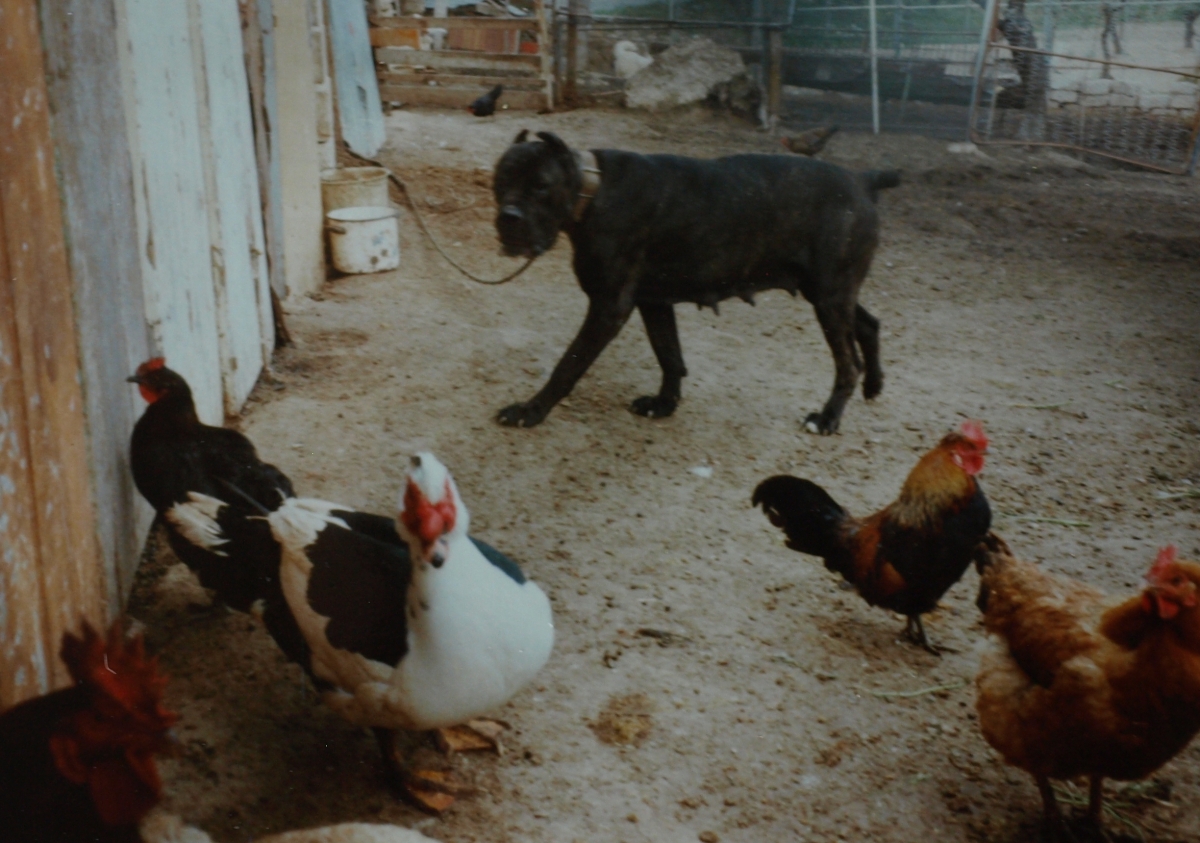 Italian Cane Corso amid chickens.
Intent on preserving and recording the pedigrees of this growing breed, in 1992 Ed and Kristie founded the International Cane Corso Federation (which eventually morphed into the current parent club, the Cane Corso Association of America), as well as the ICCF registry, which is very much still in operation. Though the Cane Corso will be recognized by the American Kennel Club on January 1, many AKC-registered Corsos are still dual-registered with the ICCF, because its pedigrees record rare-breed championships and titles earned in the last two decades.
Ed, a professional kick boxer turned home builder, had bred American Pit Bull Terriers for 20 years before he became involved in Cane Corsos. From the beginning he knew what he would need to do to solidify his line of Bel Monte dogs: tight linebreeding, with his preferred breeding being uncle to niece. 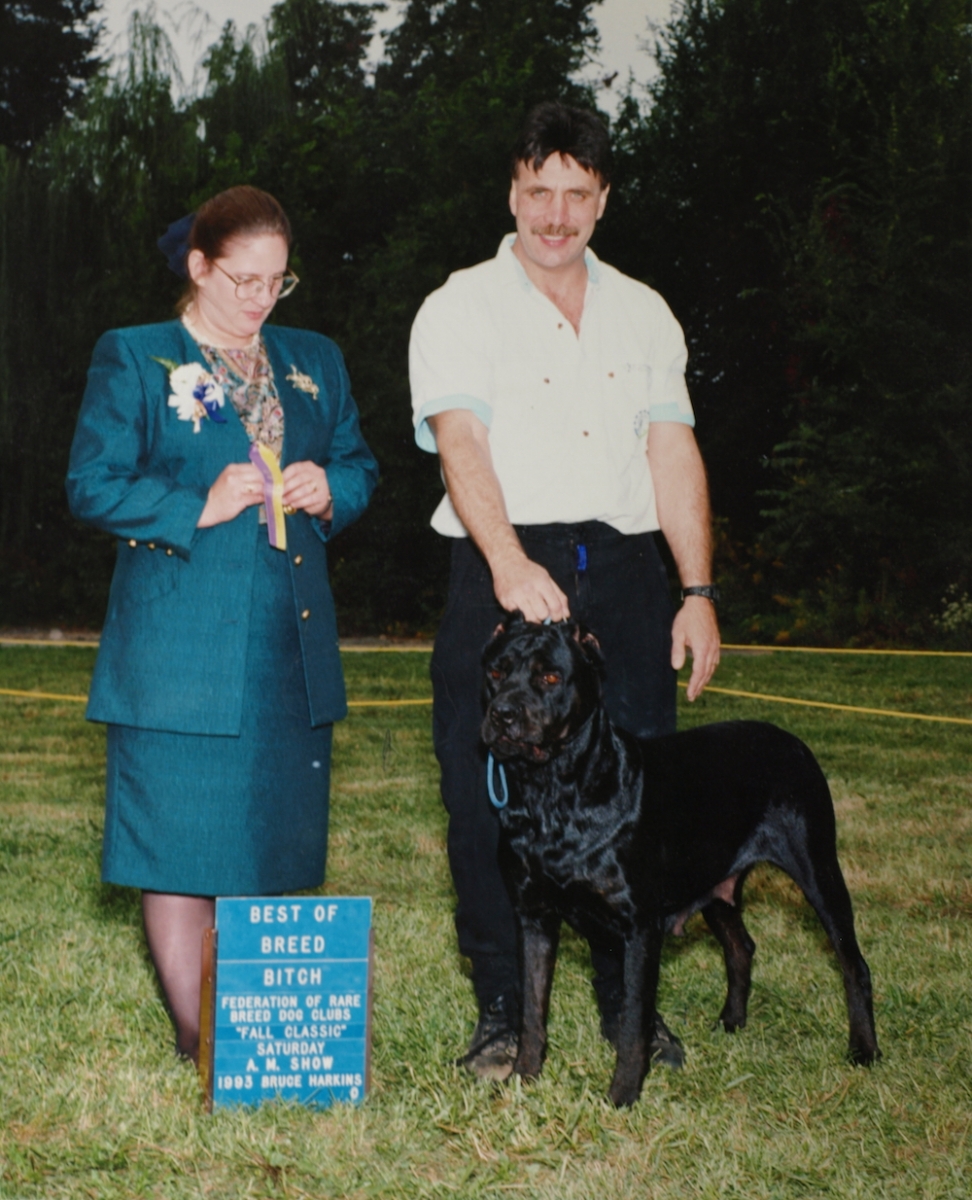 Hodas showing Ch. Midnight.
“I’m most proud of creating a type – everybody knew a Bel Monte dog,” says Ed, who today has downsized, breeding only one litter or so a year himself, and co-breeding with Vicky Dyal of Gator Country Cane Corsos in New Smyrna Beach, Fla., as well as Mike Ertaskiran of Godiva Cane Corsos in Bronxville, N.Y.
In the early years of creating his Bel Monte line, Ed realized the need for an outcross would be inevitable. So in 1995, he imported the black dog “Turill” (Grand Champion Bel Monte Turill). “He had a longer muzzle, and was super athletic, with a shiny coat,” Ed remembers. 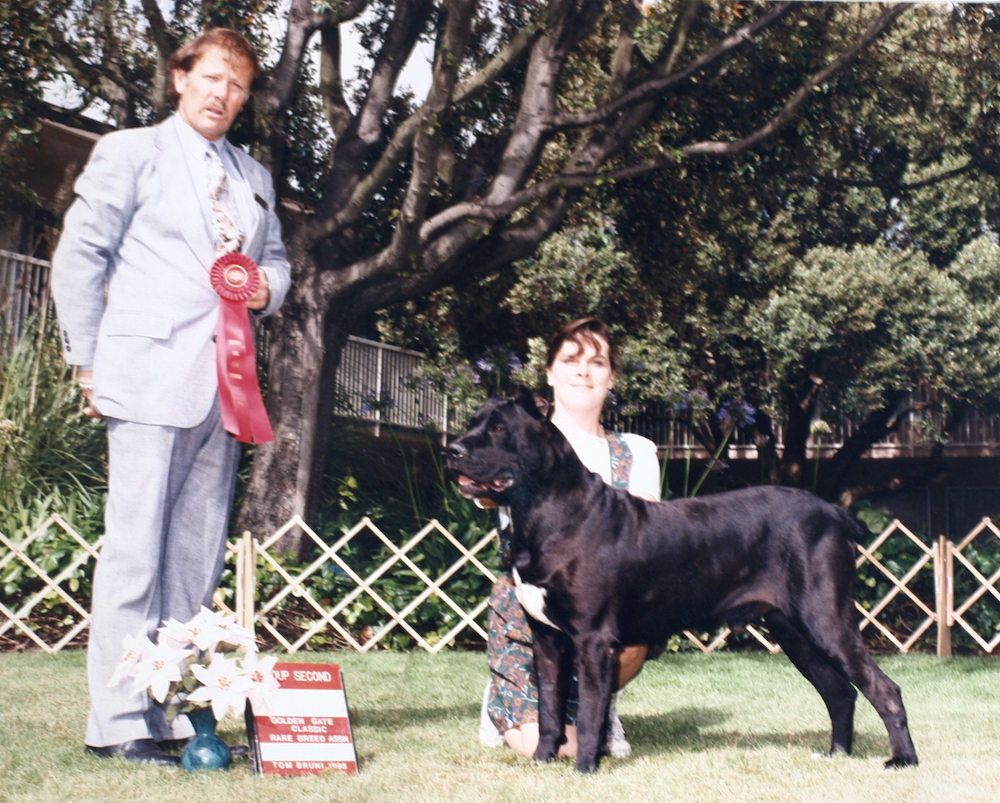 Above and below: "Turill" (Grand Ch, Bel Monte Turill), an outcross Hodas imported in the mid-1990s. 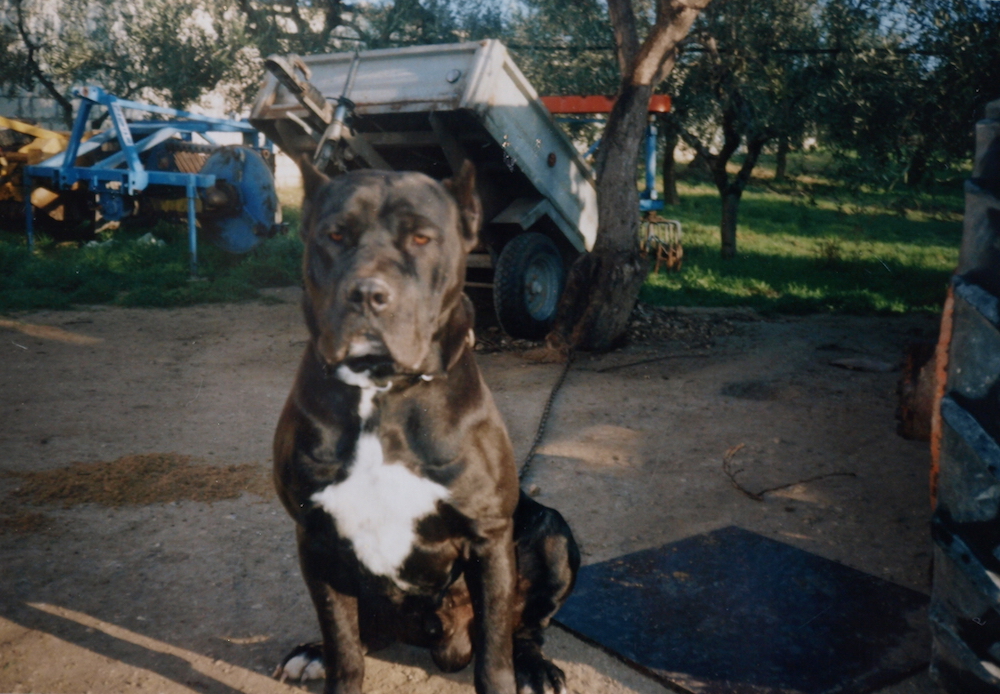 Ed attended dog shows on that trip, and he remembers seeing what American fanciers refer to as “rustic type” Corsos at the Italian shows – dogs with relatively heavy bone and stops that were not too dramatic. They were exactly what he and other breeders at home were striving for, Ed says: “We wanted a big, heavy, well-boned dog that was athletic, but not sloppy.”
But when Ed returned several years later, he says, the phenotype of the dogs had drifted dramatically. “You could tell they had mixed the dogs with boxers. They were badly undershot and prancing around.”
It is here, arguably, that the philosophical schism between American and European fanciers began: With breeding influenced by the belief that a Cane Corso must be in every way distinguishable from Italy’s other high-profile Molosser, the Neapolitan Mastiff, many Italian dogs today are not as heavily boned or substantial as their American counterparts. (Somewhat ironic, considering that in the majority of breeds, the situation is the inverse, with the American iterations tending toward the more elegant and stylized.)
In contrast, most American dogs maintain an emphasis on heavy bone and a relatively longer muzzle and less boxer-like stop. “The thing people forget is that the Cane Corso is a mastiff breed,” Ed says. “They’re getting too fine boned. It’s not an elegant dog – it’s supposed to move with power.” 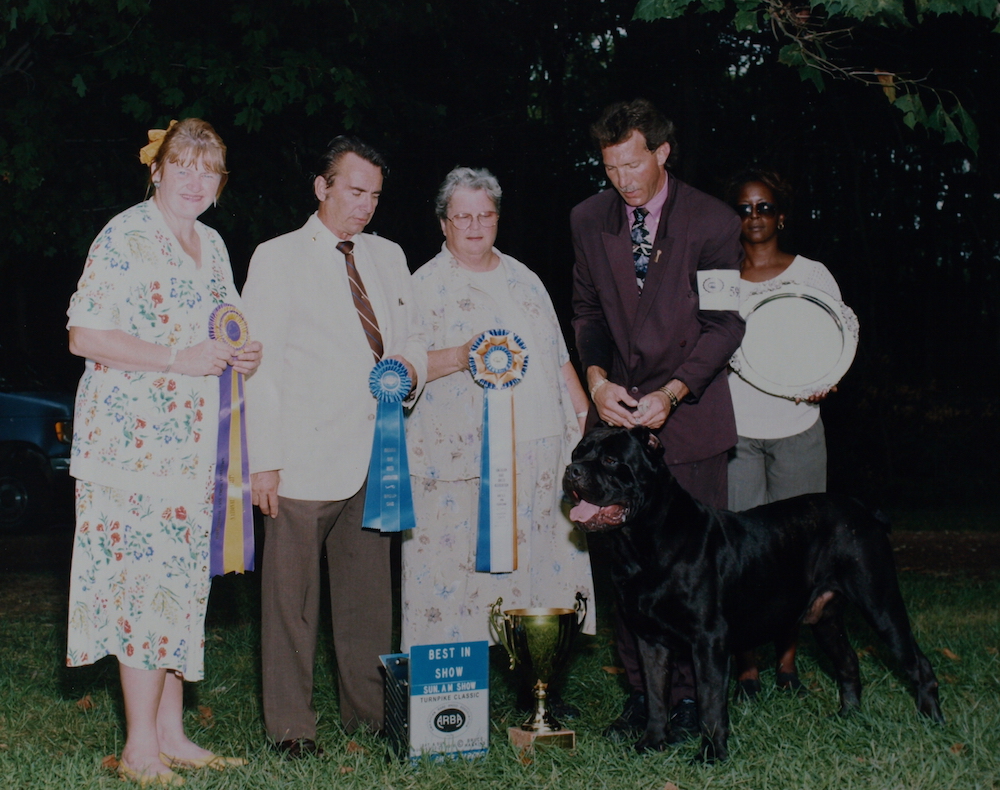 The big-winning Grand Ch. Bel Monte Nero, shown by professional handler Ron Williams. Hodas credits Williams for upping the level of professionalism among Cane Corso handlers on the rare-breed circuit in the 1990s.
In the last decade, Ed says, American breeders have begun to import Italian dogs with much greater regularity. There is an implicit assumption, he says, that Italian equals authentic. “Sometimes, I’d get the ugliest, scrawniest dogs,” he says of imports that were shown to him. “I would have given them away, but because they came from Italy, people thought they were great.”
What is important for everyone to remember, Ed says, is that until very recently, the Cane Corso was in a primitive state of development. In the early 1990s, Mike Sottile attended libro aperto (literally “open book”) certifications where judges from the Italian kennel club green-lighted adult Cane Corsos that met the parameters of the standard. He filmed some of those examinations, and gave the tape to Ed, who notes that on it, “you had dogs looking like Dobes and German Shepherds.”
And now, on this side of the Atlantic, the danger is that the breed will become too streamlined, too fast.
“They’re going to get way overexposed. It’s inevitable,” says Ed about the popularity that will accompany AKC recognition. “I’d rather have them stay in the rare breeds, and quiet. Then, everyone knew what everyone was doing. Now it has just exploded.”
Kristie, who handles the registry, concurs. “I get 10 calls a day from new people, and 75 percent of them can’t pronounce the name of the dog,” she says. 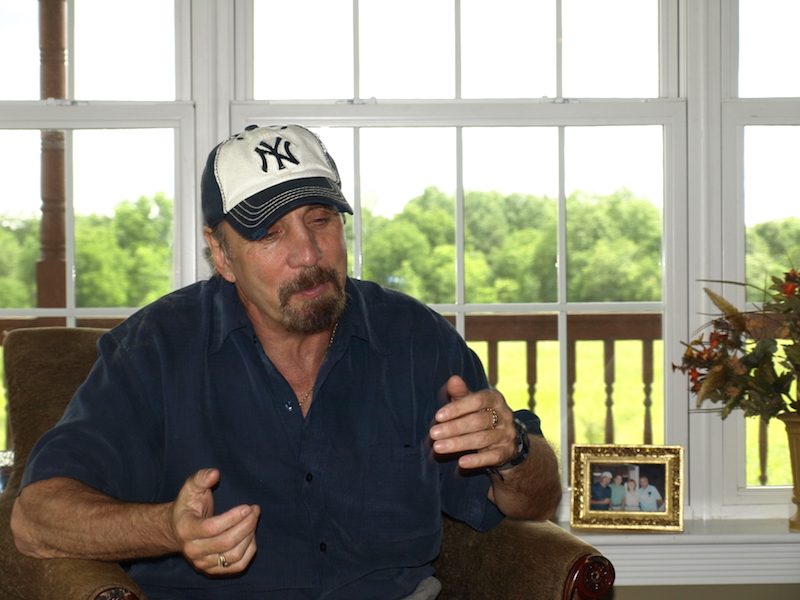 Ed Hodas, still passionate about his breed after all these years.
“It’s ‘cane-NEE,’” one such newbie breeder told her emphatically. (For those who struggle with the Italian-influenced pronunciation, it’s “KAH-nay.”)
No matter what you call them, it doesn’t change what they are: A breed in an exciting stage of its evolution, and one that is certain to cause a stir in the AKC's Working Group ring once the new year rolls around.
© Modern Molosser Magazine. This article may not be reposted, reprinted, rewritten, excerpted or otherwise duplicated in any medium without the express written permission of the publisher.
Sun, 06/07/2009 - 1:32pm