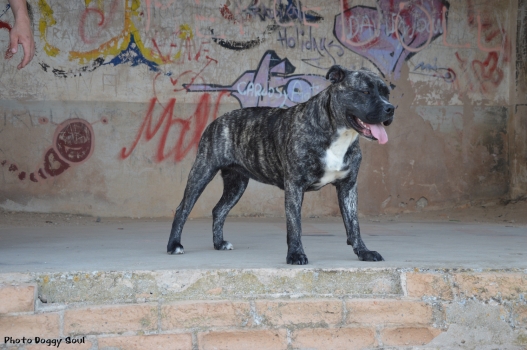 Falling for the Ca de Bou

I discovered the Ca de Bou completely by chance. I came across a woman who was walking one, and I was smitten by this small, athletic dog.   That encounter made me want to learn more about the breed, so I sought out and met with more Ca de Bou owners. Each told me the same thing: The Ca de Bou is a very protective dog, very close to his family, an excellent guard who is very sociable with his humans while remaining reserved with strangers. All this made me want to have my own little Ca de Bou, and so I went searching for my first dog.

I got Ginger in a very high-volume puppy farm, or puppy mill, in France. There are more and more of these disreputable breeders in France because the Ca de Bou has become “fashionable,” and many unscrupulous people want to cash in on them. There are reputable Ca de Bou breeders, but unfortunately not many of them in France. Spain, naturally, has many more.

From Ginger, I learned all about the Ca de Bou, in particular about the breed’s character: These dogs are very stubborn, and know how to manipulate their owners to get what they want. Early on, when I was teaching Ginger obedience, she found it difficult to understand the “Down” command. As soon as I said, “Down,” and made the corresponding hand signal, she looked me in the eye with a blankness that said, “I did not understand.” I quickly realized that this was all a cinema-worthy acting job: She understood very well – she just did not want to do it!

As Ginger demonstrated, the Ca de Bou is extraordinarily intelligent, always looking for something new to do and to get her way, even if she was unsuccessful before. She also gives us a soft, melting look and knows very well that we understand. But beware of giving in, because once you say yes, the Ca Bou will expect it to be that way forevermore! Fenix at the Burning Bird kennel in France. Flor de Can Pioro, bred by the Can Pioro kennel in Spain. 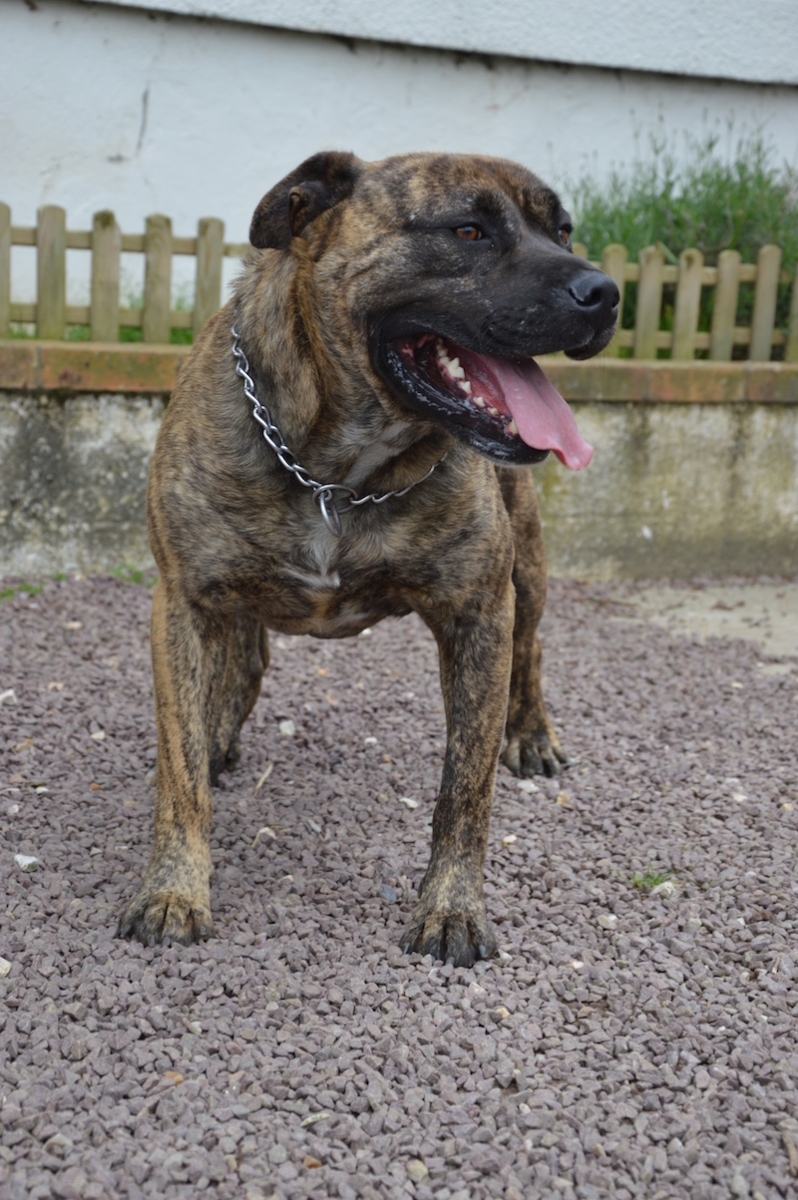 Oldpride Baldo, bred by the Oldpride kennel in the Netherlands.

Despite its heavy frame, the Ca de Bou should be athletic, with a body that is agile and flexible. Originally, the Ca de Bou was invaluable when it came to immobilizing a bull for the butcher; this speaks volumes about his strength and agility. He can compete actively in almost all canine sports and events: This is a versatile dog who loves to learn and work with his master. In France, Ca de Bous participate in agility, obedience, bitework, search and rescue, even doggie dancing.

But again, the Ca de Bou does not learn the same way a Herding dog does. Consider, for example, Ginger and Rock, the Beauceron I owned: While Ginger is very protective and close to me, she is still independent. Rock, by comparison, was a real “pot of glue” who could not live without me.

The Ca de Bou is proud and confident, while the Beauceron is more sensitive and reactive. The Beauceron loves working, learns quickly and has no objection to repeating the same exercise several times; he jumps up at the idea of going to work. But the Ca de Bou could not be more different: He learns at his own pace, and when he decides he does not want to work, he won’t – even if he understands what you are asking of him. He likes to learn, but in small doses, and once he understands what is expected of him, he does not see the need to be drilled on it. A better approach is short review sessions, and short training exercises in general. As I’ve said, the Ca de Bou is very loyal to his master and has a strong protective streak. In some dogs, this will surface very early, but be sure not to confuse a fear response – including little grunts directed at strangers – with protective instinct.

A stable, well-adjusted Ca de Bou will naturally come between his owner and a stranger who is acting abnormally while remaining calm, without showing aggression. If the situation escalates, the dog will adjust his behavior accordingly, at first by showing his teeth and growling. This is a thoughtful, analytical dog that will often spot suspicious behavior long before you do. When Ginger was still less than a year old, we were on a walk, and someone began to follow me. I didn’t even notice until Ginger stopped in her tracks and refused to move forward. Growling, she turned around to face the person, who wisely turned back.

The Ca De Bou must be socialized from an early age, especially the males: It is quite unusual to have males that get along very well with each other, because, generally, the Ca de Bou is rather dominant. This is not a breed that is a good choice for a first-time owner who has no dog experience. If you are going to take your Ca de Bou to group obedience class, I suggest getting in a few sessions with a private trainer; it’s best to instill some basic obedience in your Ca de Bou before moving into a multi-dog environment.

Physically, the Ca de Bou has almond-shaped eyes and an undershot bite (though the lower teeth should not be visible when the mouth is closed). Its top line must be two centimeters (about ¾ of an inch) higher at the rear with respect to the withers. It has no rear dew claws, and the proportion of the skull to the muzzle should be as two is to one. Generally speaking, the Ca de Bou is a healthy dog with no particularly prevalent health issues. If there is one problem in the breed recently, it has to do with type: Increasingly, we are seeing more dogs from countries to the east that have foreshortened muzzles, while the Spanish dogs have longer muzzles. When trying to preserve type, we should always remember that the Ca de Bou is a dog that comes from the island of Mallorca, and the breed standard was developed in Spain.

There are three main colors mentioned in the standard: fawn, which is preferred (and can range into a red tone), brindle and black. Black is the least desired color. Even though the standard only mentions these three colors, we see more and more “new” colors appearing, including black and tan. It seems that in order to “improve” the breed, some breeders have dipped into Dobermans, Fila Brasileiros, Dogo Canarios and Pitbulls, though of course nothing is documented. These three Ca de Bous from the Torre Marina kennel illustrate the three colors and patterns that are permitted in the breed.

When I first got Ginger, many people told me that the Ca de Bou was very much like the Dogo Canario, but over time I began to appreciate the differences in type between the two Spanish breeds. The Ca de Bou is smaller than the Dogo Canario. His head is very different, as is his body, which has a shorter trunk and a croup that is higher than the withers.

In the history of the breed, there have been many crossings to different breeds, but since 1996 there has been a “purge” to remove all untypey Ca de Bous. Today, we don’t see dogs with Dogo Canario influence.

All those years alongside my Ginger strengthened my love for this breed, and my family has enlarged to include five more Ca de Bous. All six dogs live together except for one female, Luna, who does not get along with Ginger. I have to separate them at home, but I can walk them together without any problem. They are very tolerant outside the house, but inside, they argue over who is the pack leader. Ginger, of course, holds that position. Logic would dictate that I leave them to sort things out for themselves, but Ginger is not in good health, and so for her sake I keep them separated. As for the two males, they live very well together, but to keep things that way, they are separated when they sleep and when I’m not there to supervise them. Things can quickly degenerate if an owner is not aware and in control. Among these Mallorcans, fights are violent and can even be to the death.

This year, we decided to breed our first litter of puppies, under the affix “Mallorca Crew.” I am very involved in the breed to increase awareness of it and show its different working skills, which are still relatively unknown. I work in collaboration with Ca de Bou Spain (the Spanish breed club), and as its delegate to France, I recently started a club called Ca de Bou France, to help others in my country discover this magnificent breed.

When people see my dogs in the street or on the go, their first reaction is fear: Often they will cross to the other side of the street, or clasp their children to their sides. It all depends on the color of the dogs – some people think they are crossed with Rottweiler or American Staffordshire Terrier. There has been a big controversy in France about mastiff-type dogs since 1999, when a law was passed that labeled some breeds “dangerous.” Suddenly, people are afraid of everything mastiff.

I wish they could see and appreciate the love that a Ca de Bou has for his master. It is such that our little Izi, when she’s kissing my husband, trembles with joy! Christelle Boury of Nice, France, has loved animals since childhood, especially dogs. She is the founder of Ca De Bou France (www.cadebou-france.fr), which educates people about the breed, helps them find puppies and assists with rescue. Three years ago, she launched Doggy Soul (www.doggysoul-collars.com), which offers hand-crafted collars.

© Modern Molosser Magazine. This article may not be reposted, reprinted, rewritten, excerpted or otherwise duplicated in any medium without the express written permission of the publisher.
Mon, 07/03/2017 - 10:27pm