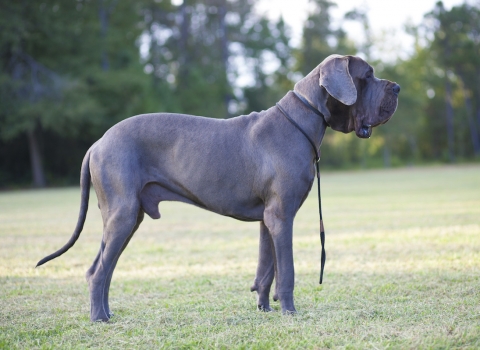 Dane or Mastino? At first glance, it's not quite clear

The more, the merrier … Well, except when it comes to being called a Molosser.

The Fédération Cynologique Internationale categorizes almost three dozen breeds as Molossers in its Group 2, Section 2. But that doesn’t mean all of them willingly accept the M-word. The Boxer, Bulldog, Rottweiler, Newfoundland and Great Pyrenees may be Molossers taxonomically – according to the FCI, at least – but not culturally, which is why you don’t see them in Modern Molosser: Though we made attempts over the years to cover some of those breeds, those who own and breed them simply don’t think of them as Molossers – and, in most cases, don’t want them to be. (Leonberger lovers in particular are horrified at the association: The breed, which predates the formal dog fancy, was envisioned by its founder Herr Essig as a large-sized, long-haired companion dog for the well-to-do, and so philosophically has more in common with a Cavalier than a Corso.)

Perhaps the breed that has been the most vocal about shaking off the Molosser label has been the Great Dane. This August, an open letter to FCI president Rafael de Santiago began circulating on social media, asking the cynological organization to convene a special commission to help reverse the breed’s trend toward what the document called “a dysfunctional, extreme Mastino look-alike.” Calling Europe’s kennel clubs and breed clubs complicit in this “breed assassination,” the letter argued that only a top-down reform – such as temporary veterinary exams similar to those that caused such a furor in the UK several years ago – could rescue the Great Dane from hypertype such as excessive mass and entropion and ectropion (the latter two of which are disqualifications in the FCI standard). It also asks that the FCI remove the Great Dane from the “mastiff type” subsection of Group 2.

Great Dane breeder-judge Maria Gkinala of Ireland penned the letter against what she calls “hippo-types,” which was posted on her Great Dane Gnosis blog. I first came across Gkinala’s blog this spring – in particular her March 2016 post entitled “The Great Dane and the Molosser Malarkey.”

As that headline unambiguously telegraphs, Gkinala think the Great Dane is neither Molosser nor mastiff (there is a distinction, among purists at least), arguing that the Dane is instead a giant galloping hound derived from crossing Renaissance-era mastiffs with Sighthounds.

As evidence, she points to the original Great Dane standard of 1897, which under “General Appearance” notes that the breed “does not have the heaviness and clumsiness of the Mastiff, nor the lankiness and light weight reminiscent of the Greyhound’s shape, but holds the middle ground between either extreme.”

Gkinala also takes exception to the Molosser label, arguing – as others have done before her, in particular David Hancock – that the eponymous dog of ancient Molossia was in fact a livestock guarding dog or a large running hound. The modern definition of Molossers – which both Gkinala and Hancock argue is genetically and morphologically unsound – refers instead to mastiffs, those broad-mouthed, brachycephalic breeds that evolved much later.

“The term ‘molosser’ is void,” Gkinala writes. “When it is not simply a mastiff synonym (or rather pseudonym, because molossers and mastiffs are not the same thing – and this has to be repeated until this tangled mess is finally resolved), it is used to describe nothing more than a big strong rough and rustic – or bucolic – guard dog, or even a cur by any other name, that is even more or less a lupoid mesomorph; it is obvious too that these breeds (mastiffs or so-called ‘molossers,’ ‘pure’ or ‘moderate’) are either modern reconstructions or victims of the show era disease of exaggeration which metamorphosed their originally workmanlike physiques into tragic and monstrous blobs of lumbering mass that could never work as intended. They are in a sense a self-fulfilling prophesy, a cyclical return to Babylon via amplification of the features which millennia or at least centuries of practical and sensible use had smoothed over, even when these phenotypes actually did appear naturally through mutation, or inbreeding – in cases of isolated populations.” Great Danes that have a strong Molosser aspect are being marketed as "Euro Danes." In this case, the overtones of Neapolitan Mastiff are hard to miss.

It’s true that many of our modern breeds no longer resemble their early ancestors, whose form was less of a criterion than their function; in this modern age, that equation has flipped, although no one wants to see aesthetics that are incompatible with a dog’s health and comfort. As for the historical argument, I understand and respect it. It’s just that as the publisher of a magazine that employs the M word in the sense that Gkinala finds objectionable, I just think the semantic distinctions have been superseded.

“The definition of Molosser is, in my opinion and experience, now a cultural one, which does not have much of a relationship to the historical designations that brought us here,” I wrote in response to Gkinala’s post. “… The dividing line appears to be function as much as form: Breed cultures that consider themselves Molossers are those whose dogs have some or all of the morphological traits associated with Molossers, but also who are comfortable with their breed’s designation or original historical purpose as a guardian breed. Again, not necessarily historically accurate, but it seems to be where the dog cultures of these breeds have taken us.”

That’s the reason for the “Modern” in “Modern Molosser.”

Issues of classification aside, let’s get back to Gkinala’s larger crusade – the “extreme hypertype drift” that has overrun the Great Dane, turning the Apollo of dogs into a Harlequinned approximation of Jabba the Hutt. Using clever neologisms such as “Mediterranisation” and “mastiffication” (which reminds of Sherilyn Allen’s brilliant “More Sparta, less Athens” argument vis-à-vis the Mastino Napoletano), Gkinala argues that the Great Dane was never intended to be a mastiff breed, evolving before the inclusion of brachycephalic dogs responsible for producing the Pug and Bullenbeisser. As such, she concludes, the Great Dane is more at home with the Irish Wolfhound and the Dogo Argentino than the Mastiff – with both a little and big “M.” (All three, she argues, would fit nicely in a group comprised of large-game hunting breeds.) A "classic" style Great Dane. Breeder-judge Maria Gkinala says they are being overrun by Mastino lookalikes.

Gkinala blames “an unscrupulous minority” – what she terms “greeders,” a neologism combining “greedy” and “breeders” – for this epidemic of hypertype. In other blog posts, she accuses these proponents of hypertype of attempting to dodge that label by calling their dogs “Euro Danes.” These Mastino-leaning Danes are most common in southern and southwestern Europe – America, Canada and the Nordic countries still breed the houndier, “classic” type that Gkinala advocates – and she suggests that the very wrinkled, massive heads of the blue and black Danes hint at the possibility of crossbreeding to Neapolitan Mastiffs, though that is pure conjecture.

Gkinala says some breeders claim to be breeding “moderate hypertypes,” which, she points out, is an oxymoron. “‘Moderate Euros’ is another marketing ploy to sell dogs that look something like over-sized Boxers,” she writes, “with heads three sizes too big for their bodies, usually with over-curvature and inflexibility (ankylosis) of the neck, struggling to carry the head’s weight … Head and chest emphasis, the all-front no-rear model, and enhanced imbalancethe name of the game.”

In the end, the Great Dane petition garnered 3,213 signatures, though nothing has changed: The Dane retains its Molosser classification, and stays in the corresponding FCI group.

Regardless of where the Great Dane lands, the debate Gkinala has ignited is a cautionary tale for Molossers, too. A “more is more” mentality is a blinking red light in any breed, but even more so in Molossers, in which the glass that is type is already decidedly more than half full. There is nothing more beautiful than a typey, sound, functional Molosser that fits the standard, no more, no less. But in getting there – no matter what the breed – it is imperative that the cup not brim over.

© Modern Molosser Magazine. This article may not be reposted, reprinted, rewritten, excerpted or otherwise duplicated in any medium without the express written permission of the publisher.
Sun, 01/01/2017 - 6:57pm