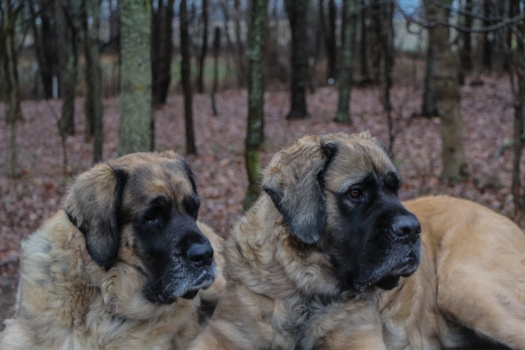 No, it’s not a Leonberger. It’s a long-haired Mastiff.
By
Denise Flaim

No matter what you call them – “fluffies,” “hairies” or “rough coats” – long-haired Mastiffs are instant conversation sparkers for those who have never seen one.

Fred B. Neal of Burlington, Kentucky, owns two fluffies, both of them rescues. The first, Sara, just “kind of popped up” when she was adopted with her littermate sister, Liberty.

“At that point I really didn’t know what a fluffy Mastiff was,” Neal says, adding that after some research he soon realized that purebred, long-haired Mastiffs existed. A short time later, he heard about a Leonberger who was up for adoption. It turned out to be a fluffy Mastiff. Fluffy Mastiffs are often confused with Leonbergers (above), another large breed that shares its development with the Saint Bernard. But on closer inspection, the Leonberger has a far more refined head. The Saint Bernard is the oft-named culprit for the long-haired gene in the Mastiff and related breeds, such as the Bullmastiff.

“If you go out in public with a Mastiff, it always attracts a lot of attention to begin – and with the fluffies, I have to do an awful lot of explaining,” he says. Most people inquire if the dogs are Saint Bernard mixes – a logical guess, since long-ago crosses to that breed are believed to have introduced the long-hair gene into the Mastiff (and, by extension, the Bullmastiff, too). Another popular guess is Leonberger, a German breed that, ironically, is believed to have introduced the long-haired gene into the monks' breeding pool at the Hospice of Saint Bernard.

“Even dog people don’t really know what they’re looking at” when they encounter a purebred fluffy Mastiff, Neal says. “Most vets and vet techs have no clue.”

When it comes to the origin of the fluffy gene, the inquisitive are at just as much of a loss. "Generally the first question people ask when confronted with their first fluffies is: Where does it come from? The question is as difficult to answer as it is inappropriate," writes Hans Rosingh of Lazybones Mastiffs in the Netherlands. "As far as we know it has always been there." As evidence, he points to out that Malcolm B. Wynn, who authored The History of the Mastiff in 1886, says the oldest name he could find for a Mastiff-type dog was a Welsh name that translated more or less as "rough-coated grabber." Rosingh also notes "quite a number of illustrations supposedly of Mastiffs that show long-coated dogs," such as the famous late-18th-Century woodcuts of Thomas Bewick. His conclusion? The Mastiff could have come by its long-hair gene honestly -- and no one can know for sure, anyway.

Coat length can vary among fluffies, with some, well, “fluffier” than others. In fact, despite the fact that a long or wavy coat is considered a fault in the Mastiff standard, some fluffies have even finished their championships, after a bit of barbering to help them along. But other than the wavier, silkier, longer coat, fluffy Mastiffs are the same as their shorter-coated brethren – with one glaring exception.

“One of the things I’ve learned is you don’t give baths late in the day,” laughs Neal, who compares bathing any Mastiff, regardless of coat length, to “washing a car that wiggles.” With long-haired Mastiffs, though, it’s important to factor in drying time for the extra one to two inches of coat that they carry.

When Neal got his first fluffy Mastiff, he was interested in finding out how rare long hairs were, “but no one could give me a number.” One estimate is that one out of every 200 or 300 Mastiffs born is a fluffy, though that number could decrease as breeders use advances in genetics to stop producing them altogether.

Breeders who decades ago oftentimes considered these silky-coated throwbacks a source of shame and consternation can now avoid producing them with the simple swish of a DNA swab: The frilly coat is inherited genetically as a simple recessive, which means that two normal-coated Mastiffs can produce long-haired offspring if they are both carriers. 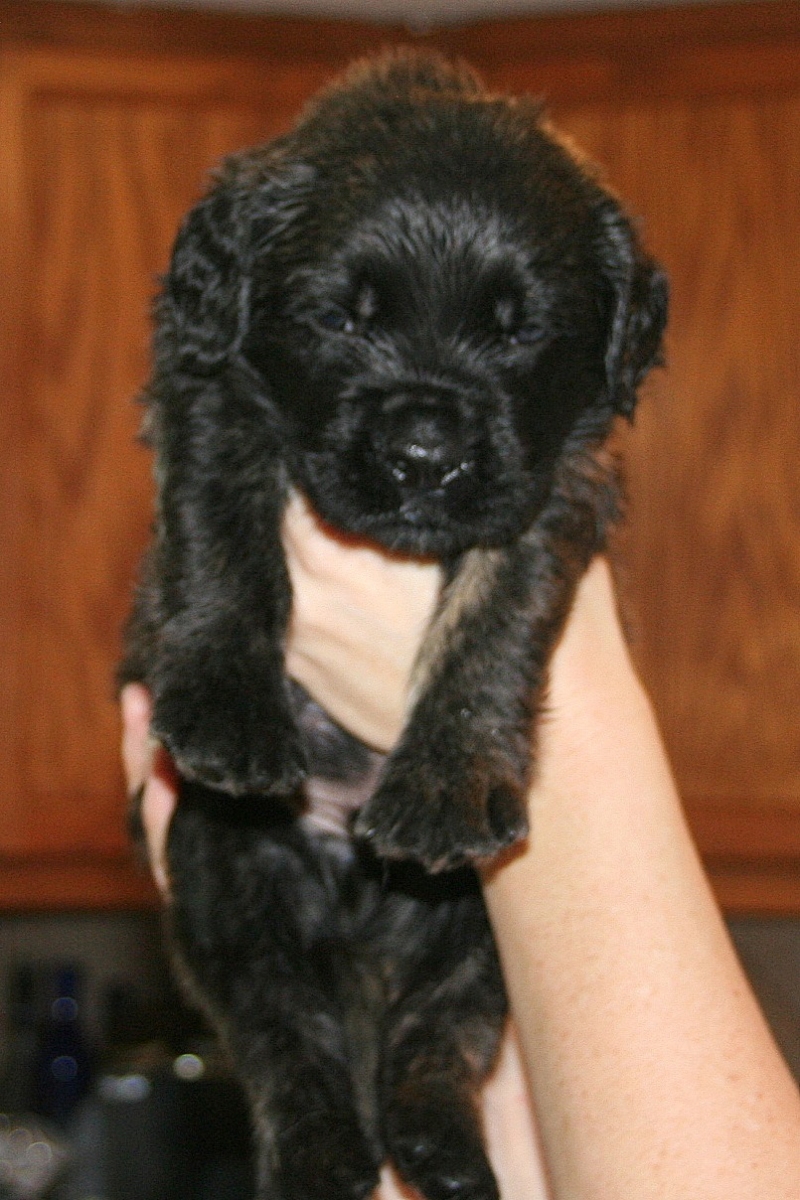 Fluffy Mastiff bred by Tammy Trame Kinkade of Defiance, Ohio. At birth, his coat was “super soft, reminded me of baby fine hair, almost silky,” she says. Compared to the other fluff in the litter, who was very fuzzy, he was sleeker, “more like an Afghan Hound's hair, but definitely with a fuzz factor in there. Makes cuddling with him that much nicer. Kind of like you're own personal teddy bear.” Photo courtesy of Tammy Trame Kinkade.

Catie Arney of KioKee Mastiffs in Hickory, North Carolina, participated in the genetics study that helped developed the test from Ohio-based DDC Veterinary (www.vetdnacenter.com) that breeders can now use to identify carriers of the fluffy gene. But thirty years ago, when Arney unknowingly acquired her first long-haired Mastiff, breeders only knew their dogs were carrying the gene if it cropped up unexpectedly in their offspring.

Arney had been waiting three years to acquire a female puppy from a popular stud dog of the time, and when the youngster arrived, she had a fringe on top – and everywhere else.

“I was devastated,” Arney remembers, especially since the litter’s father had died three weeks before her puppy was whelped, dashing any possibility of getting another show-quality puppy by him.

Determined to finish her bitch’s championship, Arney stripped out her coat and showed her in the summer months, when it would be less voluminous. She eventually got that champion prefix, “though I probably spent four times the amount of money I normally would have,” Arney admits, noting that her bitch took 21 reserves to majors before finishing.

Arney’s biggest regret, though, is not breeding her. “I didn’t because so many people objected, and there was so much prejudice against fluffies then,” she says. “But she was truly a lovely girl.”

Arney says the expression of the long-hair gene can vary, depending on the dog. “Sometimes all you might see a little furring down the front legs, a little fuzz on the ears, and hair that’s a bit longer on the tail. And then there are some that are so hairy they look like Leonbergers.” 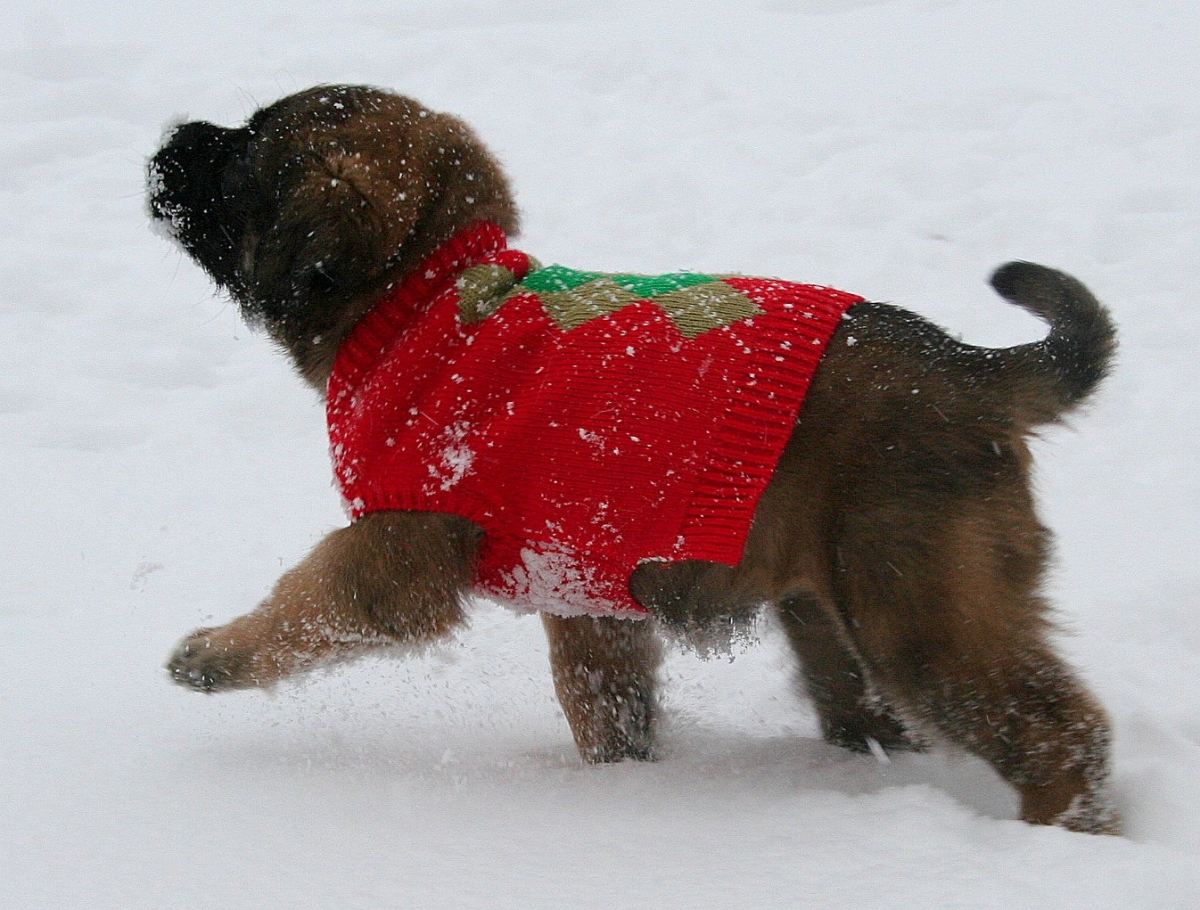 Fluffy Mastiff puppy out for a stroll in the snow.  Photo courtesy of Tammy Trame Kinkade.

The American Kennel Club standard for the Mastiff does not have any disqualifications, though a “long or wavy coat” is specifically listed as a fault. The standard goes on to caution that a dog’s hair “should not be so long as to produce ‘fringe’ on the belly, tail or hind legs.”

But too short a coat is just as much of a problem in Mastiffs, Arney reminds. “We have some Mastiffs with a short, close-lying coat like a Great Dane or Bullmastiff, and that is just as incorrect,” she says.

Arney is emphatically not in favor of changing the standard to accept long hairs, as some other fanciers have advocated. “Long hair is an undesirable trait – just like too much white – and we should breed to eliminate it,” she says. “It is considered to be a cosmetic  ‘fault.’”

That said, Arney thinks there shouldn’t be a stigma attached to long-haired Mastiffs, because breeders can now control the expression of the trait with the available gene test. In other words, if a fluffy Mastiff is bred to another Mastiff that is clear of the fluffy gene, a litter of normally coated puppies will result, though they will all be carriers. If those carriers are in turn bred to clear dogs, each resulting puppy has a 50 percent chance of being clear.

“Long hair is now a manageable breeding fault,” Arney says. “If the dog is a good to exceptional Mastiff and its only fault is long hair, I would use it without hesitation” – and she has. Arney bred to a fluffy male who happened to be both an AKC and International champion, and says she got beautiful litters both times. Not only did the puppies have normal coats, but “I now have puppies and grand-puppies from those breedings that are clear of the fluffy gene,” she explains. “You can use a long-hair Mastiff or a carrier in your breeding program if you test and keep puppies that are clear.”

And, priorities are priorities, Arney reminds. “I would rather use a dog that carries long hair than a dog that carries hip or elbow dysplasia. Some Mastiffs breeders will tar and feather you for using a long-hair dog, but will continue to breed a bitch or dog that had produced puppies” with those severe orthopedic conditions. 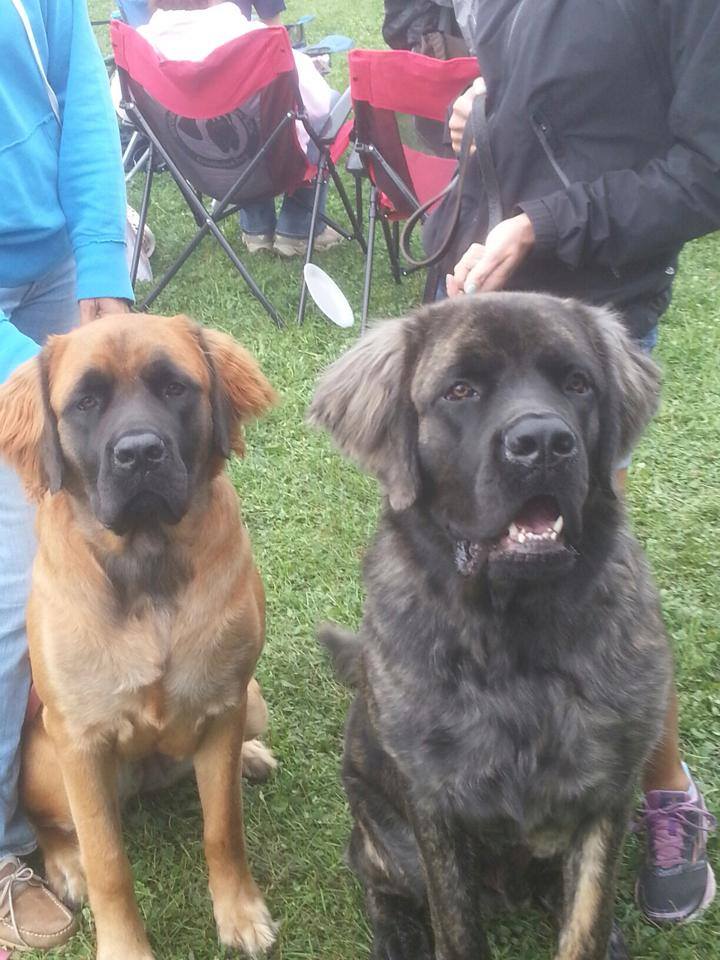 Arney says that long-haired Mastiffs can usually be identified at about four to six weeks, when long hair starts to grow between their toes. At eight weeks, the furring on the ears crops up. She hears some people say that the fluffies have superior bone and size, but she’s also seen some that weren’t of the best quality.

Before moving to Lakeland Township, Wisconsin, last fall, Janet Neff was the Kansas coordinator of Friends of Rescued Mastiffs. She occasionally sees long-haired Mastiffs come into rescue, and has even adopted one herself – a big boy named Brevek, who was found wandering the streets of Junction City, Kansas, as a four-month-old stray.

While she does not breed, Neff suspects that fluffies are still sometimes dumped or culled by breeders who don’t want to admit to having produced them. As for the general public, “I am asked all the time what he is,” Neff says of Brevek. “I have to explain that he’s a fluffy, and it’s a genetic flaw.” In her experience, prospective adopters don’t bat an eye, as the fluffies are “so fuzzy and cute.”

Neff says that besides their silky, curly coats, she thinks long hairs have some unique personality quirks. “It seems like they love snow and water more,” she says, cautioning that her observations are based on personal experience and not scientific data. “I’ve had several Mastiffs, and only my fluffy loves the snow, and we can’t keep him out of our lake.” Mastiffs are not the only Molossers that can be surprised by long coats cropping up in their whelping boxes. Bullmastiffs and even Dogues de Bordeaux have documented fluffies in their breeds, too.

In Bullmastiffs, longtime breeder Carol Beans of Taularan Bullmastiffs in Santa Ana, California, also echoes the similarity to Leonbergers. “It’s uncommon, but the long-haired gene is there.” She says there are telltale signs that can be noted in the whelping box. “As soon as they’re born, they have a coat that shines like a Cocker Spaniel – it’s like a sporting-dog coat,” she explains. And instead having small, leather-like ears, she says long-haired Bullmastiff puppies will start to develop tiny fringes on their ears by the second day. Such puppies are usually born with a heavy black overlay. Nala, the fluffy Dogue de Bordeaux. Some passersby mistake her for, of all things, a spaniel. This photo should leave no doubt that Nala is all Dogue!

Ruth Heggie of Cardenden, Scotland, owns a 5-year-old Dogue de Bordeaux named Nala who is also fluffy. On walks, bystanders are perplexed, thinking she is a mixed breed, or a Labrador Retriever, or even a spaniel.

“We knew something wasn’t right at eight weeks when we went to collect her,” Heggie says. “But having picked her out at two weeks, and having just lost our other Dogue to cancer, we wouldn’t have changed her.”

What makes up for the bit of extra grooming, she says, are the “extra-special fluffy cuddles.”

© Modern Molosser Magazine. This article may not be reposted, reprinted, rewritten, excerpted or otherwise duplicated in any medium without the express written permission of the publisher.
Tue, 11/22/2016 - 11:12am