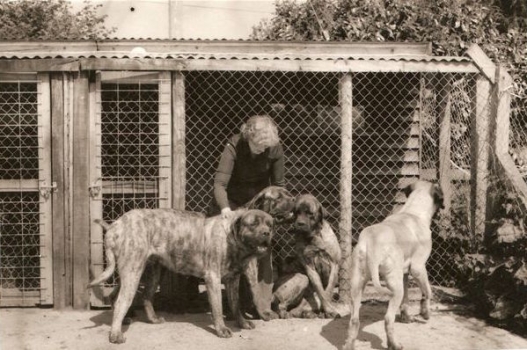 An interview with the long-time Mastiff breeder-judge and author
By
Janine Morffew
Betty Baxter has been called many things in the Mastiff world – icon, living legend, grand dame, to name but a few. And many would say she is the world’s foremost authority on the Mastiff.
Her judging appointments have taken her around the world – America on a number of occasions, Australia quite a few times and all over Europe. The fact she has been asked to return and judge time after time shows the high regard in which these countries hold her opinion. 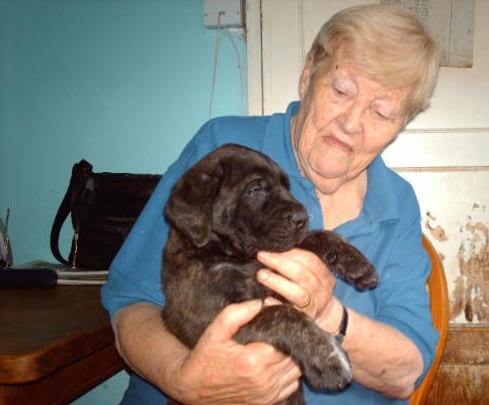 Betty with her last litter.
Betty’s last appointment in the United States was at Bucks County in 2008. She had a record entry, and the judging took all day in freezing weather. Every dog was give a thorough “going over,” even though she was in incredible pain with a bad ankle. (Let us remember she is now in her 80s and walks with a cane.) But it did not stop her, and she did not let anyone down.
Betty has co-authored three books, “The History and Management of the Mastiff” with Mrs. Patricia Hoffman, first published in 1984; an updated second edition published in 2004; and “The Complete Mastiff” with Mr. David Blaxter, published in 1993.  All three books are invaluable to Mastiff owners and fanciers. She is also one of the most generous women I know. The amount of correspondence she gets is incredible, people asking questions and advice, and every letter is answered in detail.  When it comes to pedigrees, there is nothing she cannot answer.
Betty’s involvement with dogs is really life long. Her mother bred dogs, as did her grandfather, Mr. Norman Higgs. Prior to Mastiffs, Betty bred and was highly involved with Rottweilers, German Shepherds, Bouvier des Flanders and Great Danes; the last Farnaby-bred Dane, Kitten, died only a few years ago.
Exhibiting show dogs has always been a large part of Betty’s life, but a little-known fact is the obedience, agility and tracking work she did. Not many women were involved at that time, and Betty used to upset quite a lot of men when her Danes –yes, Danes – would beat police dogs in tracking and agility. Not only is she a brilliant breeder, she is also a brilliant trainer.
As I stated earlier, Betty has been given many labels. But the one I am proud and feel so privileged to use is most dear friend.
How did you get involved in the breed?
In September 1963, I attended a dog show with two Great Danes, one Rottweiler and a German Shepherd, all to be exhibited. My son Hugh was with me, and he was running around looking at different dogs and saw a Mastiff bitch, who happened to be in whelp. He insisted I go to see this bitch, which I did. I was quite taken with her, and when the pups whelped in October, I purchased a brindle puppy bitch.  This was Ch. Taddington Diamond Lil of Farnaby.
What attracted you to the Mastiff?
The size and temperament of the Mastiff appealed to me greatly. Also my mother, who bred West Highland Whites and Scottish Terriers, had spoken of Mastiffs. She had been raised by Norman Higgs, who was a breeder of Mastiffs in Victorian times.  In fact, he wrote the breed notes for the Mastiff for many years in an English dog paper, something I do today. 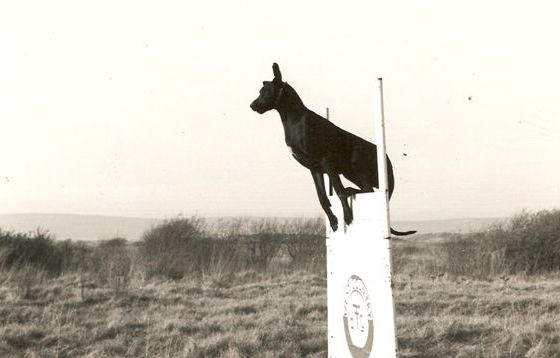 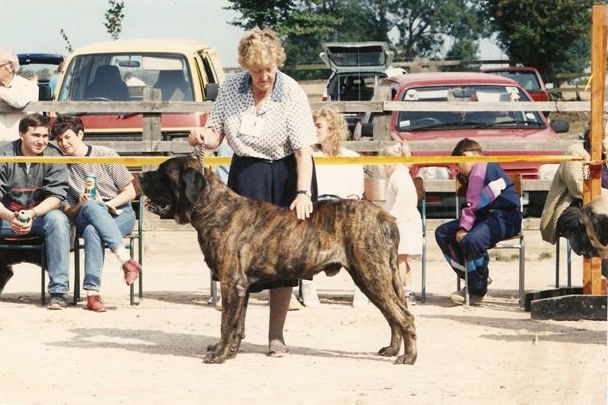 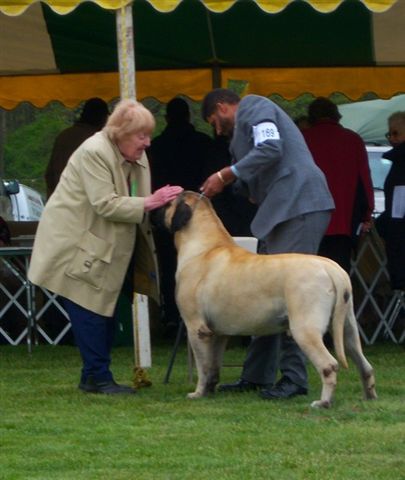 Betty judging at Bucks County Kennel Club in 2008.
What is the biggest mistake the all-rounder judge makes in judging the Mastiff?
All-rounders don’t seem to appreciate a correct Mastiff head and also place so much emphasis on the bite. Many penalize Mastiffs for being undershot when this is allowed per the standard.  And movement, a Mastiff should never glide around the ring like a Doberman. They should power around the ring like a Clydesdale, not a Thoroughbred.
What part of the standard do you think is most misunderstood?
The proportions. Even some breed specialists think Mastiffs should be square in body, like a Bullmastiff, but a Mastiff should have length in body, never square.
What is ideal Mastiff temperament?
Steady, friendly and unafraid, yet be ready to protect and guard if necessary.
Are there any faults you consider “unforgiveable”?
Yes, extreme nervousness; this can lead to fear biting. 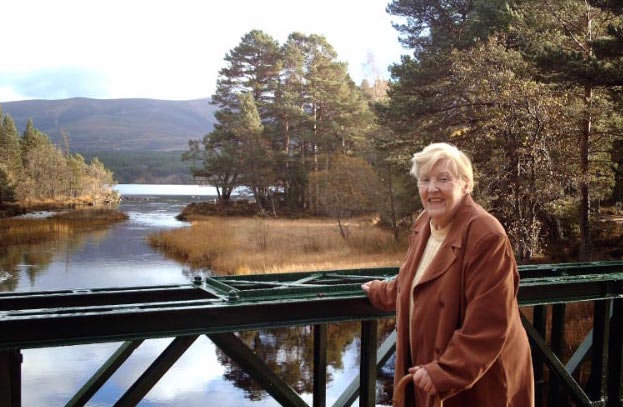 Betty in the Scottish Highlands.
Some call the Mastiff a “heartbreak” breed. Do you concur?
I was once told that Mastiffs will break your heart and your wallet. I am afraid I agree with this.  You never have them long enough, and the cost of vets when paying by bodyweight and food is not cheap.
Do you have a favorite anecdote that sums up the character and essence of the breed?
There was a burglar who certainly picked the wrong house. The only occupant home at the time of the attempted robbery was a 10-month-old Mastiff. A Mastiff will usually let someone in, but they will then keep them there until the owner of the home returns. The burglar went about his business with the Mastiff following him. When he thought he had enough goods, he attempted to leave the home, but the Mastiff would not allow this, and the more this man tried to make his escape, the more the dog stood his ground. Eventually the dog knocked the man down and sat on him. Unfortunately for the burglar, he knocked him onto an electric heater, and the man sustained some quite bad burns.
Who is your favorite dog of your breeding?
That would be my Fred, Ch. Farnaby Fringe Benefit. He had type, soundness, movement and the most wonderful temperament. He was special and a true Mastiff in every sense of the word. 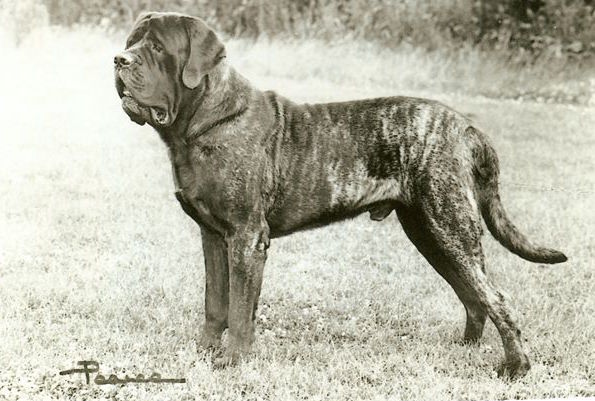 Ch. Farnaby Fringe Benefit (Fred).
What about a favorite dog not of your breeding?
Ch.  Dare Devil of Hollesley. In the 1970s, there were some lovely Mastiffs, and this boy was top class. He had everything – size, substance, head, and moved like a dream. He would hold his own against the dogs of today, I am sure. The only thing I had against him was, he was fawn, not brindle.
Why are you so devoted to brindles? Because they were such “underdogs”?
No, it is just the color I have preferred all along; with my first Mastiff being a brindle, I have stuck with them.  I have had fawn dogs as well as the brindles, but not many. It is all up to personal choice.
Have brindles been discriminated against in the show ring?
Most certainly yes, especially in the 1950s and ’60s. I remember Mrs. Day of Hollesley Kennels, she would never put a brindle up, she did not like them at all. But today there are far more brindles being shown and they seem to be accepted and given a good look. When I started showing with Lil, we had people coming over just to see the brindle Mastiff, there were very few brindles around.
I think there will always be a little bias with some all-breed judges. I would certainly hope that specialist judges these days would look past the color. These days there are far too many brindles being exhibited to be overlooked because of a color prejudice. 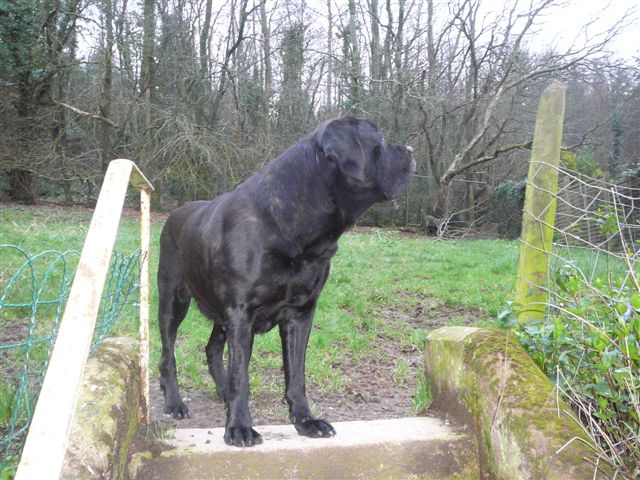 "Jet," Fractious Female of Farnaby.
Does the brindling make it more difficult to see the dog’s conformation?
Not really. Sometimes a brindle stripe, especially on a leg, can alter the look somewhat. But when you judge, you use your hands as well as your eyes and feel the legs and body.
Do you think the quality of the brindling is important -- i.e. a distinct chevron pattern as opposed to “muddy” or more indistinct or uneven striping?
It is to a certain degree, but when judging, color is only cosmetic and many other things are taken into consideration before worrying about that.
From a breeder’s perspective, is it difficult to keep good brindle pattern in one’s line? Can the pattern get muddy if one does not breed for distinct patterning?
I really don’t think so. After breeding brindle to brindle for 40 years, what I do see in the Mastiffs I now produce is that they seem to be much darker.
Some breeders say that brindles mature more slowly than fawns and apricots. Do you find this to be true?
There are lines that mature faster than others, but, no, it’s not color related.
Who are some of the brindle greats that have made a significant contribution to the breed?
Valiant Diadem, the brindle imported after World War 2. Ch. Parcwood W Bear Esq of Lesdon. I will include Ch. The Devil from Wayside as well, though some may not agree due to the Dogue de Bordeaux behind him. 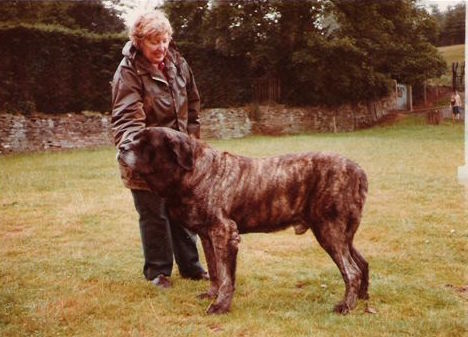 Betty with Ch. Parcwood W Bear Esq of Lesdon.
Tell us a story about a brindle of yours.
Not that long ago I was snuggled down in my bed, having a lovely sleep, when I was woken by my phone ringing. When I glanced at the clock, it was quite late, and I knew by the time I got to it the ringing would have stopped. But the ringing continued on and off. I was debating getting up to see who it was when I heard my neighbor calling out from under my window, “Betty, are you alright?” I called out to him that I was fine, and he informed me the caller was in fact my emergency help line trying to contact me. My alarm was going off at their center.
I went downstairs to see what had happened. My dear Blobbin, my latest Mastiff puppy, had decided to eat my phone, and in doing so had set off the button that triggers the alarm. They were not amused. Some people cannot see the funny side of dogs and their antics.
© Modern Molosser Magazine. This article may not be reposted, reprinted, rewritten, excerpted or otherwise duplicated in any medium without the express written permission of the publisher.
Sat, 03/31/2018 - 4:53pm