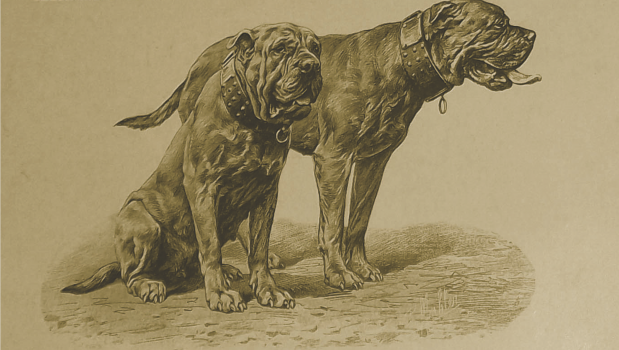 In 1896, Dogue de Bordeaux fancier Jean-Pierre Mégnin described the state of the breed, both in the show ring and whelping box. A fascinating and valuable historical resource, his article illuminates late-19th-Century cross-breeding that to this day surfaces as the drag of the breed.

The Dogues de Bordeaux, like other European dogs, originate from the old Molosser. They got the name Bordeaux from the town of that name where they were always bred in great numbers. The dogs were so wild and volatile that a police mandate was issued to their owners, stipulating that the dogs had to be kept on a lead and muzzled.

Dr. Frank, a contributor to the Stock-Keeper, published a study in the magazine entitled “Comparisons between the French Dogues and the English Mastiff and Bulldog.” In this he compares the Dogue de Bordeaux to the Mastiff. The Dogue de Bordeaux is better than the Mastiff because it has retained the strength of the “Celtic Molossers” and is a true descendant of our famous Alanen. Its strength is astonishing, and it takes a very strong man to stand up to it. Its jaws are formidable. A few good examples of this breed can be found on the Spanish borders, but otherwise they have become very rare. In the Pyrenees, where bullfights and bear fights are still the order of the day, one can still see them in action against these animals. It was only in 1863 in the more modern era that Dogues de Bordeaux were asked about outside their native land and later appeared at the first organized dog show in Paris. This excellent exhibition was held in the Jardin D’Acclimation and patronized by top scientific and artistic personalities.

It was Mr. Pierre Pichot who judged the Working breeds and he said the following about the breed in question:

There is little to report about the Dogues for each individual representative of this large breed really deserves a special mention. This was still a badly selected group. The particular dogs in this group who came to the exhibition were on the whole extremely mediocre, and none of the best English Mastiffs with light coats and dark masks were exhibited. The Dogues de Bordeaux there were judged by Pierre Pichot. Worth a special mention was the bitch Magenta, who was shown by Mr. Radique and won first prize (a gold medal of 150 francs given by the city of Paris.) The second prize (a silver medal of 75 francs) was won by a Spanish Dogue, shown by Mr. Ravaur. Magenta was 70 cm (27.5 inches) at the shoulders, a steely red without a black mask.

The second French dog show took place in 1865, but unfortunately the report on the Dogues de Bordeaux exhibited has been lost. Even if any were exhibited, the next records which we have are those of judges’ reports on Dogues exhibited after 1883. In the picture collection of first-class animals which was owned by Herr Gaint-Genoch can be found a Dogue de Bordeaux belonging to Mr. Fontau, Bataille, a prize winner at the 1883 Tuileries Exhibition. Bataille was only 67 cms (26 inches) high, and was a grandson of Mina, one of the Dogues from the South made famous by the bear and bullfights. She killed several bears on her own and without wearing a collar. Mina was big and measured 76 cm (30 inches) at the shoulder. Bataille had a good stand and excellent build, while his head was not as round as that of the Mastiff, but resembled more a square block, whose circumference measurement cannot be compared to that of any other dog.

At the dog show of 1884, Marius, a brother of Bataille, made his appearance, but with greater height (74 cm, or 29 inches) and in the same color as the English Mastiff but minus the black mask. He received top prize and the metal awarded by the Minister of the Environment. Marius was proof without a doubt, just like Bataille, that the breeder feared that an increase in height through the crossing of Mastiff blood would be to the detriment of the breed. Because in the exhibitions immediately after the one in 1884, among the Dogues de Bordeaux one could only find inferior smaller Mastiffs, and only Marius really provided a satisfactory example of his breed. Had the breeder in question know the opinion of the Englishman Dr. Frank, who placed greater value on the Dogues de Bordeaux than on the mastiff, then he would have been very wary of producing a cross-Mastiff and would have been very careful to retain the particular features of his precious breed. Instead he was content to choose those features which went back to the earlier breeding results of those dogs to whose extraordinary features we owe so much.

At the exhibition in 1888, we find quite a nice dog, admittedly along a number of mediocre ones. This dog, Lion, owned by Mr. Moreul, gained first prize. Among the mediocre black-masked dogs at this 1888 exhibition there were also two good red-masked Dogues de Bordeaix whose coats were deemed too light. These were Ramus, owned by Mr. Blaucher, who took first prize, and a young bitch of promise who, like the winner, obtained a medal from the Minister of the Environment. Marius, owned by Mme. Join, received second prize.

At the 1889 exhibition, three dogs are mentioned. Once again Mr. Moreul’s Lion and Mr. Blaucher’s Ramus were in contention. Lion’s first prize was withdrawn and given to Mme. Join’s Marius, to the annoyance of Mr. Fontan, who wanted the first prize for his 18-month-old dog. The very promising Raval was penalized because of his black mask. The breeder wanted the dog to be judged for the prize despite this.

There is nothing to recount for 1890/91. There are only mediocre black-masked specimens around, and we really thought that the lovely, fine Dogue de Bordeaux breed had lost the interest previously shown to it, except that a newspaper carried a section, “Essay on dog breeds,” which made such an impression on Dogue de Bordeaux owners that in 1892, Mr. Eisler appears at exhibitions in Paris, Rouen and Epa with Buffalo and Sultane. Both these dogs were registered as being genuine, similar types that could serve as a basis for the breed characteristics. They were neither Mastiffs nor Bulldogs, but stood between these two breeds. Their body resembled that of the Mastiff in build but their skull circumference was far greater in proportion to the body. The flews, especially the lower ones, hung down like those of the Bulldog. The lower jaw, like that of the Bulldog, protruded a centimeter in front of the upper jaw. This feature was not visible with the mouth closed, as the flews hid the lower jaw. Likewise they also had no black mask, and the coat was similarly light red. We note that both these dogs could serve as characteristic models of the Dogue de Bordeaux breed, and we give a description of them here. Sultane and Buffalo: “Neither Mastiffs nor Bulldogs …”

Body stocky and powerful, a little smaller than that of a Mastiff but on the whole very similar; wide chest; strong bone; very powerful movement; throat/neck like a bull; heavy temples, and a wide, square forehead; short, broad muzzle; lower jaw protruding one centimeter forward of the upper jaw, but this feature is nevertheless hidden by the flews, which are large and drooping. The skin around the head is very loose and produces pronounced folds in the cheeks and around the flews, making even, symmetric folds, which nevertheless should not be too deep on the forehead  or around the eyes. The color is a quite consistent, pale red, lighter or darker without the black mask but with something reddish or truffle-brown reddish at the front. Sultane: Most striking, “the colossal head, interlaced with wrinkles.”

In connection with the outstanding Dogues de Bordeaux, our colleague from the Stock-Keeper in London, who was the judge at the 1892 exhibition in the Tuileries, was so taken with his inspection of Mr. Eisler’s dog that he published an article beside a picture of Sultane in his magazine of July 22nd of that same year.

It is here in particular that Sultane, Mr. Charles Eisler’s excellent bitch, comes into her own, winning first prize two years running and again the same year receiving the special prize of Paris, while Raoul was picked out for special praise for the section. The picture shows a successful photo of this formidable animal as it sits in the garden of the Tuileries, looking like a sculptured stone statue with its wide chest.

This article gives readers a better idea of this extraordinary breed, excellently depicting its powerful body and strong, solid build. What is most striking is the colossal head, interlaced with wrinkles; the broad muzzle; the heavy, drooping cheeks, and the strong jaw, which can deal such terrible bites. A profile photograph would have shown how the most forward part of the muzzle is slightly curved. If one lifted the heavy flews, one could see the terrible weapons; the teeth are as big as those of a dog twice its size.

Sultane’s color is fawn like a lion, with a reddish head and with cropped ears. The article gives no further reference to her derivation other than that she was born on May 5th, 1889. Caporal: Known as “The Invincible.”

Caporal, owned by Messrs. Delaut and Maurez, deserves to be added to our select list of outstanding Dogues de Bordeaux. Caporal’s heyday was around the year 1889. He was never shown at the Tuileries exhibition, but he was very well known at the foot of the Pyrenees, where the bullfight championships took place and where he was given the title “The Invincible.” His head was covered in scars. At this time Caporal belonged to a Mr. Farniere, who ran a railway network in Tarbes. He was bought by Messrs. Delaut and Maurez in his last years to serve as a stud dog.

At the end of our article no. 5 on Douges de Bordeaux, Caporal was mentioned as a powerful Dogue de Bordeaux and one of the best fighters. To give more idea of this great animal, at the age of seven years his weight was 108 pounds and his height 63 cm (24.8 inches). His color was a very pale red, the lower jaw protruding slightly below the upper jaw. We noticed that Mr. Maurez devoted himself to the Dogues de Bordeaux with much success. For another stud dog he had Roland, a fine dog who received first prize and the prize of honor donated by the President of the Republic. Roland was out of Raoul and Zulln. Othello: “One of the new generation of top Dogues de Bordeaux.”

Othello, bred by Mr. Maurez, was sold to Dr. Fiard of St. Etienne. Whelped on March 28, 1893 of Marius and Rames II, Othello can be considered one of the new generation of top Dogues de Bordeaux. The mask a darker shade of red, otherwise lighter red; a wonderful, strong wrinkled head, the face being extraordinarily wrinkled; a wide chest; strong paws, and so on. Othello was reported in the article at the age of 13 months together with Buffalo and others in the same class under the breed section of: various dogs and guard dogs at the St. Etienne dog show in April 1894. At this exhibition, Othello received second prize and Buffalo the first prize.

Othello competed again at the dog show in Paris in May 1894, but the judge gave none of the red-masked Dogues de Bordeaux a prize, with the exception of Buffalo, who, because he had already received the prize of honor, was awarded second prize. All the other black-masked Dogues received awards. This can only be put down to sheer ignorance, lack of understanding or mere whim on the part of the judge! Loss of Faith
An excess of excess had prompted this Neapolitan Mastiff devotee to walk away from the breed she loved. But is there a glimmer of hope in the offing?